2022 Road to the Kentucky Derby Leaderboard 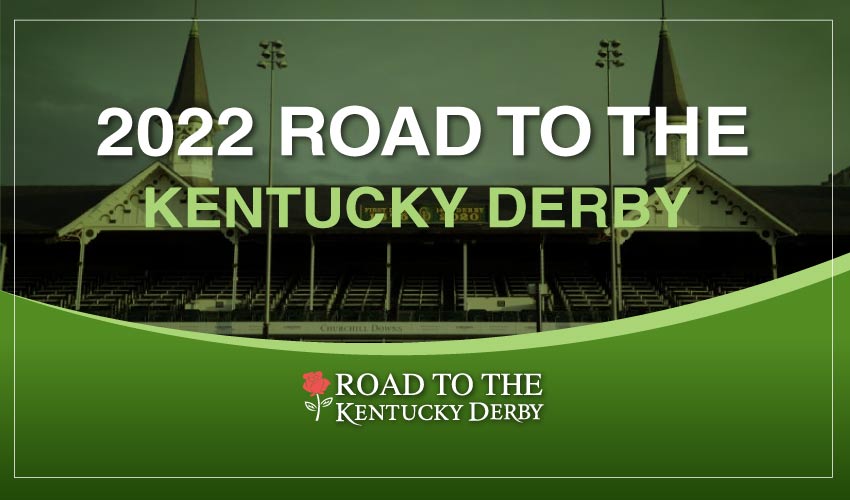 Interest around the 2022 Road to the Kentucky Derby Leaderboard increases with every week that passes, with horses moving in and out of consideration as plans change and new names come to the fore. Here we look at the top 26 horses on the Jazz future book and provide an insight into how they might make their way to Churchill Downs on the first Saturday in May.

G1 Breeders’ Cup Juvenile winner; champion two-year-old colt, unbeaten in three with powerful displays of front-running; potential targets may include the Robert B Lewis on February 6 and the San Felipe on March 5, both at Santa Anita

Won G1 Champagne; favourite for BC Juvenile until injury intervened, unbeaten in two with a big reputation; will resume training early next year, with a campaign embracing the Fountain Of Youth and Florida Derby at Gulfstream Park

Winner of G3 Bob Hope; two-for-three and has emerged as trainer’s second-string behind Corniche; expected to bid for Road to the Kentucky Derby points in the Grade 2 Los Alamitos Futurity on December 11

Fourth G1 BC Juvenile; a three-race maiden but obviously has plenty of ability and may suit patient tactics; will return to training in Florida in January, with the Holy Bull at Gulfstream Park a potential early target

Runner-up G1 BC Juvenile; two-for-five, G2 winner and is improving with experience and distance; will be based at the Fair Grounds in New Orleans and may start campaign in the Lecomte on January 22

G1 Breeders’ Futurity winner, kept out of BC Juvenile by minor injury; two-for-four and winner over a mile-sixteenth at Churchill Downs; potential targets include the Risen Star at Fair Grounds on February 19 and the Rebel at Oaklawn Park a week later

Fifth G1 BC Juvenile after winning G1 Del Mar Futurity; two-for-three but has only ever raced at Del Mar; campaign will depend on options for barnmates but the Sham and the Robert B Lewis at Santa Anita may be targets

Third G1 Breeders’ Futurity behind Rattle N Roll; one-for-two, pedigree suggests he will be classy and very tough; expected to run in the Grade 2 Kentucky Jockey Club at Churchill Downs on Saturday

Won G3 Nashua after fourth behind Corniche, Pappacap in Santa Anita G1; two-for-three and plenty of speed; another whose progress will depend on stablemates but the Sham and Robert B Lewis are obvious possibilities

Maiden from two starts at Churchill Downs, son of Gun Runner; never gone beyond six and a half furlongs and first task is to get a win under his belt

Won G1 BC Juvenile Fillies, Frizette and Spinaway; unbeaten in four and certain to be champion two-year-old filly; only two fillies have run in the Kentucky Derby this century and she will likely be prepared for the Kentucky Oaks

Third G1 BC Juvenile on stakes debut; two-for-three and bred to improve considerably as a three-year-old; will be trained out of Gulfstream Park this winter and the Holy Bull on February 5 is a possible target

Fifth G1 BC Juvenile after third behind Corniche and Pappacap in Santa Anita G1; only one-for-five but has stamina and the Robert B Lewis could be a target

Easy winner of Keeneland maiden on only start; an intended runner in the Grade 2 Kentucky Jockey Club at Churchill Downs on Saturday

Dual stakes winner, both in state-bred heats at Gulfstream Park; three-for-four and stays a mile-sixteenth but has never met open company

Stakes winner by seven lengths at Santa Anita; unbeaten in two, but never gone further than five furlongs and off the track since June

G1 Hopeful winner but well beaten G1 Champagne behind Jack Christopher; two-for-six and winner at Churchill Downs but less scope to improve than some

Won G3 Iroquois over mile-sixteenth at Churchill Downs; unbeaten in two but out of training after that; expected to return to work in Florida in January

Fifth G1 Del Mar Futurity behind barnmate Pinehurst when odds-on; one-for-two and campaign will depend on paths taken by currently superior stablemates

Three-time stakes winner, most recently at Aqueduct; four-for-five and lots of speed; scheduled for a break now and will try to stretch out in distance early next year

Two-race maiden, beaten by Winning Map on debut and at odds-on latest; never gone beyond six and a half furlongs and further experience required

Runner-up G3 Iroquois at longshot odds behind Major General, then last of 11 in G1 BC Juvenile; two-for-five and stamina is a plus

Third G3 Bob Hope behind barnmate Messier; one-for-two and a little way down the barn pecking order but still a candidate for the Sham and Robert B Lewis

Third G1 Champagne behind Jack Christopher; two-for-four and G3 winner who is prone to slow starts; the Holy Bull and Fountain Of Youth may be considered

2022 Road to the Kentucky Derby points standings (next race/update Nov. 27)

Sign up and get a 10% rebate. Make sure to stay tuned for the latest Horse racing odds, Kentucky Derby Future Book and racing entries

Follow us on Social Media for instant 2022 Road to the Kentucky Derby updates!