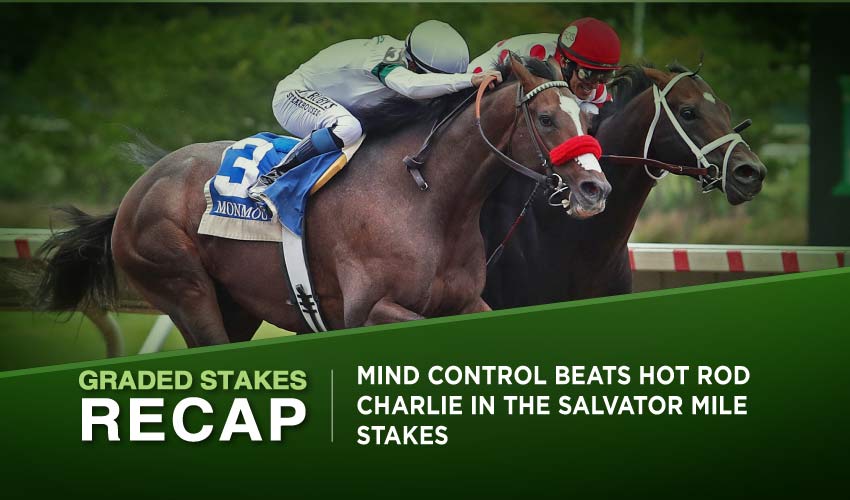 Things didn’t go wholly to plan for bettors at Monmouth Park on Saturday, when Mind Control fought hard to land the feature G3 2022 Salvator Mile from the overwhelming favorite Hot Rod Charlie. There was another setback for chalk players when Stolen Holiday ran away with the G3 Eatontown, but they got a little back after Sacred Life became the latest Chad Brown weekend winner in the G3 Monmouth.

The scene was set for hot-shot Hot Rod Charlie to make a successful homecoming in the Salvator Mile at Monmouth Park on Saturday, but the 1-5 favorite was upstaged by the tenacious Mind Control, who prevailed after a thrilling stretch duel.

Mind Control broke on top under John Velazquez and took them along until Hot Rod Charlie muscled his way to the front off the turn, but the 2-1 second-choice wouldn’t lie down and fought bravely to regain the lead in the last two jumps, getting home by a head, stopping the clock in 1:35 and four-fifths. Shirl’s Speight was more than six lengths away in third.

This was the third G1 score for the Todd Pletcher-trained Mind Control and his first for almost three years. His main summer target may be the G1 Forego at Saratoga on August 27, in which he was fourth last year.

Holiday allowed to steal it

There was a mild upset in the Eatontown when 8-1 shot Stolen Holiday stole the race from the front, going gate-to-wire to post her first success at stakes level.

The mare was left alone to set strolling fractions under Jose Lezcano and had plenty left in the tank for the stretch run, driving clear and holding off the late rally of barnmate Vigilantes Way to win by a length, with Lemista keeping on late for third, two and three-quarter lengths further back. The favorite Fluffy Socks was fourth; the clock showed 1:42 and one-fifth.

“Her last race was on soft and that’s not what she wants. She’s got speed, and when she threw up that slow first quarter I thought they’d have a hard time beating her,” said trainer Shug McGaughey.

Chad Brown was out of luck with the favorite in the Eatontown, but collected his usual Saturday prize when Sacred Life got off the mark for 2022 with an authoritative score in the Monmouth.

The even-money favorite was kept away from the steady fractions laid down by longshot Epic Bromance until Manny Franco set him running around the turn. Sacred Life got to the leader in mid-stretch and hit the front at the sixteenth pole, rolling on to win by a length and a quarter from Safe Conduct, who took the silver medal by a half-length from the game Epic Bromance. The time was 1:47 and three-fifths.

“I didn’t want to give him too much to do, but when I asked him, he responded,” said Franco. “He can go even longer if they want him to do that.”

Stay tuned for the latest Breeders’ Cup Odds. Check out the World’s major Racetrack entries and don’t forget to Sign-up and get up to a 10% horse rebate. We offer the best promotions!