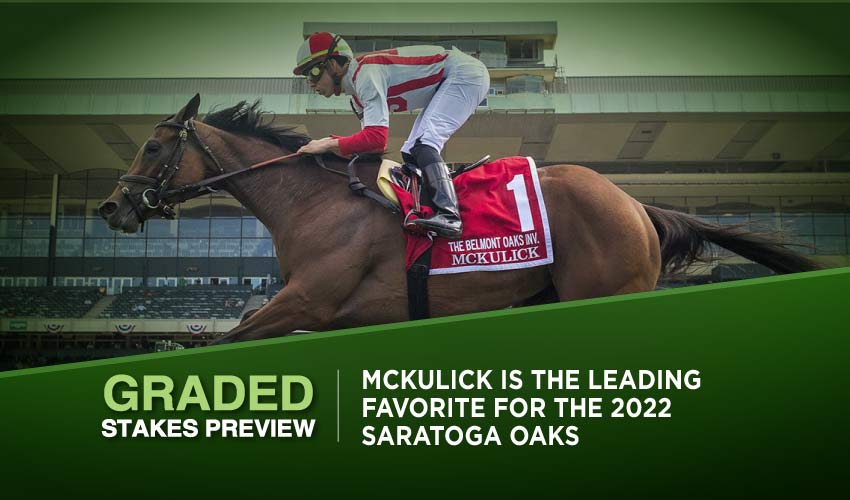 On Sunday, two G3 events are planned for the Saratoga card. At first, two-year-fillies will strive for their premiere Graded success in the G3 Adirondack Stakes, where Naughty Gal is the leading chance for now after showing lots of ability in her maiden victory. Later on, three-year-old fillies will clash in the G3 2022 Saratoga Oaks on the turf surface, with G1 victress McKulick undertaking the role of the favourite. Still, the rest of the field also boasts lots of quality.

The G3 race is meant only for two-year-old fillies who will cover the distance of six and a half furlongs. On the dirt surface, six contestants will vie for the purse of $200,000, while Janis Joplin is the only of them with a Graded experience.

The Mark Casse bound bay has two outings under her belt, both resulting in third places. At first, she faced maidens in June, and in July, she headed into the G3 Schuylerville Stakes over six furlongs. Back then, she trailed in the last place, but her finish was quite nice; therefore, the daughter of California Chrome should be respected for the Adirondack Stakes.

A couple of fillies has bumped into some Listed company, namely Sabra Tuff and Damaso. The former is trained by Dallas Stewart and broke her maiden in her debut in Churchill Downs by a neck, upon which she hit the distance of six furlongs in the Debutante Stakes. Back then, Sabra Tuff also ran in the rear of the field, yet her jockey remained patient until the final stretch, where he easily managed to navigate his mount in between her rivals.

Finishing at the rail, Sabra Tuff was no match for the victress, but her effort was admirable. Damaso smoothly scored her debut and then ran in third in a Listed company, leaving behind just a couple of rivals, though. She’s the outsider of the field, but as we know, such races for two-year-olds tend to spring surprises and even underestimated juniors can come up with an incredible boost in their forms.

The remaining trio will make their Graded premiere on Sunday; however, none of them could be tossed aside, especially Naughty Gal. The Wayne Lukas trained daughter of Into Mischief commenced her career with fourth place, but in a month, she showed up in Churchill Downs once again to put on an impressive performance.

The bay had a great start, settled in second, and upon taking command in the final stretch, she beautifully opened up to triumph by more than nine lengths. Despite running only for the second time, she looked quite professional. Promise of Hope and Apple Picker have just victorious debuts under their belts, both very promising, both decisive, but at first sight, Promise of Hope looked a bit classier when pulling away from her rivals.

She was green yet willing to do as the jockey asked. Still, Apple Picker delivered a fine run as well, making the whole race from the front and scoring it smoothly.

Naughty Gal whose maiden victory was effortless, and on Sunday, she should at least fight for the win once again.

An attractive field of six three-year-old fillies heads into this G3 turf race, where the participants will cover the distance of a mile and one and a half furlongs. The purse of $700,000 lured in especially McKulick, the Chad Brown bound bay with a G1 victory under her belt.

The daughter of Frankel was born in the United Kingdom, where she recorded a maiden win, upon which she was shipped to the US and finished third among the G2 company. In 2022, she hit the track three times. At first, she took second place in the G2 Edgewood Stakes behind New Year’s Eve and the G3 Regret Stakes behind Walkathon, but last time out, McKulick earned the G1 glory in the Belmont Oaks.

Under Irad Ortiz, the bay filly had a lovely gallop in fifth and then unfolded a brilliant finish in the final stretch to better With The Moonlight by one and ¾ of a length. She’s still progressive and already very classy; therefore, she’s expected to be a tough nut to crack again.

Indeed, she got bettered by a couple of her Sunday’s rivals, but on both occasions, these fillies had more peaceful trips. Prior to her Edgewood Stakes success, New Year’s Eve finished third in a Listed race and wasn’t really anticipated for that Churchill Downs feat, yet after spending the whole race in the last place, Luis Saez urged his mount to improve her position in time.

Thanks to this manoeuvre, New Year’s Eve rallied forward in the final stretch and scored it before McKulick, who was only about to open properly. In the G1 Belmont Oaks, New Year’s Eve didn’t have such a marvellous run and took only eighth place, unlike mentioned With The Moonlight.

The Charlie Appleby bound British raider failed to impress in the Epsom Oaks; however, her performance in the Belmont Park was a solid one, and the daughter of Frankel needs to be respected again.

Walkathon completed a victorious hattrick by her Regret Stakes triumph, and given it was quite an easy one, she could be good enough to strike gold even in Sunday’s competition. Besides McKulick, Chad Brown also relies on Contemporary Act, a commanding victress of her second career run, and Listed placed Oakhurst.

McKulick, thanks to her recent G1 success among the elite, and if she gets a good trip, she should score another big one. Walkathon could be her biggest threat.