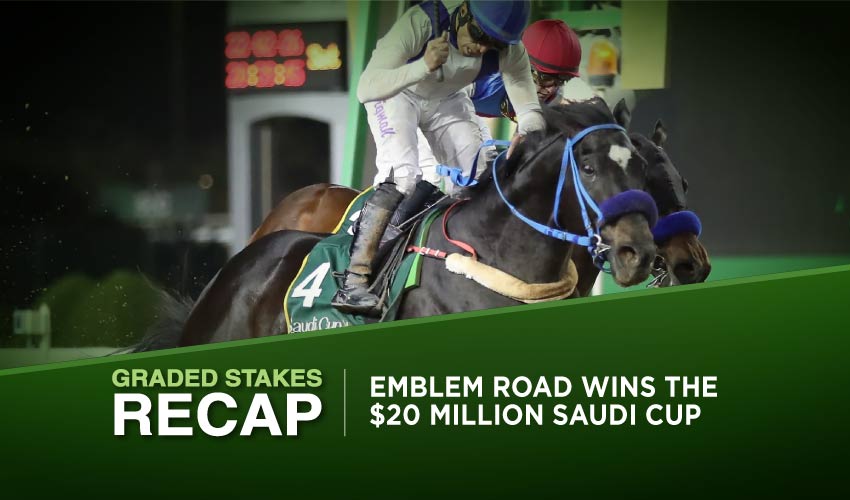 There was big money on offer and a huge shock in store at Riyadh racecourse on Saturday, as the local hope and colossal longshot Emblem Road saw off some of the best horses in the world – including top-level winners from Britain, France, the US, and Japan – to win the $20 million Saudi Cup, the richest race on the planet. Here is our 2022 Saudi Cup Recap.

Well, that was unexpected.

Like a gatecrasher at an exclusive party, the unconsidered Emblem Road – trained locally by Mitab Almulawah and ridden by Wigberto Ramos – caused a mighty upset in the richest race in the world when battling to victory in the $20 million Saudi Cup at Riyadh racecourse on Saturday.

The Saudi Cup was expected to showcase the brilliance of some of the best horses in the sport, last year’s winner Mishriff, recently confirmed Kentucky Derby winner Mandaloun, the Japanese ace T O Keynes, but all of these and more big names beside ran hugely disappointing races. Not so Emblem Road, who produced the performance of his life to keep the $10m first-place prize-money at home, paying off at odds that varied from the 50-1 declared by European bookmakers to the 114-1 available in the US mutual pools.

“I was really excited about this horse,” said Ramos, who rode with distinction in the US through the 1990s, and who has been a multiple champions in Saudi Arabia. “He likes to come down the outside so I was happy where I was. I didn’t hear anything in the straight, I was just watching the finishing line and thinking ‘I want to get this thing done.

“This is the best moment of my life. In two or three years I will retire, but right now I’m not thinking about that. I’m very happy to win one of the biggest races in the world.”

The winner, a four-year-old son of Quality Road, had nothing to do with the early pace set by Secret Ambition, but made significant progress from the three-quarter pole and moved into a challenging position early in the straight.

With a furlong to run the race seemed between US shippers Country Grammer and Midnight Bourbon, but Emblem Road was now in full cry down the centre of the track and grabbed the lead in the final sixteenth, crossing the line half a length ahead of Country Grammer with the fading Midnight Bourbon a length and a half back in third. The time for the nine furlongs was 1:50 and one-half.

The first four in the betting market could finish no better than eighth place for T O Keynes. Mandaloun was ninth, Real World 11th, and Mishriff stone last of the 14 runners. The remaining US challenger Art Collector came home 12th.

This victory took Emblem Road’s record to seven-for-nine, with all his wins gained at the Riyadh circuit. His next target may well be the $12 million Group 1 Dubai World Cup at Meydan on March 26, which could also be the next stop for the runner-up, who ran a superb race on his first start for nine months.

Follow us on Social Media for instant 2022 Saudi Cup Recap!