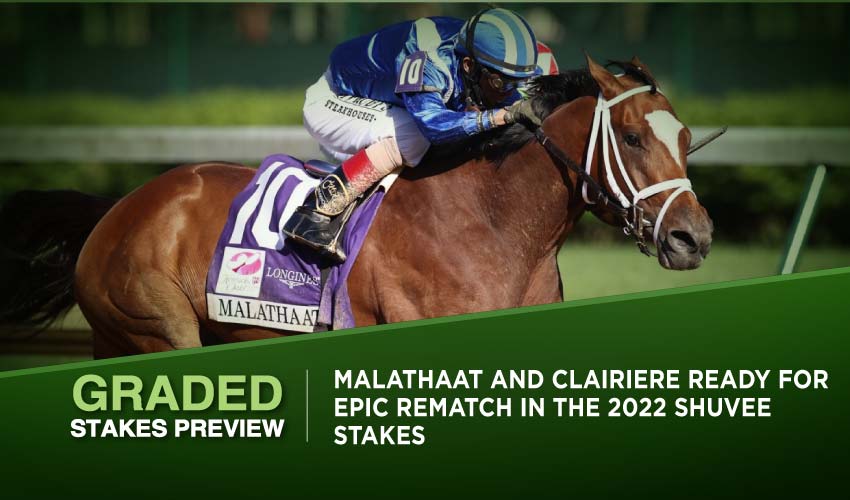 This Sunday at Saratoga we will see the 46th running of the G2 2022 Shuvee Stakes and with some top-quality horses in action, it’s set to be action-packed. Here we reveal everything you need to know ahead of the big race.

Only four horses head to post for this year’s race and despite there being a disappointing lack of numbers, the quality of the horses on display still makes this a fascinating encounter.

There is a sense that this year’s edition of the Shuvee could turn into a two-horse race between two excellent fillies, Clairiere and Malathaat. The two are set for a rematch following their battle in the Grade One Ogden Phipps Stakes back in June.

That day it was Clairiere who came out on top, but these two have plenty of previous and have beaten each other numerous times in the past. Despite being on the wrong side of the result last time out, it is Malathaat who is the slight favourite and is primed to win yet another graded contest.

The Todd Pletcher-trained horse has plenty of big race experience which includes a third-place finish in the Breeders’ Cup Distaff and a win in the Group One Alabama Stakes.

In the Ogden Phipps, the race was not run to suit Malathaat in any form. The duo of Letruska and Search Results burned up the field, leaving Clairiere and Malathaat long behind in their wake.

As the leading duo tired, it became a head-to-head contest between Clairiere and Malathaat with the former timing her head bob perfectly to emerge victorious.

In order to get her revenge, it’s expected that in the Shuvee Malathaat will try and dictate the pace and create a sizeable gap between her and the closing Clairiere. If she can set the fractions just right it could be a tricky day’s work for rival..

Joel Rosario has a tricky task on his hands trying to gauge the speed of Clairiere. A fan of coming off the pace, it’s crucial that he doesn’t get too far behind the likely pace setting of his rival Malathaat.

Her win in the Ogden Phipps was a race run perfectly to suit, and it’s highly unlikely that everything will fall into place as easily this time around.

If she is to beat Malathaat she will have to produce another lifetime best.

With the likelihood of Malathaat and Clairiere filling the top two places, Crazy Beautiful and Exotic West look set to battle it out for third place.

Crazy Beautiful is a former winner in Grade 3 company but is yet to produce anything on that level this season. Arguably the most exposed horse in the field she has a lot on her plate if she is to be victorious here.

The outsider of the field is Exotic West. Still reasonably unexposed, she has won one of her four career starts. A winner in Listed company, she backed that win up with a second-place showing in her only run in graded company.

With this likely to be a showdown between Malathaat and Clairiere we will pick Malathaat to just come out on top. Her defeat in the Ogden Phipps came in a race that wouldn’t have suited her running style. A return to more front-running tactics should cement her class in what could be a classic encounter.