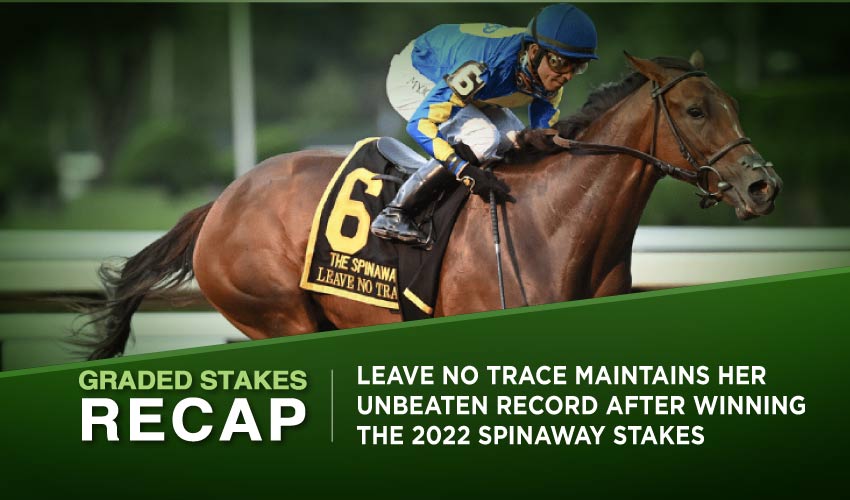 The curtain came down on Saratoga on Monday, with the impressive success of Forte in the G1 Hopeful a fitting climax to another spectacular meet. Emaraaty gave leading trainer Chad Brown a final-day winner in the G3 Bernard Baruch, while 24 hours earlier Leave No Trace had left a big impression when landing the 2022 Spinaway Stakes.

Forte is a big noise

Rain swept in on Monday to dampen the last hurrah of the glorious Saratoga meets, but it didn’t douse the fire of Forte, who splashed through the slop to secure G1 honours in the Hopeful.

The Violence colt announced himself as pro tem leader among juvenile colts with an authoritative display, the 6-1 fourth-choice sitting a way off the pace set by hot favourite Gulfport until cruising up to engage with that rival on the home turn.

Gulfport ran wide, Forte saved ground and went to the lead at the furlong pole before drawing off to win by three lengths, stopping the clock in 1:22 and one-half. Blazing Sevens came on late for third, nine lengths behind Gulfport.

The victory capped a spectacular meet for jockey Irad Ortiz, who led the standings for the fourth time with 55 wins, 15 of them in stakes. Trainer Todd Pletcher was runner-up in the trainers’ table and can look forward to bigger things with Forte, who is earmarked for the G1 Champagne over a mile at Aqueduct on October 1.

It’s never too late. At the age of seven, Emaraaty made his breakthrough at Graded level when going gate-to-wire in the Bernard Baruch, improving his record at Saratoga to four-for-five.

The 6-1 fourth-choice, who once cost $3.5m at the sales, led his rivals a merry dance under Flavien Prat, staying well out of reach before crossing the line three and a half lengths clear of City Man, six lengths clear of third-placed Winters Back. The time was 1:41 and two-fifths. It was the 42nd win of the Spa meet for trainer Chad Brown, leading trainer for the fifth time.

Two-year-old contests are prone to upsets and that was certainly the case in the Spinaway at Saratoga on Sunday, when 14-1 shot Leave No Trace maintained her unbeaten record with an accomplished performance.

The daughter of Outwork, ridden by Jose Lezcano, pressed the fractions set by Naughty Gal before challenging three wide on the turn, sustaining her effort to lead at the furlong pole and turn back the tepid threat of favourite Wonder Wheel, scoring by a length and a half. Kaling was third, beaten a further length and a quarter; the clock showed 1:24 and change.

“She was training great,” said trainer Phil Serpe, who was signing for his first G1 in 29 years. “And you have to make hay when the sun shines. You take a shot. That’s what racing is all about.”

Stay tuned for the latest Breeders’ Cup Odds, Entries, Results and don’t forget to Sign-up to get our daily horse racing news and become a winner!

Follow us on Social Media for more 2022 Spinaway Stakes updates!