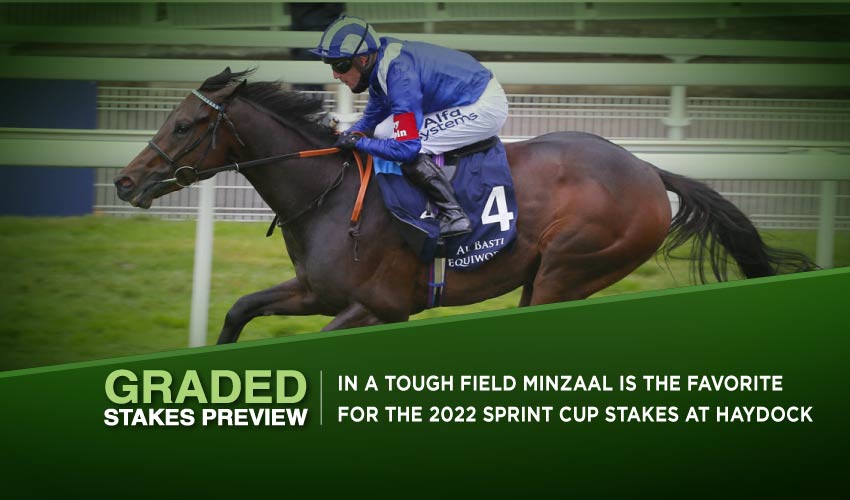 With the nights drawing in fast and the weather getting colder, the UK flat season is slowly drawing to a close with just a few big races left on the calendar.

This Saturday the best of the UK racing comes from Haydock Park with the Group 1 2022 Sprint Cup Stakes and Group 3 Superior Mile Stakes. Here is everything you need to know.

One of the hardest races to predict comes in the form of this 2022 Sprint Cup Stakes. A six furlong mad dash to the line, at the time of writing nineteen horses have been declared to run.

In a race of this nature many horses will have a credible chance. The predicted favourite for the race is the Owen Burrows trained Minzaal.

The money has come for Minzaal and his odds are shrinking all of the time. A progressive horse, Minzaal won the Group 3 Hackwood Stakes before following that up with a positive showing in the Group 1 Arc Prix Maurice de Gheest where he finished second.

With that form in the bank, he will be the horse to beat – but there is certainly value everywhere you look.

One horse that will be looking to notch another Group 1 victory is the Charlie Appleby trained Naval Crown. Naval Crown has had a busy season and has been successful in Group 2 and Group 1 races. A winner of this season’s Platinum Jubilee Stakes, he will be looking to bounce back from a disappointing fifth place finish in the Arc Prix Maurice de Gheest. He finished behind Minzaal that day and will be hoping he can reverse that form here.

Last year’s winner Emaraaty Ana is back again to try and regain her Sprint Cup crown. Since her win last year things have been tough for this speedster and she hasn’t shown a great deal in her races. Struggling for form she did show some promise last time out with a third place finish in the Nunthorpe. That was over five furlongs and now returned back to six, she could be a viable contender.

Kinross and Frankie Dettori seem to have struck up a great relationship and after just missing out  in the Group 2 Lennox Stakes, the pair atoned next time out with a success in the City of York Stakes. He was a comfortable winner that day and should be able to transition into Group 1 company with ease.

Go Bears Go is another who heads to Haydock off the back of an impressive win last time out. A winner of the Grade 3 Phoenix Sprint Stakes, Go Bears Go is a previous Group 2 winner and he has a live chance of bagging his first ever Group 1.

Brad the Brief for Hugo Palmer has just had two runs this season but both have been successful and have been at Grade 2 level. This will be his first ever crack at the highest level but he has the class to potentially have a major say in where this race ends up.

With a deep and loaded field this year’s Sprint Cup Stakes is a tough race to call. Despite Minzaal being a horse on the improve, we will take a chance on Naval Crown who at a bigger price could be a real contender to land yet another Group 1 contest.

The graded action at Haydock kicks off with the Superior Mile. A Group 3 contest, eleven horses have been declared for the race at the time of writing.

Expected to go off as the short priced favourite, Reach For The Moontrained by John and Thady Gosden is looking to win for the first time this season following two second place finishes. His second place in the Group 3 Hampton Court Stakes was a decent showing and the drop back to a mile could really be in his favour.

Aldaary will likely start as the second favourite and heads into this contest fresh off the back of three consecutive wins. The last of these wins came at this track and was achieved in Listed company. A comfortable winner that day, this is his first foray into this level of racing but he should have the quality to compete and will be a danger to all.

Another horse taking the step up to Group 3 company for the first time is the Charlie Hills trained Dark Shift. A winner of two of his four starts this season, he ran with credit in this year’s International Stakes where he finished third in a 24 runner field.

Dark Shift seems to run better in bigger fields so it will be interesting to see how he handles the relatively small field he will encounter here.

A really fascinating runner is Triple Time. A winner of his last two races, Triple Time hasn’t been seen on the track since September last year. It remains to be seen how fit Triple Time will be, but interestingly he has had four career starts with three of them coming at this course. He has two wins here and could be the unknown factor of the race.

Bayside Boy will be a popular option for many punters based off his previous form. A winner of the Group 2 Champion Stakes last year, things haven’t quite gone to plan since. Highly tried, four of his last five runs have come at the very highest level and this return to calmer waters should see him in a positive light.