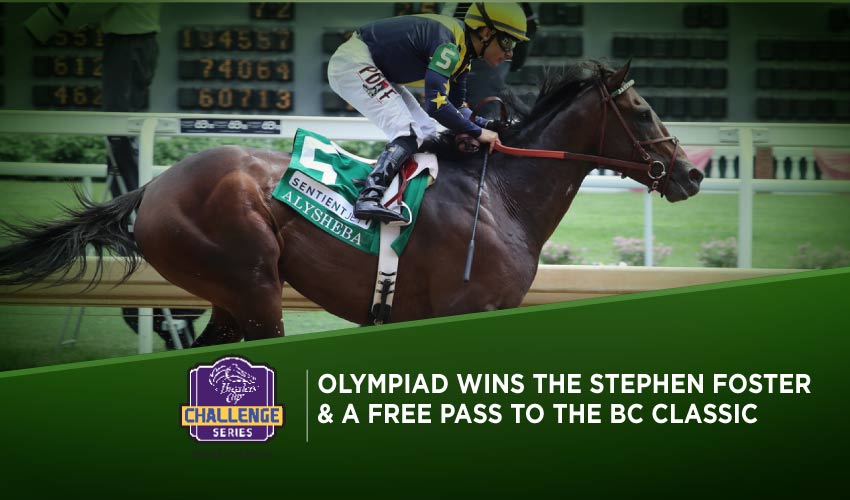 The Breeders’ Cup is four months away but it was on everyone’s mind at Churchill Downs on Saturday, when Olympiad stretched his hot streak to five and earned a free pass to the BC Classic with an authoritative success in the feature 2022 Stephen Foster Stakes. Another potential leading candidate for the world championships is the mare Shedaresthedevil, who returned to her brilliant best with victory in the G2 Fleur de Lis and now has the BC Distaff at the top of her agenda.

Victory in the 2022 Stephen Foster Stakes, the marquee event at Churchill Downs on Saturday, brings with it a paid berth into the Breeders’ Cup Classic, and Olympiad put down a persuasive marker for the end-of-year championship with a dominant display to take his winning streak to five.

The 3-2 favorite turned in his best performance to date, pressing the pace set by Caddo River until moving to the lead at the top of the stretch, quickening clear and maintaining his advantage all the way to the wire, a horse right at the top of his game. He came home two and a quarter lengths ahead of third-choice Americanrevolution, with two and three-quarter lengths back to the rallying Proxy in third.

Second-favourite Mandaloun, the official winner of last year’s Kentucky Derby, was a lacklustre fourth on his return to action; the clock stopped at 1:47 and three-fifths.

“He has such a big stride and really extends it late in races,” said jockey Junior Alvarado. “I think as he’s got older he’s got faster – I asked him just a little bit in the final furlong and he continued to get faster. He’s a great horse and it will be a fun rest of the year.”

It has already been a fun year around Olympiad, a son of Speightstown who has blossomed as a four-year-old, winning five straight since his last defeat in the G1 Cigar Mile in December at the hands of today’s victim Americanrevolution, who ran another solid race.

Those victories include the G2 New Orleans Classic at the Fair Grounds and the G2 Alysheba here under the twin spires in May, and Olympiad has now run himself into contention for top honors, with his next target the $1m G1 Whitney at Saratoga over a mile-eighth on August 6. The opposition at the Spa is likely to include the top-class Life Is Good, who returned to winning form with an easy score at Belmont Park on Saturday.

Trainer Bill Mott was not present but offered his thoughts by telephone, and he couldn’t have been blamed if those thoughts rekindled memories of his great horse Cigar, who built a fearsome winning streak of 16 and parlayed a perfect season into victory in the 1995 BC Classic. Olympiad is no Cigar, not yet, but he’s heading that way.

“It was really nice to see him win like that. I thought it was a very game win,” said Mott. “There were some nice horses in this field and I thought he did it rather easily.”

With his share of the 2022 Stephen Foster Stakes purse Olympiad became racing’s latest millionaire, in the process taking his lifetime record to an impressive seven-for-ten, with the Cigar Mile the only time he has missed the board. Life will get tougher for Olympiad now and he must prove he belongs at the top level, but he is already one of the stars of the season and is still firmly on an upward curve.

G2, $350,000, 1m 1f, 4yo+ fillies/mares
The form is temporary, class is permanent. The wisdom of that old saying was underlined yet again when Shedaresthedevil bounced back to winning form in the Fleur de Lis, the five-year-old snapping a three-race losing streak with impressive success.

Back at her beloved Churchill Downs, where she is now six-for-seven, the 7-5 joint-favorite allowed Super Quick to set the fractions before running her down at the furlong pole and driving on to win by a length and three-quarters, stopping the clock in 1:49 and one-fifth. The other joint-favorite Pauline’s Pearl was a never-nearer third, three and a half lengths further back.

“She’s back,” said jockey Florent Geroux. “We sat in a perfect position the entire way around the track, and inside the eighth pole she started to find her best stride and drew away late.”

Shedaresthedevil may be back but she never really went away, although by her own very high standards she hadn’t caught fire in 2022, adding two defeats to her loss in last year’s Breeders’ Cup Distaff to make the wiseguys think her best days were behind her. Yet she still has a monster 50 percent strike rate, ten-for-20 including G1 scores in the Kentucky Oaks, the La Troienne, and the Clement L Hirsch, and those who considered she might be beginning to lose her lustre were served up humble pie. Brad Cox was definitely not one of that number.

“I think a lot of nay-sayers were thinking she’d lost a step, but we certainly hadn’t seen that in her training,” he said. “It’s rare to have a G1-winning mare come back at the age of five because of her value as a broodmare, so I’m very happy she’s back in the winner’s circle. I’m very proud of her.”

There is a distinct connection between Shedaresthedevil and the champion Monomoy Girl, both Kentucky Oaks winners who reserved their best for Churchill Downs, both trained by Cox and ridden by Geroux. The big difference between the mares is that Monomoy Girl won the Breeders’ Cup Distaff twice, and although the Fleur de Lis is not a ‘win-and-in’ this year, Shedaresthedevil will get another chance to emulate her former barn mate at Keeneland this fall.

“The Breeders’ Cup is the main goal again,” added Cox. “We’ll get there, although I haven’t decided how she’ll do that yet. We’ll work backward from November 5.”

The possibilities include another stab at the Clement L Hirsch at Del Mar Racetrack on August 6, although Cox may keep his super mare closer to home and send her for her first start at Saratoga instead, where the nine-furlong G1 Personal Ensign on August 27 would be an obvious objective.