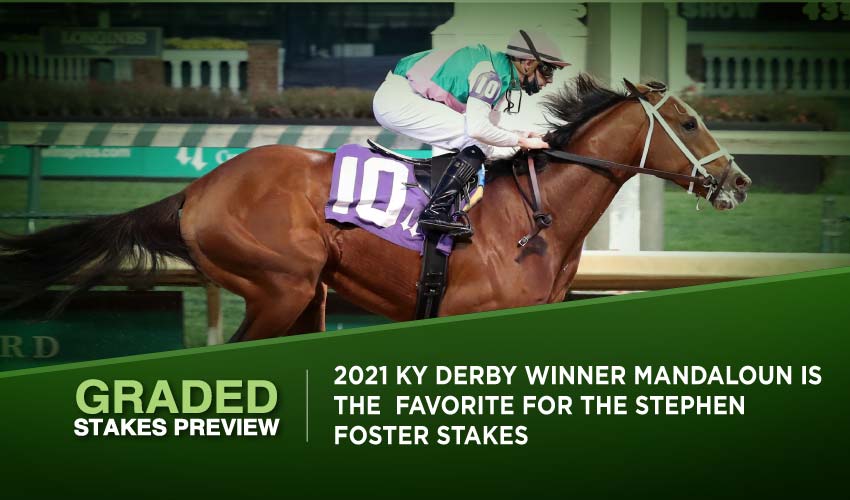 The rare sight of a Kentucky Derby winner returning to Churchill Downs is in store on Saturday, when Mandaloun – runner-up on Derby day, promoted on the disqualification of Medina Spirit – takes on strong opposition in the shape of G1 winner Americanrevolution and the fast-improving Olympiad in the feature G2 Stephen Foster Stakes.

The Stephen Foster, the highlight of Saturday’s card at Churchill Downs, commemorates the composer of the track’s anthem My Old Kentucky Home, and this year’s renewal – a win-and-in for the Breeders’ Cup Classic – is certainly something to make a song and dance about.

The headline act is last year’s official Kentucky Derby winner Mandaloun, who is on a retrieval mission after disappearing without trace in the G1 Saudi Cup in February, hamstrung by chasing the pace on a track that favored deep closers all night. He’s had four months to get over the race and the journey, and his defeat of the late, lamented Midnight Bourbon in the G3 Louisiana at the Fair Grounds on his first start of 2022 showed that the flame still burns.

However, there is stiff opposition in the shape of Americanrevolution and Olympiad, whose fortunes have diverged since they ran first and fourth, separated by four and a half lengths, in the G1 Cigar Mile at Aqueduct in December. That was a career peak for Americanrevolution and he wasn’t on that level on his sole start since, when fourth in a stakes over course and distance last month, two lengths behind runner-up Proxy.

He is likely to move up on that, but he’ll certainly need to if he is to keep up with the progressive Olympiad, who has gone from strength to strength since the Cigar Mile and is unbeaten in four during 2022.

Those victories included the mile-eighth G2 New Orleans Classic at the Fair Grounds, in which he beat Proxy by two lengths, and last time the G2 Alysheba here over a mile-sixteenth, when he drove clear in impressive fashion to score by two and a half lengths, with longshot Title Ready another length and a half back in third. Olympiad has to spot Mandaloun 3lb, but such is the rate of his improvement that he may well have more in reserve.

That was arguably a lifetime best for old-timer Title Ready, who is zero-for-six at Churchill Downs, while Proxy has never won away from the Fair Grounds.

Also surfing a wave of good recent form is Last Samurai, who makes his first start for Wayne Lukas today and his first since winning the mile-eighth G2 Oaklawn at the eponymous Arkansas circuit, when he beat subsequent G2 winner Fearless by a very impressive four lengths. That was a career-best and he rates a big danger if in that mood.

The field is completed by Caddo River, barnmate of Mandaloun, who is on a roll of three wins in allowance optional claimers, most recently here over a mile. He’s two-for-two at this track and merits this return to Graded company.

This is a deep contest, but OLYMPIAD has done nothing but improve since the turn of the year and can move up again to take his winning streak to five.

Follow us on Social Media for Stephen Foster Stakes updates!