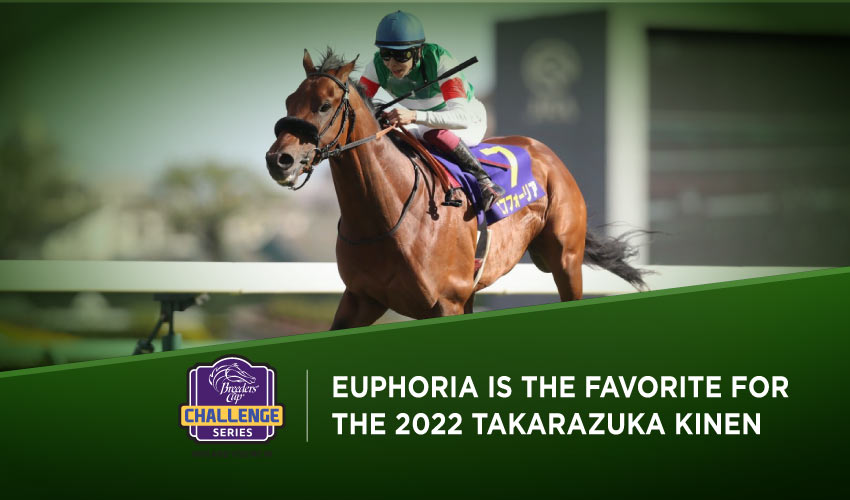 Hanshin hosts one of the pinnacles of the whole Japanese season the 2022 Takarazuka Kinen. Similarly, as in the Arima Kinen, the field is formed according to fans’ votes; in other words, people just choose the horses they want to see in this race, while the rest of the field is completed via earned money. Therefore, we’re about to see stars like Efforia, Daring Tact, and Titleholder here.

The prestigious G1 turf race is open to three-year-old and older horses and is held at the distance of a mile and three furlongs. Eighteen participants will vie for the purse of 385,400,000 Yen, while the leading chance seems to be Efforia.

The best three-year-old of 2021 is trained by Yuichi Shikato and scored six wins out of eight outings, including three G1 victories. After bagging the last year’s 2000 Guineas, he finished second in the Japanese Derby and bettered older horses both in the Tenno Sho and Arima Kinen, where he denied the claims that his future doesn’t lay at the long distances.

Still, his seasonal debut was hugely disappointing. In April, Efforia headlined the G1 Osaha Hai over a mile and a quarter where he had no spark and ran in ninth. Of course, even the greatest champs have their weaker moments; however, if the team around Efforia wants to return to the winning ways, the son of Epiphaneia needs to leave that lacklustre performance behind and show up in such form he sported as a three-year-old.

Another participant whose seasonal reappearance didn’t go well is Daring Tact. The five-year-old mare was a true star of 2020 when the Haruki Sugiyama bound bay achieved the Triple Crown for fillies as she scored the 1000 Guineas, the Japanese Oaks, and also the Shuha Sho, upon which she ran in third in the Japan Cup.

During the past season, she showed up just twice to place on the G2 and G1 stage, but as she returned to the tracks in May 2022, she managed only sixth place in the G1 Victoria Mile among fillies and mares. Sunday’s race will be even fiercer, so like Efforia, Daring Tact needs to return to her best to play a role here.

The field then comprises some horses who have enjoyed several successes in the ongoing season. For example, Titleholder scored the last year’s Japanese St Leger and even though he finished only fifth in the Arima Kinen, he added two Graded triumphs to his record in 2022. After bagging a G2 race, he was superb in the G1 Tenno Sho over two miles, where he prevailed thanks to his bold front-running tactic over Deep Bond.

These contestants are very classy; they might prefer a longer distance, though. The last to mention is five-year-old Panthalassa, who crept into the Graded contention only this season as in 2021 when he succeeded at the G3 stage, while in February, he recorded his premiere G2 win. Subsequently, he won the G1 Dubai Turf. He delivered a brilliant run over a mile and a furlong back then, winning the race in a dead-heat with British raider Lord North.

is Efforia, who just deserves to be trusted despite his most recent performance. If he fails this time as well, Panthalassa might enjoy another moment in the spotlight.

Follow us on Social Media for 2022 Takarazuka Kinen updates!