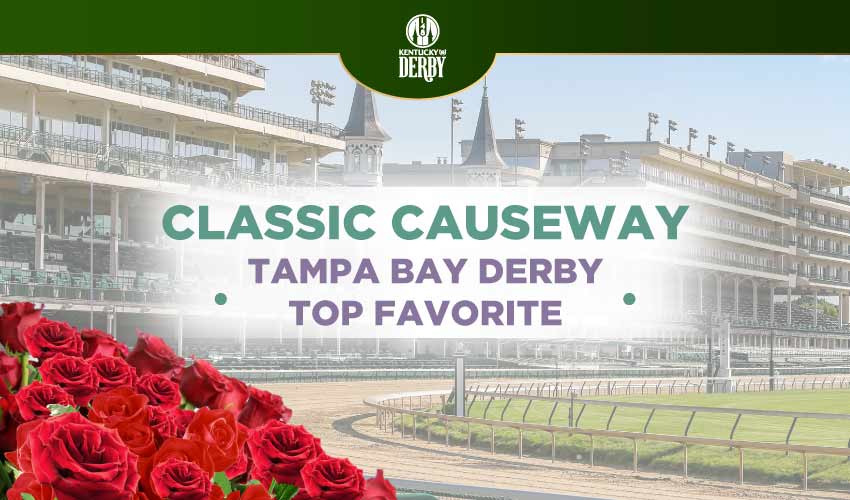 The biggest day of the year at Tampa Bay Downs has the local G2 2022 Tampa Bay Derby as its centerpiece, with leading Kentucky Derby contender Classic Causeway heading a big field that includes Shipsational and Major General. The supporting card is strong, with Chad Brown well represented in the G2 Hillsborough and G3 Florida Oaks, and there’s an intriguing bunch with plenty to prove in the G3 Challenger.

There are 50 more ‘Road to the Kentucky Derby’ points available to the winner of the Tampa Bay Derby, the highlight of Saturday’s standout card at Tampa Bay Downs, and with them goes a place in the gate at Churchill Downs.

The forecast for the west Florida track is 100 per cent rain, however, which may very well lead to a sloppy track and the possibility of a shock result, for the strong favourite Classic Causeway has no experience in the slop.

Classic Causeway attained his lofty position in today’s mutuel betting and in the Kentucky Derby future book with an impressive success in the G3 Sam F Davis over course and distance a month ago, when he was out of the gate quickly and always on or near the pace before drawing off to win by three and three-quarter lengths in a fast time. From post four, if he can start as brightly as before, he has every chance of repeating the dose.

Sam F Davis runner-up Shipsational , on the other hand, blew his chance with a tardy start but then came running hard through the stretch, passing five horses but never able to get to grips with the winner. With an even break it might have been a different story; he has a 4lb pull at the weights with Classic Causeway now and won on a sloppy track at Belmont Park in October when making all in stakes company.

Both these horses should again have the measure of the reopposing Strike Hard nearest at the finish in fourth, the never-dangerous fifth Golden Glider and Trademark, who dropped right out to be last of 12.

At this time of year, as horses mature into their full strength, three-year-old form is far more relevant than last year’s two-year-old form, so Major General has plenty to prove despite bringing an unbeaten record and victory in the G2 Iroquois at Churchill Downs in September (Strike Hard back in seventh). The form of that race has taken a few knocks in any case, and Major General is unlikely to be razor-sharp off a six-month layoff.

Another with something to prove is Giant Game, who was third in last year’s Breeders’ Cup Juvenile – an unreliable guide – and then ran a shocker in the G3 Holy Bull at Gulfstream Park last month when a limp eighth behind White Abarrio, two places behind the never-in-it longshot Spin Wheel.

Since then Giant Game has undergone a minor breathing operation – you can’t run if you can’t breathe, so a little forgiveness is in order – and may well leave that performance far behind. A fully-functioning Giant Game could make his morning-line price seem very generous.

Stakes debutant Money Supply showed promise when winning his maiden on debut here last month in a decent time, but he’s hard to assess given that score came at six furlongs, while Happy Boy Rocket also comes off a maiden win, this one at Gulfstream Park over a mile-sixteenth, and the usual improvement may put either or both in the mix, certainly for those playing exotics.

Giant Game may outrun his odds, but SHIPSATIONAL was a little unlucky in the Sam F Davis here and is a solid choice to flip that form with warm favourite Classic Causeway.

The Graded-stakes action begins with the Hillsborough, and no older-horse turf contest is complete without a contribution from Chad Brown, who puts two in the gate including morning-line choice Bleecker Street.

The Quality Road filly has a healthy four-for-four record and made her stakes breakthrough last time when surging between horses in the G3 Endeavour here over a mile-sixteenth, running down Lady Speightspeare to win going away by a length and a half, an impressive performance from a horse firmly on the upgrade.

The runner-up was unbeaten in four starts at Woodbine in 2020-21, including the G1 Natalma, but Canadian form doesn’t always translate to the lower 48 and she is zero-for-two in the US, although both times on the board. Fourth-placed Jezebel’s Kitten comes here after losing 12 straight since October 2019, while sixth home Nantucket Red has been in good order of late, winning on turf and dirt, but there’s no obvious reason why she should leave that Endeavour form behind.

Brown’s other contender is Rocky Sky, an Irish import who was the longshot winner of a ten-furlong stakes at Navan in April and then last of eight in the G3 Saratoga Oaks on her debut Stateside. She will do better and gets first-time Lasix, but it’s hard to make a convincing case for her.

Runaway Rumour has been beaten five times, all in stakes, since winning at Belmont Park in June, but only went under by a neck in the G2 Sands Point at the same track in October and isn’t out of it.

Top Pick for the Hillsborough Stakes:

BLEECKER STREET is on the up-and-up, stretching her unbeaten record to four in a G3 against several of today’s rivals here last time out, and can continue her upward trend.

Chad Brown is again doubly represented in the Florida Oaks, and the slight choice at the odds is Spicer, whose victory in an Aqueduct maiden at this distance in November was both authoritative and relevant going forward, for five lengths back in third was Ambitieuse and further behind in seventh was On Alert , who were both making their debut that day. Both Spicer and Ambitieuse get first-time Lasix today.

Since then On Alert has won a Gulfstream Park maiden and Ambitieuse has done that and more, moving up in grade when runner-up in the G3 Sweetest Chant, also at Gulfstream, over a mile-sixteenth, with Roughly A Diamond a way back in seventh after losing her chance at the gate when stumbling badly.

It was obviously a hot maiden, and if Spicer can match the improvement shown by Ambitieuse then she has a strong chance despite lacking a recent run. She is a well-known quantity compared to barnmate Dolce Zel , who has her first start Stateside since leaving France, where she was last seen winning a conditions race at Longchamp over six and a half furlongs in October. It’s impossible to relate this race to that form, although the forecast rain will be in her favour.

Alittleloveandluck was beaten six lengths when runner-up in a stakes here on the main track – Princess Elin fifth, more than five lengths adrift – but the winner Nest is highly regarded, and Alittleloveandluck is a previous stakes winner over a mile on turf. She is preferred to Mrs Barbara, narrow winner of the G3 Mazarine on the synthetic surface at Woodbine last November.

Top Choice for the Florida Oaks:

She was beaten six lengths on her last start, but her conqueror is a class act and ALITTLELOVEANDLUCK, already a stakes winner on turf, can land her first Graded race.

At a time when we’re all looking forward to the Kentucky Derby, the Challenger tempts us to look back to last year’s contest, when today’s contenders Hidden Stash and Dynamic One both took their chance behind poor Medina Spirit, finishing 14th and 18th respectively.

In two starts this year Hidden Stash has been beaten in allowance optional claimers here on turf, while Dynamic One hasn’t been seen since dropping away to be last behind Essential Quality in the G1 Travers at Saratoga in August. Todd Pletcher is a master at producing horses off a long layoff, but Dynamic One is a very short price nevertheless.

Shug McGaughey has two chances here, with first-string Greatest Honour coming off an even longer layoff than Dynamic One, having not been out since running third in the G1 Florida Derby at Gulfstream Park very nearly a year ago.

He gets first-time Lasix but there’s no knowing how much ability he’ll retain – he won last year’s G2 Fountain of Youth and G3 Holy Bull – after such an absence, but lightly raced barnmate Scalding is certainly hot at the moment after storming away with an allowance optional claimer over course and distance last month.

Godolphin’s Cody’s Wish is on a four-timer after three minor wins over a mile at Churchill Downs and merits the move up, while Shirl’s Speight is also on a roll, with two recent wins over course and distance including the G3 Tampa Bay, although those were on turf and he makes his main track debut now.

All the runners come with a query over their prospects. A chance is taken that CODY’S WISH can maintain his progress and stretch his winning streak to four on this Graded debut.