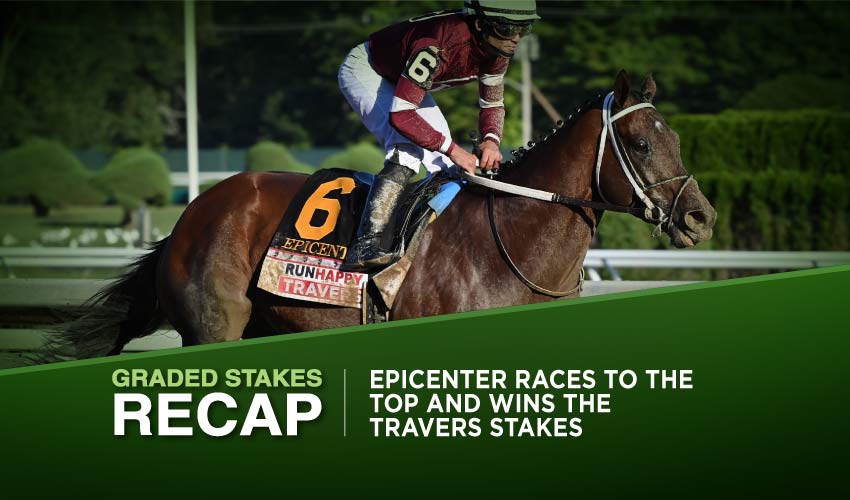 The star of a spectacular show at Saratoga on Saturday was undoubtedly the top-class Epicenter, who laid down a convincing marker for championship honors with a dominant victory in the centerpiece 2022 Travers S. There were dazzling performances throughout the afternoon, notably from Malathaat in the G1 Personal Ensign and Jack Christopher in the G1 H Allen Jerkens Memorial, while there was also a stunning upset when Cody’s Wish ran down the 1-9 favorite Jackie’s Warrior to claim the G1 Forego.

The three-year-old colts needed a leader and they found one at Saratoga on Saturday when Epicenter powered to a stunning victory in the $1.25m Travers – the most prestigious race of the meet – and left no one in any doubt that here was a champion.

This was Epicenter’s first G1 success, and about time too after second-placings in the Kentucky Derby and Preakness, but it was worth the long wait. The even-money favorite took command at the top of the stretch, after sitting behind fractions surprisingly set by second-choice Cyberknife, and surged thrillingly away from his rivals, drawing off under Joel Rosario to beat the plucky Cyberknife by five and a quarter lengths eased-down, in a time of 2:00 and three-fifths.

Zandon rallied from the rear without ever posing a threat to be third, a nose behind the runner-up but a neck in front of Rich Strike, the Kentucky Derby winner who did much to remove the feeling of fluke about that Churchill Downs upset. The big disappointment was Preakness winner Early Voting, who stopped to nothing in the stretch and walked across the line.

“He’s exciting, isn’t he? That answered a lot of questions,” said trainer Steve Asmussen, who has saddled more winners in the US than anyone else but was only now claiming his first Travers.
“It’s everything you hope for. You start with a talented horse who continues to get better. What can be better in racing than that?”

It will now take something unforeseen to knock Epicenter out of contention for championship honors, given that he has beaten every other claimant to the crown. His performance in the Travers proved his brilliance and the statistics underline it – six-for-ten lifetime and only off the board on debut, earnings of almost $3m, G2 scores in the Risen Star, Louisiana Derby, Jim Dandy, and now this precious stallion-making G1 victory in one of the biggest races in the calendar.

Now all roads lead to the $6m G1 Breeders’ Cup Classic at Keeneland on November 5, and a potential clash with older superstars Flightline and Life Is Good. Asmussen indicated that Epicenter would likely not run again before then, but after waiting so long for that elusive G1 success, another couple of months won’t seem that long at all.

Form is temporary, class is permanent. Malathaat showed the veracity of that ancient wisdom when bouncing back from two defeats to win the Personal Ensign, the fourth G1 victory of her career but the first for 12 months.

It seemed as though her career was plateauing but the 3-1 fourth-choice returned to her peak, pressing the steady pace set by fan-favorite Letruska before finding an extra gear under John Velazquez through mid-stretch, running down Search Results in the final sixteenth to get the job done by a half-length, stopping the clock in 1:48 and one-fifth, the result mirroring the outcome of last year’s Kentucky Oaks, in which Malathaat beat Search Results by a neck.

The gallant Letruska kept rolling for third, two lengths further back, but warm favorite Clairiere ran a dreadful race after becoming fractious in the gate, trailing the field throughout.

“We love this filly so much in the barn, and this was all about seeing her perform to her capabilities,” said trainer Todd Pletcher, winning the Personal Ensign for the third time. “We always feel that when she shows up on her ‘A’ game she is the top four-year-old filly in the country. She showed that today.”

The daughter of Curlin has never been off the board in her life, going eight-for-12 with victories in the G1 Ashland and G1 Alabama – alongside her Oaks success – garnishing her glittering resume. Malathaat now has more than $2.3m in the bank and is on her way to the Breeders’ Cup Distaff, in which she finished third last year.

Sprinters do not always get the credit they deserve, but Jack Christopher could be in the championship conversation alongside Epicenter after regaining the winning thread with a career-best in the H Allen Jerkens Memorial.

Jack Christopher lost his unbeaten record when moved up to a mile-eighth in the Haskell, but showed that his brilliance was still intact on this return to sprinting. The 1-2 favorite stalked Conagher to past halfway before taking over at the top of the stretch, and was never under pressure all the way to the wire, although the tough third-choice Gunite rallied bravely to keep the margin to a length and a quarter. The stopwatch showed a sparky 1:21 and one-fifth.

The longshot Runninsonofagun was two and three-quarters away in third, while second-choice Accretive, barn mate of the winner, lacked rally when the heat was turned up and came home in fifth place.

“He ran huge off just four weeks’ rest,” said jockey Jose Ortiz. “He gave me everything he had, and the race felt better than how it looked on paper. He beat good horses today.”

The victory made Jack Christopher a millionaire and was the third G1 of his six-race career following the Champagne and the Woody Stephens at Belmont Park. Chad Brown now has a decision to make regarding his speedball’s Breeders’ Cup target, with the six-furlong Sprint and the Dirt Mile both under consideration – Jack Christopher’s victory in the G2 Pat Day Mile at Churchill Downs in May may sway connections in that direction.

Graveyard of champions. Saratoga lived up to its old name in the Forego with one of the biggest shocks at the track for years, as the outstanding Jackie’s Warrior was beaten at odds of 1-9 on his farewell appearance at the Spa.

The champ was softened up in a speed duel with Pipeline, and although he shook off that rival he had no answer to the powerful rally of Cody’s Wish, who came from a long way back under Junior Alvarado to nail the floundering favorite in the closing stages and win by a length and a quarter, stopping the clock in a sizzling 1:20.95, just half a second outside the 44-year-old track record. Pipeline plugged on for third, two, and a quarter lengths back.

“I was glad to see someone go with Jackie’s Warrior,” said trainer Bill Mott. “I really thought the style of this race would suit him. When he starts moving, he keeps moving. He needed to get some experience and now he’s turned into a racehorse.”

This was the G1 breakthrough for Cody’s Wish, whose previous best performance had brought victory in the G3 Westchester at Belmont Park in May. He will now be pointed towards the Breeders’ Cup Dirt Mile, while the bloodied but unbowed Jackie’s Warrior will make the final start of his career in the Breeders’ Cup Sprint.

“There’s a little sadness that it’s his last time at Saratoga because he’s brought us so much joy here,” said trainer Steve Asmussen of the colt who has a unique place in Saratoga history, with G1 wins in three successive years.

The Ballston Spa was the only G2 on a blockbuster G1-heavy card, and Chad Brown claimed the prize for a record seventh time when Technical Analysis led throughout to post her third win at Saratoga from four starts.

The 1-5 favorite was allowed her own way on the lead and quickened clear in mid-stretch, opening up an advantage that she held with relative ease all the way to the wire despite the late rally of bar mate Fluffy Socks, who got within a half-length as the camera clicked. The third horse, High Opinion, was seven lengths back; the time was 1:42 and four-fifths.

“I knew she was the lone speed, so I got a good jump out of the gate,” said jockey Jose Ortiz. “She was very nervous before the race so I tried to keep her quiet in the post parade, and she broke well and handled the soft going nicely.”

Technical Analysis was adding the Ballston Spa to last year’s Saratoga scores in the G2 Lake Placid and G3 Lake George, and may now be aimed at the G1 First Lady at Keeneland over a mile on October 8. A place at the Breeders’ Cup in either the Mile or the Breeders’ Cup Filly & Mare Turf is uncertain at this stage, given Brown’s wealth of possibilities in the distaff division.

Follow us on Social Media for more 2022 Travers S & updates!