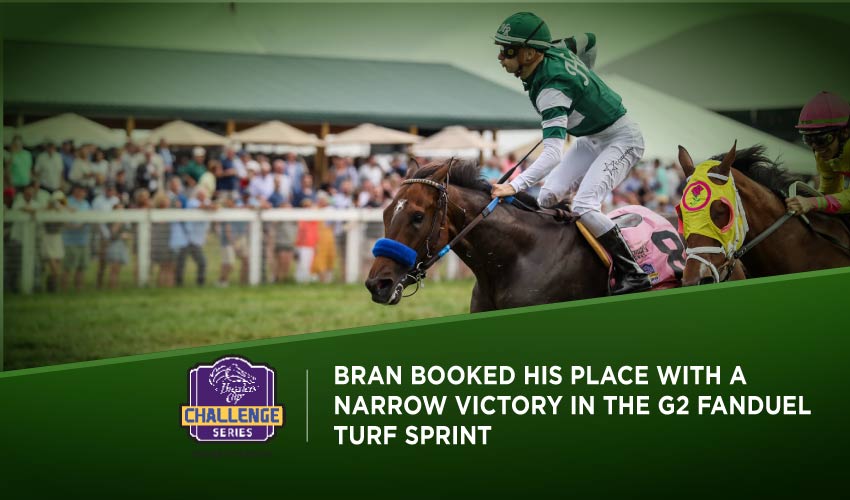 Two golden tickets to the Breeders’ Cup were on offer at Kentucky Downs on Saturday and both winners will take their chance at Keeneland in November. Bran booked his place with a narrow victory in the G2 Turf Sprint Stakes, while it was even closer in the G2 Kentucky Turf Cup as Red Knight prevailed by a nose.

Bran bowls them over

John Sadler has more in the barn beside the outstanding Flightline and proved it when Bran rallied late to win the FanDuel Turf Sprint, earning himself a paid berth into the Breeders’ Cup Turf Sprint at Keeneland on November 5.

Between them the ex-French four-year-old and expatriate French jockey Vincent Cheminaud brought a Gallic flavor to the long European-esque stretch at Kentucky Downs, needing just about all the lane to run down long-time leader Artemus Citylimits – who had drawn in off the also-eligible list – and win by a neck in a new track-record time of 1:07.41. The hot favorite Arrest Me Red was a length back in third.

“I think people underestimated him,” said Sadler, pointing to the 11-1 odds at which his gelding paid off. “He’s run down the hill at Santa Anita and he’s had a lot of experience in France, where the tracks are all different, so I thought he had a good vibe coming here.”

Bran took time to hit his straps after moving Stateside late last year, but is now three-for-eight over here and only once off the board. He may now train up to the BC Turf Sprint, in which he will renew rivalry with Arrest Me Red and may also meet that horse’s barn mate Campanelle, winner of the Mint Ladies Sprint here on Saturday afternoon.

Age is just a number, they say, and the eight-year-old Red Knight showed all the vitality of a horse half his age when coming out on top in a frantic finish to the Kentucky Turf Cup.

The old-timer was runner-up in this race two years ago but made no mistake this time, the 12-1 chance moving to the lead under Gerardo Corrales in mid-stretch and showing immense determination to hold on to his advantage, despite the late rally of both the favorite Gufo and Another Mystery. It was anyone’s race with 50 yards to run but Red Knight kept his head ahead to win by a nose from Gufo, with Another Mystery third by a neck. The time was a tick under 2:27.

“That was tremendous,” said trainer Mike Maker, winning this race for a record fifth time. “I thought he was going to get beat but he’s a real fighter, a very tough horse.”

Red Knight, whose share of the purse made him a millionaire, earned a free pass to the Breeders’ Cup Turf with this victory, and Maker is likely to train him up to the biggest test of his career at Keeneland on November 5, where Gufo will again be in opposition.