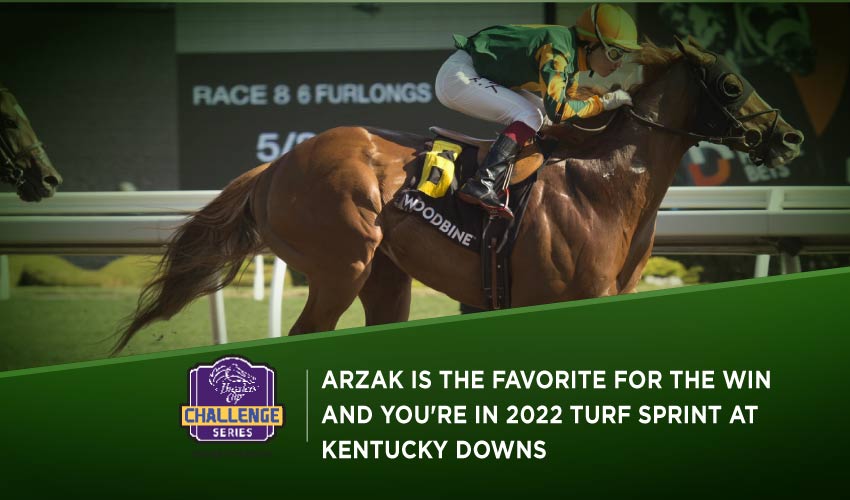 There’s big money to be won at Kentucky Downs on Saturday with two $1m contests taking centre stage. G1-placed speedster Arrest Me Red headlines a big field for the G2 FanDuel 2022 Turf Sprint, while track specialist Arklow runs for the fifth time in the G2 Kentucky Turf Cup, his record in the race an amazing 1212

Big fields chasing big purses is the keynote of Kentucky Downs, an unorthodox circuit where form from other tracks doesn’t necessarily play out in the expected fashion. That said, Wesley Ward is often the best place to start in speed contests and he supplies the morning-line favourite for the 2022 Turf Sprint on Saturday, a win-and-in for the Breeders’ Cup Turf Sprint at Keeneland on November 5.

The horse in question is the accomplished Arrest Me Red (9-5), still relatively lightly raced and in fine form this year, running arguably a lifetime best last time in the G1 Jaipur at Belmont Park when he led inside the last sixteenth but was nailed late and beaten a half-length, with Gregorian Chant (10-1) beaten six lengths into seventh spot and Chasing Artie (15-1) stone last of 13.

That followed the biggest victory of his career in the G2 Twin Spires Turf Sprint at Churchill Downs, when he was in front at halfway and kept on strongly to beat longshot Bran (6-1) by a length and three-quarters, with Gregorian Chant a nose away third, Chasing Artie eighth and Johnny Unleashed (30-1) ninth.

Since then, Bran has won a weak renewal of the G3 Daytona at Santa Anita and run third in a Del Mar stakes over a mile in which Gregorian Chant was runner-up, a head separating them. This pair are decent benchmarks and offer further encouragement to Arrest Me Red fans, although his outside post is not ideal.

Back in 2019, Totally Boss (12-1) was an impressive winner of this race, but he has run just seven times since and was only fourth in a little stakes at Ellis Park last time, in which runner-up Charcoal (20-1) was three-quarters of a length his superior. That form doesn’t look good enough here, and neither does that of Necker Island (15-1), winner of a six-furlong stakes on the main track at Colonial Downs last month before having his number taken down for interference.

Woodbine G3 winner Arzak (9-2) was only a length behind the mighty Golden Pal when fourth in the G3 Troy at Saratoga last month, but the winner wasn’t at his peak there and the form could be misleading; certainly Arzak’s achievements north of the border leave him with ground to make up at this level.

Chewing Gum (5-1) was eighth in this race 12 months ago – a place behind fellow longshot Front Run The Fed (15-1), who had been runner-up in 2020 –  and although his supporters can point to victory in the G2 Joe Hernandez at Santa Anita in January, with Bran third, he was some way below that level at Woodbine last time out and has won only once in his last 14 starts.

This represents class relief for ARREST ME RED after a strong effort at G1 level last time and is a good opportunity despite his outside post.

The importance of course specialists around this idiosyncratic track is illustrated perfectly in the Kentucky Turf Cup, a race the perky veteran Arklow (7-2) has made his own in recent years and a win-and-in for the Breeders’ Cup Turf.

This is the eight-year-old’s fifth appearance in the race and his record reads 1212, so there’s something about the place that really puts a spring in his step. In 2020 Arklow turned back the challenge of Red Knight (15-1) to win by a length and a quarter, while 12 months ago he was beaten a neck after being in close quarters, rallying gamely all the way to the wire when in daylight but just denied. He had a length and a quarter to spare over Glynn County (30-1) in third, with Breakpoint (15-1) a distant seventh.

On his only start of 2022, off nearly a ten-month layoff, Arklow showed that he retained all his ability when runner-up in the G2 Bowling Green at Saratoga, so he returns to his old Kentucky home ready to do himself justice.

That’s just as well, because he faces a top-class rival in Gufo (7-5), who would be an automatic choice for this were it not for the twin concerns that he comes here off just a two-week turnaround, and has no experience of this specialists’ circuit.

A fortnight ago Gufo came late and fast to win the G1 Sword Dancer at Saratoga, the third G1 score of his career, and that form is much better than any of his rivals can claim. Whether he can reproduce it so soon after his Spa exertions will be the key to the outcome of this race.

Mike Maker sends four to the gate with Temple (6-1), winner of the G2 Mac Diarmida at Gulfstream Park in May, the shortest-priced of the quartet. He improved on that Florida success when third in the G1 United Nations at Monmouth Park last time, finishing ahead of Gufo and Glynn County, and if he adapts to the track will pose a major threat.

His barnmates, in order of potential, are the aforementioned Red Knight – winner of a stakes at Colonial Downs in July on his first start for 11 months, beating Another Mystery (15-1) by a length and a half – and Glynn County, as well as stakes debutant Keystone Field (30-1).

Where there’s a turf route race there’s always a Chad Brown runner, and his representative is Highest Honors (12-1), third behind Channel Maker in a quality stakes at Belmont Park in July when Admission Office (10-1) – who will appreciate the step back up in distance after a limp showing in the mile-eighth G1 Arlington Million latest – was last of five.

Gufo is the standout but a two-week turnaround is off-putting, so ARKLOW, who never runs a bad race here, can take this prize for the third time.