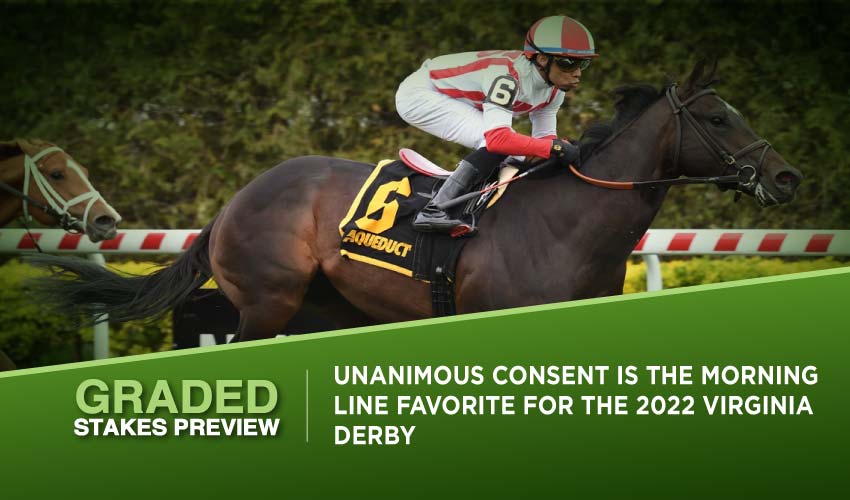 It’s the biggest day of the year at Colonial Downs, with Tuesday’s action headed by the G3 2022 Virginia Derby, which brings together a competitive field headed by former British-trained G2 winner Royal Patronage and backed up by promising contenders Limited Liability and Unanimous Consent.

There are Derbys everywhere and little Colonial Downs has its own version on Tuesday, the biggest race of the year at the east-coast circuit and a contest that features a castoff from the oldest, most famous Derby of them all.

Back in June, Royal Patronage (5-1) finished a washed-out 16th in the G1 Derby at Epsom, the mile and a half a step – or two – too far. Since then he has raced exclusively in the US, narrowly missing the board in the G1 Belmont Derby – with Limited Liability (9-2) two places and two and a half lengths behind – and the G1 Saratoga Derby, and given the quality of those two races this represents considerable class relief. First-time Lasix may also move him up.

Limited Liability has yet to win a stakes and came along late in a moderate edition of the G2 Pennine Ridge at Belmont Park in June, taking the ‘show’ spot from stakes-winner Unanimous Consent (3-1) by a length. The form reads well in the context of this race and both horses have a big shot for their big-league connections.

This is the first time away from Gulfstream Park for the in-form Grand David (6-1), who rides a three-race winning streak capped by a mile-sixteenth stakes in July on a synthetic surface, in which he was always near the pace before driving clear to beat the late-closing pair California Frolic (8-1) and Marwad (15-1) by two and a quarter lengths and three-quarters.

Grand David has yet to win on turf and Marwad – who gets first-time Lasix – has never tried it, so the usual surface caveats are in place, but all three are firmly on the upgrade. This is also a switch for Vance Scholars (10-1), who gets on the lawn for the first time after going gate-to-wire to win a stakes at Laurel Park last month.

The form Wow Whata Summer (20-1) showed when beating Annapolis in the G2 Penn Mile would put him right in the mix, but he’s blown out twice since then and his inconsistency is a concern, while the maiden winners Capensis (8-1) and Catnip (15-1) have it tough with this abrupt rise in grade.

Europeans on turf is a decent system, and ROYAL PATRONAGE has a good opportunity with class relief and first-time Lasix in his favor.

Chad Brown is fresh from another championship at Saratoga and now sets his sights on some relatively low-hanging fruit in the big-field Virginia Oaks, sending Oakhurst (3-1) to the gate with a wide draw to overcome.

She may have been last of five in the G3 Saratoga Oaks on her Graded-stakes debut, but was beaten only three and three-quarter lengths and she’ll find this level much easier to handle.

In a very open contest, her main market rival is Catiche (5-1), whose second place in the G3 Selene at Woodbine in July wouldn’t normally cut it below the border, but in this company it gives her a major chance. This is her first time on the weeds, though.

The ex-Irish Spirit And Glory (8-1) was beaten only four and a half lengths shen seventh in a quality renewal of the G3 Lake George at Saratoga and – similarly to Oakhurst – will find this more to her liking.

Delaware Park stakes winner Sparkle Blue (8-1) was coming off a seven-month layoff and should be even sharper now, and with Lasix first time rates the best of Graham Motion’s three-ply entry completed by stakes-placed pair Pharoah’s Song (15-1) and Candy Light (20-1).

It took a long time but Full Count Felicia (12-1) lost her maiden tag at the eighth attempt when romping here over a mile last month, drawing off to win by six and a half lengths. A little more improvement would put her in the mix, while Omixochitl (12-1) took a stakes on the synthetic surface at Gulfstream Park last time – Therearenorules (20-1) beaten four and a quarter lengths into third – and has winning form on turf.

The booking of Irad Ortiz may be significant for the chances of SPIRIT AND GLORY, who wasn’t beaten far in a strong G3 last time.

The Kitten’s Joy spotlights the importance of big-track form over second- or even third-tier form, with the morning-line leader Rarefied Flair (8-5) a good case in point.

Rarefied Flair got the job done at the third attempt when holding on gamely to win by a head over a mile-sixteenth at Saratoga just over two weeks ago, and although it wasn’t anything very special it takes a lot more to win a maiden at Saratoga than it does at, say, Ellis Park or Horseshoe Indianapolis.

He gets Lasix for the first time now and it’s a swift turnaround, but the form is certainly a level – maybe two – above that achieved by Gigante (5-2) when breaking his maiden by three lengths here over a mile on the main track, after being well beaten on turf on his debut.

Free Soul (5-1) also lost his maiden tag here  – at the fifth attempt – when driving clear to win by two and a half lengths over a mile, while My Mamba (15-1) got his at Laurel Park over five furlongs on the main track and now tries the lawn for the first time, as well as stretching out a long way.

Spurs Up (15-1) won a maiden claimer at Churchill Downs, which would normally make him of major interest, but next time out he was beaten out of sight in a sprint allowance here on the main track, which makes him very hard to like now.

This is a poor contest and the Saratoga form of RAREFIED FLAIR – at this distance, on turf – makes him impossible to oppose.

It’s the biggest day of the year at Colonial Downs, with Tuesday’s action headed by the G3 Virginia Derby, which brings together a competitive field headed by former British-trained G2 winner Royal Patronage and backed up by promising contenders Limited Liability and Unanimous Consent.

Follow us on Social Media for more 2022 Virginia Derby updates!