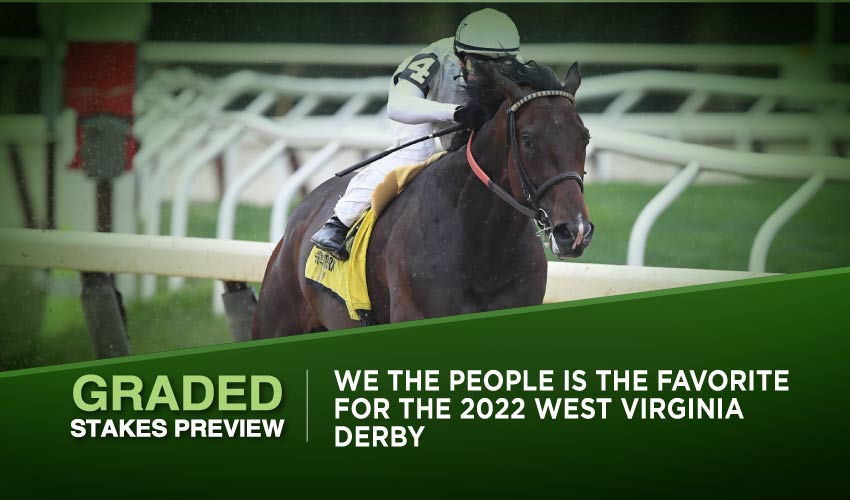 On Saturday, the Mountaineer Casino Racetrack & Resort offers an exciting card with the G3 races, as especially the 2022 West Virginia Derby attracted an alluring field of three-year-olds. The favorite is We The People, an impressive winner of the Peter Pan Stakes, while the Kentucky Derby fourth Simplification looks like his most serious threat.

This very race’s history is interesting and a bit amusing thanks to the fact that the three last editions were won by runners whose names started with Mr – Mr. Freeze, Mr. Money, and Mr. Wireless. The sort of tradition will be broken on Saturday, though. Three-year-old and older horses will then clash in the G3 West Virginia Governor’s Stakes. The field is quite competitive here but preferred Fulsome could draw on his results at the Graded scene and prevail once more.

The G3 dirt race is open to three-year-old and older horses who will cover the distance of a mile and half a furlong. The purse of $200,000 lured in a field of ten contestants, including Silver Prospector (4-1). The five-year-old horse bagged his first Graded victory in 2019 when scoring the G2 Kentucky Jockey Club Stakes, upon which he won the G3 Southwest Stakes. Yet, the results in his following outings meant he didn’t make it to the Kentucky Derby. Still, he managed to return at least to the G3 stage as he placed there three times in a span of two seasons; moreover, the Steven Asmussen bound grey triumphed in the G3 Steve Sexton Mile Stakes in May. He didn’t draw on that performance the next time out, but he needs to be respected as he’s a decent G3 horse. Together with Fulsome (3-1), he’ll carry the biggest weight, yet it’s not much higher than the rest of the field is assigned.

Fulsome, trained by Brad Cox, suggested some talent in 2021 as he climbed from maiden races up to Listed and Graded victories, especially the G3 Matt Winn Stakes. Later on, he added the G3 Smarty Jones Stakes triumph and fourth place in a G1 company to his record. In 2022, he commenced the season with a bang in the G3 Oaklawn Mile Stakes, where he bettered even a hot red favorite, Cezanne. In July, he bagged an Allowance, affirming to be still in fine form and ready to fight for another big one.

Mr. Wireless (9-2) is the third chance of the race thanks to his easy win in a Listed race in July. In the previous season, the Bret Calhoun bound gelding prevailed in the G3 Indiana Derby and G3 West Virginia Derby; thus, he has some experience with the local track, which might come in handy. He definitely wouldn’t cause an upset had he triumphed on Saturday. Todd Pletcher relies on Promise Keeper (5-1) with the G3 Peter Pan Stakes 2021 shining on his resume, and even though he finished third in the G2 New Orleans Classic Stakes in March, his most recent performance in an Allowance race was lacklustre. He could recover from that May run, of course, but the trio mentioned above looks just more appealing.

The Saturday field comprises some horses with fine victories in Allowance races, while Derby House (5-1) might be the best of them as in June, he cruised home to easy success, and it was quite apparent there is much more in him that he had to show back then.

Our pick for the West Virginia Governor’s Stakes is FULSOME, who should continue his progress here.

Another G3 dirt race of the meeting is open to three-year-olds who are about to vie for the purse of $500,000. Seven of them will clash at a mile and a furlong distance, while the field is quite stellar for a G3 event as it comprises three participants of the Triple Crown races.

Simplification (5-2) has been very consistent throughout his career, as after commencing the ongoing season with a Listed victory, he went on to finish second in the G3 Holy Bull Stakes, score the G2 Fountain of Youth Stakes, and place third in the G1 Florida Derby. His performance in the Kentucky Derby was a solid one as the Antonio Sano bound colt took fourth place, yet the Preakness Stakes came probably too soon, resulting in Simplification finishing only sixth. He’s received some time off since then, and because the distance suits him, he is the victory candidate here.

However, the field is of high quality, so he isn’t the favorite right now as We The People (2-1) gets the role due to his commanding performance in the G3 Peter Pan Stakes in May. Prior to that, he finished seventh in the G1 Arkansas Derby and subsequently didn’t handle the distance of the Belmont Stakes but on Saturday, he should appreciate the trip. Moreover, the Rodolphe Brisset bound colt has only five outings under the belt; therefore, there’s still some room for progress, which should show. Skippylongstocking (5-1) completes the trio of colts running in the Triple Crown races as the Saffie Joseph trained bay took fifth place in the Preakness Stakes and gave a fine effort in the Belmont Stakes, finishing third. He’s still just an Allowance victor who shouldn’t be good enough to bag this, yet he’s respected to some extent.

Brad Cox sends in Home Brew (3-1), who has recorded six starts and achieved two Listed wins. Last time out, he was pretty impressive in the TVG.com Pegasus Stakes at Monmouth Park, winning by more than six lengths. Suppose he repeats that on Saturday; he could be a great danger even for the duo of favorites. King Ottoman (6-1) is a black-type winner who finished third in the G3 Indiana Derby, while the field of seven is completed by a Listed victor Courvoirsier (15-1) and maiden winner Jr’s Gift (30-1).

Our pick for the West Virginia Derby is WE THE PEOPLE, who should forget the Belmont Stakes effort and return to winning ways as he’s definitely classy enough to do it.