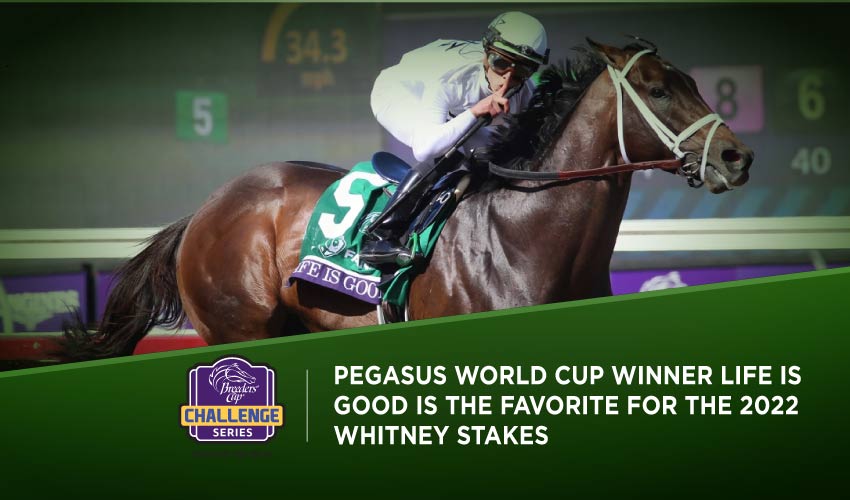 There’s racing of the highest quality at Saratoga on Saturday, with the clash between Life Is Good, Olympiad and Hot Rod Charlie in the G1 2022 Whitney Stakes the undisputed highlight of the weekend. The G1 Saratoga Derby is a reunion for the first six home in the Belmont version, led by the reinvigorated Classic Causeway, while high-class distaffers Matareya (G1 Test) and War Like Goddess (G2 Glens Falls) will be heavy favorites to continue their winning form.

The big Saturday races keep coming and one of the biggest of them all is the 2022 Whitney Stakes, won by track legends such as War Admiral, Dr Fager, Alydar and Kelso. This year’s renewal, the highlight of a stakes-heavy card at Saratoga on Saturday and a win-and-in for the Breeders’ Cup Classic, has drawn a short but select field bidding to follow in the footsteps of last year’s winner Knicks Go.

Top of the list to join the roll-call of legends is the scintillating Life Is Good (6-5), winner of last year’s G1 BC Dirt Mile and this year’s G1 Pegasus World Cup in his trademark trailblazing fashion, quick from the gate before setting fractions that take the opposition far out of their comfort zone – just like Knicks Go used to do.

He blotted his almost pristine copybook when running out of gas in the final furlong of the ten-furlong G1 Dubai World Cup, but bounced back as good as ever when kicking the high-class Speaker’s Corner to the kerb in the G2 John A Nerud at Belmont Park a month ago, drawing off to win by five lengths. That was over seven furlongs, but he’s equally at home over today’s mile-eighth.

Life Is Good will be on the lead, and it’s up to the rest to get him beat. If he gets his own way out there, he won’t come back.

Those tactics will suit his main rival Olympiad (2-1), who has improved hand over fist this year – he’s unbeaten in five in 2022 – and normally adopts a stalking role before pouncing in the stretch. He hasn’t yet won at the top level, but the manner and quality of his victory in the G2 Stephen Foster at Churchill Downs last month indicated that it was just a matter of time.

He stalked and pounced, finishing strongly over the mile-eighth to win by two and a quarter lengths from Americanrevolution (5-1), a barnmate of Life Is Good who is not expected to take his chance in the Whitney unless the rains come. Olympiad is still on an upward curve, and if he can stay close enough to Life Is Good he has the tools to be a major threat.

So does the reliable and consistent Hot Rod Charlie (9-2), whose only downside is that he doesn’t win as often as a horse with his class should – which is quite a substantial downside. He’s won a G1 – the Pennsylvania Derby – but has hit the board in five more, if you include his DQ from first place in last year’s Haskell.

He ran a perfectly acceptable race first time back from Dubai when runner-up in the G3 Salvator Mile at Monmouth Park, beaten a head, and will have blinkers back on today as trainer Doug O’Neill reckons he needs a little help to focus. For all his talent, he’ll probably need a career-best today.

His profile is similar to Happy Saver (8-1), also a barnmate of Life Is Good, who has a G1 under his belt – the 2020 Jockey Club Gold Cup – but has been runner-up three times at the top level and is riding a five-race losing streak.

He continued his unhealthy bout of seconditis when left for dead by Flightline in the G1 Met Mile at Belmont in June, and on his previous start was runner-up to Olympiad in the G2 Alysheba at Churchill Downs, beaten two and a half lengths.

It would be no surprise to see Happy Saver hit the board yet again, but it’s quite a stretch to imagine him winning. Zoomer (30-1) is outclassed.

The stars have come out for the Whitney, but the top-class LIFE IS GOOD is the brightest by far and can front-run his way to yet another G1 success.

The Turf Triple series moves camp upstate following the opening leg at Belmont Park, and it’s no surprise at all to see many of the same faces moving with it for the Saratoga Derby over a sixteenth of a mile shorter.

Seven of the runners from the G1 Belmont Derby, including the first six home, are in opposition again for a race that gives Classic Causeway (8-1) the chance to continue his reinvention as a grass horse after losing his form completely on the main track. The Belmont Derby was his first start on the lawn and the first for Kenny McPeek, and few foresaw the transformation those changes brought about.

The odds-makers don’t fancy Classic Causeway’s chances of repeating the dose and it’s unlikely he’ll be allowed to dictate as before, but there’s a chance that the experience will have moved him up and he has to be feared at a track where he made a winning debut last year.

Can the Europeans turn the tables? Both Nations Pride and Stone Age were a long way back before rallying through the stretch, both have a change of jockey, and neither will be particularly suited by the cutback in distance. Only a fool would dismiss them, but former Brit Royal Patronage, who is now with Graham Motion, is likely to do better given that he was rank through the early stages and was still right there at the wire. If he can rate, he can move up on that.

Sy Dog and Grand Sonata had earlier filled the exacta in the mile-sixteenth G3 Transylvania at Keeneland in April, three-quarters of a length apart, and there may not be much between them again. Indeed, a blanket finish such as the one at Belmont doesn’t suggest that there’s a superstar in the mix, so perhaps bettors should look to a new name on the Turf Triple trail.

Todd Pletcher has two of those, with the lightly raced Annapolis (5-2) preferred in the market after a comfortable victory in a stakes at Belmont over a mile, a distinct improvement on his first run of the year on soft ground in the G2 Penn Mile. This is a big step up in class and distance but Annapolis has the potential for considerable improvement and won on debut at the Spa last year.

His barnmate Emmanuel (8-1) made his first turf start a winning one when going coast-to-coast in the G2 Pennine Ridge over a mile-eighth at Belmont. He has less to prove than Annapolis and may well give Classic Causeway something to think about on the front end, although he can also sit off the pace.

Turf debutant Ethereal Road (15-1) will need the change of surface to make a big difference, as he has so far not looked capable of making it pay at this level.

There is no stand-out among the Belmont Derby contingent so perhaps EMMANUEL, who looked good on his turf debut, can continue to justify his lofty reputation.

There are a number of heavy favorites in the major events at Saratoga this weekend, but none is shorter than Matareya (2-5), who bids to stretch her winning sequence to five in the Test.

She has moved through the ranks step by step in 2022, going allowance, G3, G2 and most recently making her breakthrough at the top level in the G1 Acorn over a mile at Belmont Park, where she made all and drew off for an unhurried, unworried score by six and a quarter lengths.

Matareya was equally dominant at today’s distance when romping by eight and a half in the G3 Beaumont at Keeneland in April, in which Chi Town Lady (15-1), who doesn’t want to run this far, was a distant last of seven, and this represents a straightforward opportunity to embellish her record.

Only two of her rivals have won at Graded level, with Hot Peppers (5-1) punching that ticket in the G3 Victory Ride at Belmont over six and a half furlongs, when she rolled gate to wire for a game success with Sterling Silver (15-1) third, beaten three and a quarter lengths.

Today’s extra yardage is not guaranteed to suit Hot Peppers, who has bags of speed, but it’s fine for Sterling Silver, who won a Belmont stakes over seven furlongs two starts ago when November Rein (10-1) – a recent Belmont allowance winner – was beaten almost 14 lengths into third.

The other Graded-stakes winner is Elm Drive (8-1), who hasn’t built on that victory in the G2 Sorrento at Del Mar exactly a year ago. However, she didn’t run badly when third in the G2 Great Lady M, behind the highly progressive Becca Taylor, at Los Alamitos last time, especially as she hit the gate on departure. She makes her first start for trainer Michelle Nevin today.

Gulfstream Park maiden winner Wish You Well (12-1) makes her stakes debut and is very hard to like after finishing tenth of 11 in an allowance optional claimer at Churchill Downs.

It will be an enormous surprise if MATAREYA doesn’t take her second G1 and stretch her winning streak to five against these overmatched rivals.

No-one has won the Glens Falls more often than Bill Mott, and the master trainer puts two in the gate – including last year’s winner War Like Goddess – as he bids for his seventh success in the race.

Twelve months ago, War Like Goddess (1-2) rolled her rivals flat with a dominant performance, moving from the back to the front and clearing away to score by three and a quarter lengths, with longshot Temple City Terror (12-1) a neck further back in third. She had come off a victory in the G3 Bewitch at Keeneland and that’s the way it is this year too, a comfortable success against overmatched opposition that will have set her up perfectly for this back-to-back bid at a track where she is unbeaten.

Her barnmate Petricor (6-1) hasn’t taken the US by storm since moving over from France, but she stretches right out for the first time today and has a stamina-packed pedigree that suggests she’ll be seen to much better effect at this distance.

No distaff contest at the Spa is complete without a Chad Brown runner, and Virginia Joy (5-2) gets a little class relief after finishing fourth behind barnmate Bleecker Street in the G1 New York at Belmont Park in June. Prior to that she blew the G2 Sheepshead Bay apart on soft ground, romping by 14 lengths, and this ex-German mare will have no problem with today’s distance, although her chances would be enhanced by plenty of rain.

Last time out Key Biscayne (30-1) made her breakthrough at Graded level, springing a 36-1 surprise in the G3 Robert G Dick Memorial over a mile and three-eighths at Delaware Park, with 82-1 shot Treasure Tails (50-1) three and a half lengths back in fourth and Temple City Terror a never-in-it seventh as favourite.

This is clearly much tougher but Key Biscayne is in the form of her life and may well move up again. Flanigan’s Cove (20-1) makes her stakes debut here and could be out of her depth.

This looks a tougher test than 12 months ago, but WAR LIKE GODDESS has everything in her favour and is the choice to follow up last year’s victory.