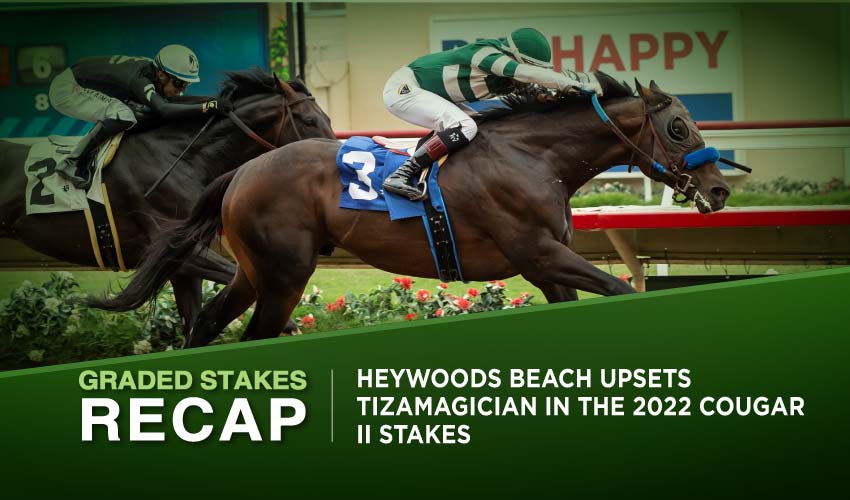 On Sunday, two races of the Del Mar racecard piqued some interest, especially the G3 Cougar II Stakes, where Tizamagician attempted to become a back-to-back winner; however, he had to settle for second place as Heywoods Beach was better this time. In the 2022 Wickerr Stakes, outsider Irideo landed the spoils, while preferred G1 winner Smooth Like Strait unfortunately scratched prior to the race.

This G3 dirt race held over the distance of a mile and a half attracted a field of six three-year-old and older horses, among which Heywoods Beach (31-10) struck gold after a fine ride delivered by Ramon Vazquez. Vying for the purse of $125,000, the five-year-old bay was the second chance here and traveled in second place, following preferred Tizmagician (9-10) quite closely. In the final turn, Heywoods Beach hinted he was about to use the weight advantage of the favorite, took command, and even though his rival fought back, the John Sadler trained horse scored in 2:30.09. Leaving Tizamagician in second by a length, Heywoods Beach enjoyed his premiere Graded victory on Sunday. Extra Hope (34-5) snatch up a close third place.

Although Tizamagician was a favorite of the Cougar II Stakes that he won in 2021, he was entering the season by this run, thus his defeat could be excused and he might return to winning ways in his following outing. However, it shouldn’t take anything away from the victor as Heywoods Beach showed a very good effort. At the G3 stage, he’ll be respected next time out without a doubt, which also applies to the third Extra Hope as he was willingly approaching the more successful duo in the closing stages.

After Smooth Like Strait, a red-hot favorite of the black-type turf event, scratched, the mile-long race found its new leading chance in Gregorian Chant (19-10). The purse of $100,000 lured in a field of eleven three-year-old and older participants, while none of the preferred contestants could resist the late finish that outsider Irideo (32-1) showed off. The Argentina-born six-year-old galloped in the rear, but his jockey Hector Berrios waited patiently for a gap to open at the fence, which occurred in the final stretch. Subsequently, he navigated his mount among the rivals to reach the leaders in time, and suddenly, Irideo was fighting for the win, which he seized by ¾ of a length. Crossing the wire in 1:35.50, the chestnut left Gregorian Chant in second and Bran (3-1) in third.

The victorious son of Easing Along spent most of his career in Argentina, where he bagged even a G1 triumph, while in 2022, he has four outings in the US under his belt. After two seven places in the Allowance races, he finished second at the same stage; still, he belonged among the outsiders in the Wickerr Stakes. However, he enjoyed the race immensely, Hector Berrios gave him a lovely ride, so the Marcelo Polanco bound horse caught off guard both respected runners, Gregorian Chant and Bran.