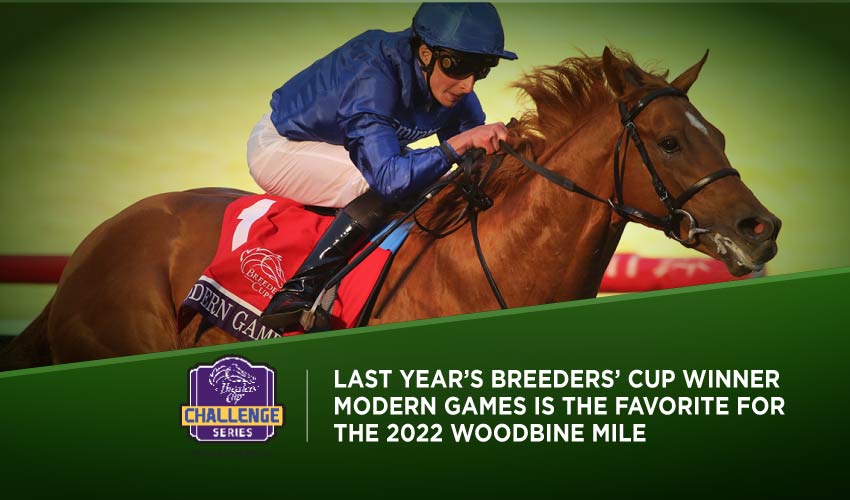 There are three G1s over a mile on turf at Woodbine on Saturday and European raiders are well represented, with last year’s Breeders’ Cup winner Modern Games in the 2022 Woodbine Mile and his barnmate Mysterious Night in the Summer Stakes are warm favorites to take the dollars back across the Atlantic. The Natalma Stakes is a more complicated contest with four of the first five home in a stakes here last month – led by Cairo Consort and Adora – renewing rivalry at a higher level.

Godolphin, Charlie Appleby, and William Buick have another major chance in the Summer, a win-and-in for the Breeders’ Cup Juvenile Turf and a race owner and trainer won last year with Albahr.

This time their representative is Mysterious Night (6-5), who would not be Appleby’s best juvenile but certainly in the top five after his victory in the seven-furlong G3 Prix Francois Boutin at Deauville last month. He had too much use made of him when third in the G2 Vintage at Goodwood on his previous start, in front a long way from home and caught in the final furlong, but more patient tactics worked in France and will be employed here, and the extra yardage should be within his power.

Main rival Philip My Dear (2-1) is unbeaten in two, both here and most recently in a stakes over six and a half furlongs, when he rallied hard from the back of the pack to get up late and score by three-quarters of a length, with Stayhonor Goodside (6-1) a head further back in third after getting outkicked, Chiseler (12-1) a half-length away in fourth and Ninetyfour Expos (15-1), barnmate of the winner, a further half-length away fifth after being in front at the stretch call. All these beaten horses were making their debut on turf.

Philip My Dear caught the eye that day and there’s more to come, especially now he stretches out. It seems likely that he’ll confirm the form with those he finished ahead of last time.

Saratoga maiden winner Appraise (5-1) then dipped a toe into stakes company at the Spa and wasn’t disgraced to be fourth, beaten two and a half lengths over what was probably an inadequate five-a-half furlong. Expect him to move up for stretching out, and Chad Brown doesn’t throw his horses from a stakes into a top company unless he has seen something that tells him they’re ready.

Sammy Stone (20-1) may not be ready yet, having finished second on his debut here over six furlongs on the synthetic track, doing all his best work late as the penny took time to drop. There’s ability there but this could be a culture shock.

If G3 winner MYSTERIOUS NIGHT handles stretching out to a mile he will be very hard to beat in what is a relatively soft G1 contest.

We are lucky in 2022 that there are two all-time greats on the world’s racecourses, Flightline and Baaeed, and although neither of them will be anywhere near Toronto on Saturday the feature Woodbine Mile – a win-and-in for the Breeders’ Cup Mile – provides a connection to that remarkable level of form.

A US audience will be familiar with Godolphin runner Modern Games (7-5), who won the G1 Breeders’ Cup Juvenile Turf at Del Mar last year and has maintained that level during this campaign. He won the mile classic G1 Poule d’Essai des Poulains at Longchamp in May and ran a career-best last time when second-best to the mighty Baaeed in the G1 Sussex at Goodwood in July, never threatening the great champion but keeping on late to be beaten a length and three-quarters.

Nothing in this field can match that form, it’s the best in the world at a mile, and if he gets a clear trip it’s hard to see anything beating Modern Games, the only three-year-old in the race and still open to further improvement.

The best of the local defense is Ivar (4-1), a lightly raced former Brazilian runner who has finished in the first four in the last two editions of the BC Mile, beaten just a length and a half 12 months ago. On his first start since then, he didn’t have to be at his best to take a mile-sixteenth stakes at Horseshoe Indianapolis, and that will have set him up nicely for this much stiffer test. Fellow former Brazilian Homer Screen (10-1) is zero-for-four in the US and looks to need an easier spot.

Indeed, a glance at the morning line indicates that everything else is playing for places, with nine horses stacked between 10-1 and 20-1, good horses but not bona fide aces. Get Smokin (10-1) hasn’t won since May 2021 but did well enough when fourth in the G1 Fourstardave at Saratoga to suggest the flame is still alive.

He’s a pace angle while barnmate March To The Arch (12-1) is a late closer, although he has lacked sparkle this year and was only fourth in the G2 King Edward over course and distance, with Town Cruise (20-1) one place and a length and three-quarters behind. Town Cruise went gate-to-wire to win this 12 months ago but has shown little in two starts in 2022.

The lone filly Wakanaka (10-1) made her first visit to Woodbine a winning one when beating a subsequent G2 winner in the G2 Dance Smartly over a mile-sixteenth and should enter calculations for exotics, as should G1 Maker’s Mark Mile winner Shirl’s Speight (12-1), although he has been off-point since that victory and threw in a clunker here latest.

Another pace angle is War Bomber (20-1), who led all the way in the G3 Seagram Cup here on synthetics, a career-best but one that still gives him something to find on this surface in this company, while the other British raider Finest Sound (10-1) was runner-up in a very weak G2 at Goodwood last time, has never won a stakes and prefers to be on the pace, which he may not manage given the fast gate speed of the locals.

The best individual piece of form and the best body of work belong to MODERN GAMES, and it’s impossible to oppose the dual G1 winner.

There is no overseas raider in the Natalma, a win-and-in for the Breeders’ Cup Juvenile Fillies Turf and the distaff equivalent of the Summer, and Kevin Attard and Mark Casse have more than half the field between them as Casse bids for a record eighth success in the race and Attard eyes his first.

Neither have the morning-line favorite, though, that privilege falling to Nathan Squires who sends the progressive Cairo Consort (2-1) to the gate after two wins here over six and a half furlongs, the most recent coming in a stakes last month against several of today’s rivals. She got a dream run up the rail right when she needed it and quickened away to score by two and a half lengths from Casse’s first-string Adora (6-1), looking as though she’d appreciate stretching out.

Adora, an impressive debut winner over four and a half furlongs on the synthetic track here, had in between slipped south of the border for the G3 Schuylerville at Saratoga, in which either the main track or the class upgrade proved beyond her and she finished last of seven. She bounced back well on her first try on the lawn and there may be more to come.

Back in third, beaten a head by Adora, was Collecting Flatter (8-1), giving up her unbeaten record after winning her own stakes on her previous start, making every yard over five and a half furlongs on the synthetic surface here for a comfortable success. Whether the switch in surface found her out last time is uncertain, but it’s certainly a factor to consider.

Fifth as favorite was Wickenheiser (3-1), the best-fancied of Attard’s trio, who won on debut here over six furlongs – with Cairo Consort fourth – before finding herself a long way back and unable to do much about it. She was forced so wide on the turn she may as well have cut through the car park and is likely better than this suggests.

Attard also saddles Courtly Ro (10-1), who rallied well to get up late and beat the debutante Star Candy (12-1) by a half-length in a seven-furlong maiden here last month. Obviously, Star Candy – barnmate of Adora – will move up for the experience and it was a fine effort against more seasoned rivals. Attard’s third string is the maiden Last Call (15-1), who may well find these waters too deep at this stage.

The only filly without any Woodbine form – which may not be a disadvantage – is G Laurie (4-1), an impressive winner on debut over a mile-sixteenth at Colonial Downs last month when she cleared right away to score by six lengths. She merits this big class hike in what is not – on paper at least – the strongest G1 ever run and her proven stamina may be a crucial factor.

An open race with good local stakes form, but G LAURIE was an impressive winner on debut and looks ready for this steep class upgrade.

Follow us on Social Media for more 2022 Woodbine Mile updates!