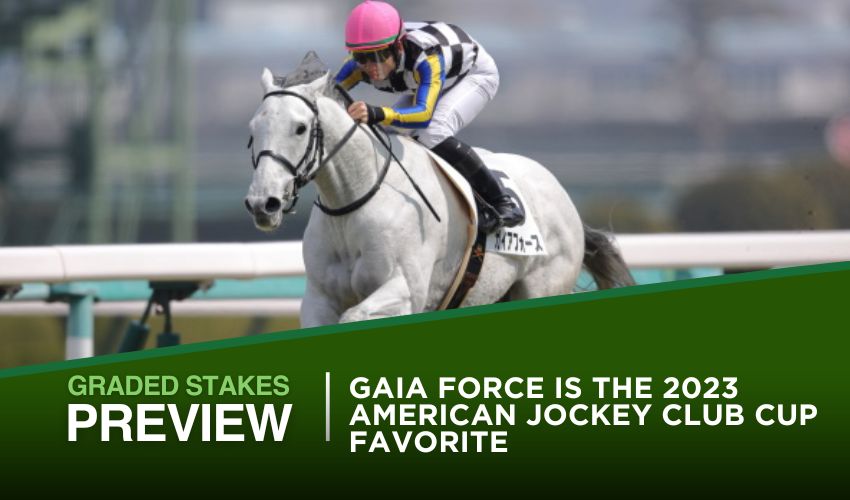 It will be fascinating to see if the 2021 Japanese Oaks winner Uberleben can get her career back on track in The American Jockey Club Cup with a class drop sure to help, and watch out for the flying grey and likely favorite Gaia Force.

In the Tokai Hai, the unexposed Promised Warrior is shooting for a four-timer and looks to be the one horse in the field that can go on to tackle Grade 1 company in the near future.

We have a very exciting race in prospect with Gaia Force likely to be popular on the boards after battling bravely to win the Asahi Hai St Lite Kinen in this spot two back. Was outclassed in the Grade 1 Japanese St Leger back in October, but is now 3-6 and sure to go well for French jockey Christophe Lemaire.

The 6-year-old and 2021 winner of this race Aristoteles has not won since that race so is very hard to make a case for. However, on the other end of the spectrum we have the very lightly raced Epiphany (5/1), who has only had six starts and has won the last four of those in good style. His first two runs were placed efforts in maidens, so is clearly on an upward curve. Takes a big step up the class ladder today, but cannot be discounted in his current mood.

One of the proven class horses in the race is Uberleben who won the Japanese Oaks back in 2021 but has yet to visit the winner’s circle since. She has been running most of her races at the top table and gets a welcome class drop today, and should not be underestimated in these much calmer waters.

If we are looking at others that can take a hand in the finish, then the three that could upset the favorite are North Bridge, Babbitt, and Studley.

North Bridge won two of his four races last season and ran well two back when 5th in a Grade 2. Was clearly outclassed last time, and with a class drop today has a chance to grab a slice underneath.

Babbitt is another with chances of hitting the board. His three-year-old career saw four wins on the trot, but he has found it tougher since, and the six-year-old is another taking some class relief today.

Another of interest is Studley who has a very solid record 16-4-4-4-0 and although he is taking a big step up the class ladder today, he could outrun his big odds.

A very tough race to call and we are going with some value on the morning line odds. It’s going to be tough to beat the favorite Gaia Force but UBERLEBEN clearly has plenty of class and should go close against these slightly easier foes.

Gaia Force will be a popular choice on the boards and will be short odds to dispatch his rivals. However, he could find one or two too good, but should still grab a slice of this purse.

The improving Epiphany and the big outsider Studley can certainly be expected to run well and should be in there battling for this lucrative prize.

We have to start with the likely favorite Hagino Alegrias who has won four of his last six and has top jockey Yuga Kawada taking the mount. The six-year-old has been in sparkling form and grabbed his first graded stakes win last time. He missed the whole of 2021 through injury but came back strong with three runs in 2022 and looks sure to progress further, even though this will be his toughest assignment so far.

His biggest challenge looks to be coming from the lightly raced four-year-old Promised Warrior who has won his last three starts and is now four wins from six career starts. This is a big step up the class ladder, but the horse is in flying form and will be very difficult to keep out of the first three.

Looking further down the card and an interesting class dropper is Smashing Hearts who ran well in a Grade 1 last time and had put up a strong closing effort back in November. He is yet to win in graded stakes company, but will certainly appreciate this easier opposition and could outrun his big morning line odds.

One of the most experienced runners here is the 7-year-old Gempachi Lucifer, and he is certainly no back number after winning a Grade 3 last time over 1700 meters at Kokura, and has a chance to grab a slice of this big prize money pie.

Of the lesser exposed horses, we like two of these and they are Diktaean and Welcome News, and of the two, the pick would be Welcome News who has won four of eight career starts and is two from the last three. He won a minor stakes race last time showing plenty of speed, and he could attempt to go gate to wire here.

Of the others, then Vanyar looks like a long shot of interest. He won two of his six starts last year and closed out with a good second in this grade at Nagoya over 2100 meters but has won over shorter and is sure to be one of the late closers in this.

A Grade 2 in name but not too many graded winners in the line-up, including the favorite Hagino Alegrias. He is sure to make a bold bid, but the vote goes to PROMISED WARRIOR who has won his last three starts and comes here in top form.

Smashing Hearts looks to have been given a chance with the class drop and along with Welcome News are two that should be in the firing line as they close down to the wire, and for exotics players, we could not put you off of Vanyar who could well hit the board at massive odds.

Raise your winning opportunities with our Horse Betting Guide. We offer a guide for all levels!