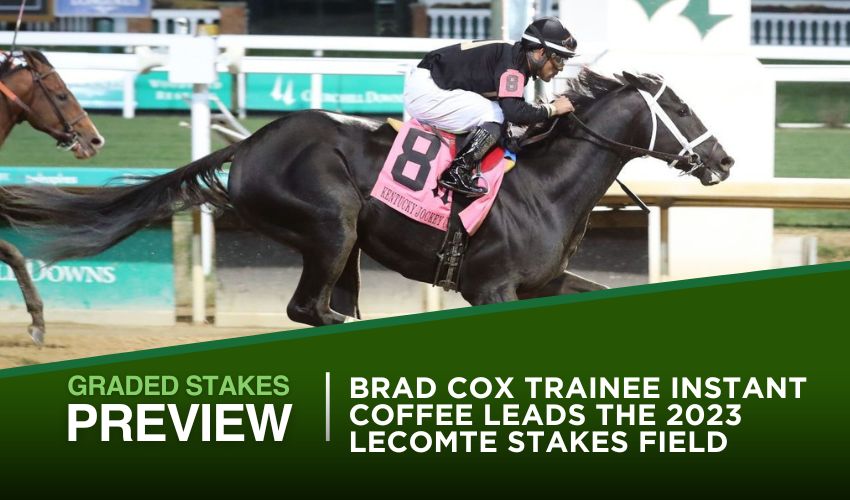 The weekly diet of Kentucky Derby preps continues with the G3 2023 Lecomte Stakes at the Fair Grounds on Saturday, which offers RTKD points on a 20-8-6-4-2 spread. G2 winner Instant Coffee is a worthy favourite but will face a stern test from G3 winner Two Phil’s in a race in which the pace will be crucial.

Another small piece of the Kentucky Derby puzzle clicks into place with the Lecomte, the main event at the Fair Grounds on Saturday with 20 RTKD points on offer to the winner. Last year’s race featured high-class runners Epicenter and Cyberknife and there are similarities this time around.

Brad Cox, who could well be set for a banner afternoon, trained Cyberknife and sends out Instant Coffee (5-2) in the same ownership. Instant Coffee was given a tough spot for his stakes debut in the G1 Breeders’ Futurity at Keeneland in October and did well to finish fourth behind presumptive champion Forte, with Two Phil’s (4-1) almost four lengths behind in seventh.

He rebounded perfectly, finishing off his race strongly to take the mile-sixteenth G2 Kentucky Jockey Club at Churchill Downs, grinding out an unflashy victory with Denington (8-1), who gets blinkers for the first time today, two lengths behind in fifth. There should be plenty of pace for Instant Coffee to run at and he sets a good standard.

Two Phil’s bounced straight back too, powering through the slop at Churchill Downs to win the mile-sixteenth G3 Street Sense by five and a quarter lengths. Rain is forecast, which could play in his favour, and he rates a big threat.

Instant Coffee’s barnmate Tapit’s Conquest (9-2) has been off for three and a half months since breaking his maiden in promising fashion over a mile-sixteenth at Churchill Downs (Denington a well-beaten sixth). This is obviously much tougher but he is held in high regard and may move forward a long way after his break, although he also holds an entry in an allowance earlier in the afternoon.

The pace may come from Echo Again (6-1), representing the same connections as Epicenter, who still has fences to mend after a dreadful effort in the G3 Iroquois at Churchill Downs in September. He showed more when third in the Springboard Mile at Remington Park last time, but was nevertheless beaten more than four lengths and is using up a lot of credit. His rail post is a positive.

Keith Desormeaux won this 12 months ago with longshot Call Me Midnight and tries again with Confidence Game (8-1), who could also be a pace angle after wiring a mile-sixteenth allowance optional claimer at Churchill Downs in November, although it would be a surprise if he can stay out there.

The unbeaten Bromley (5-1) comes off a six-furlong AOC score on the synthetic surface at Turfway Park and that gives him questions about stamina and surface to answer, although he won his debut on the main track. Barnmate Itzos (10-1) is an unlikely starter.

Brad Cox has the aces again but TWO PHIL’S was an impressive winner last time, won’t be foxed by the forecast rain, and looks capable of making further improvement.

Raise your winning opportunities with our Horse Betting Guide. We offer a guide for all levels!

Follow us on Social Media for more 2023 Lecomte Stakes Updates!