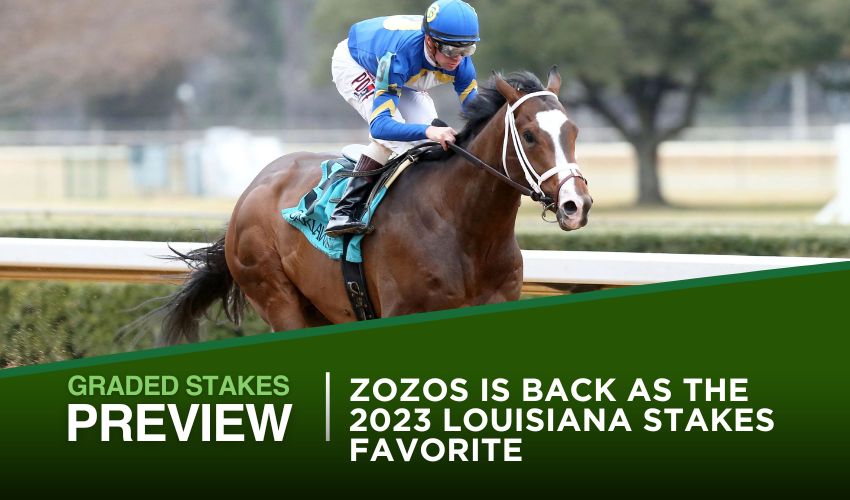 New Orleans takes centre stage on Saturday with a stakes-heavy card at the Fair Grounds, one of the most historic racetracks in the US. Trainer Brad Cox is very well represented, with former Kentucky Derby hope Zozos returning to the scene of a recent victory in the G3 2023 Louisiana Stakes, and G1-placed Chop Chop playing the class card in the ungraded Silverbulletday, a 20pt prep for the Kentucky Oaks.

A name from the past resurfaces in the Louisiana at the Fair Grounds on Saturday, a shooting star who fell to earth without a sound and is now on a mission of redemption. Do you remember Zozos? Well, he’s back.

Zozos made a winning debut here on this weekend last year and then returned to New Orleans in March to run a fine second in the G2 Louisiana Derby. That was enough to send him to the G1 Kentucky Derby as a quietly fancied 48-1 shot, but he was caught up in that stupidly fast speed duel and paid the price, dropping away to finish tenth.

That was the last we saw of him until he reappeared in an allowance optional claimer over this course and distance in mid-December, when he cruised home at odds-on, looking as though he was ready for bigger, better things.

Now he gets his chance to make his Graded-stakes breakthrough with plenty in his favour – the competition is not particularly strong, he has finished in the first two on all his three starts at this circuit, and his trainer Brad Cox has won the last three runnings of this race. With only five starts under his belt, the potential for improvement is considerable.

Most of his rivals come on here from the ungraded Tenacious over course and distance a month ago, won in come-from-behind style by Happy American, who was signing for his first win at stakes level. He won comfortably by two and three-quarter lengths from Mr Wireless, winner of last year’s G3 Indiana Derby and G3 West Virginia Derby, and a length back in third was Zozos’s barnmate Forza Di Oro, who hasn’t recovered his smart form of fall 2021.

Fifth was the perennially overmatched veteran Chess Chief, while stakes debutant Business Model and Intrepid Heart, who ran in the 2019 Belmont but now works the claiming beat, came home sixth and seventh.

Happy American merits careful consideration, being a horse on the up and on his third start following a long layoff, but it’s debatable whether he can hold his own against a potential class act like Zozos.

Bret Calhoun puts three in the gate; Mr Wireless is the most seasoned but his barnmates shouldn’t be ignored. Turf runner Gentle Soul was an easy winner of an off-the-lawn four-runner AOC here over an extended mile, but this is a huge step up away from his preferred surface.

Run Classic finished a half-length ahead of Happy American when they ran two-three in a mile-sixteenth AOC at Churchill Downs Racetrack, which puts him in the mix, although he disappointed in an Oaklawn Park Stakes last time and could be out of his depth again.

This could be easy pickings for the resurgent ZOZOS, who showed that his mojo was still working well when an easy winner over course and distance last time.

It could be quite a day for Zozos’s trainer Brad Cox, who also holds a very strong hand in the Silverbulletday, which offers ‘Road to the Kentucky Oaks’ points on a 20-8-6-4-2 spread.

His primary hope is the versatile Chop Chop, who won her first two starts on turf – including a stakes at Kentucky Downs – before showing excellent form on the main track. She went under by only a nose when charging hard against the front-running Wonder Wheel in the mile-sixteenth G1 Alcibiades at Keeneland, and the winner went on to take the G1 Breeders’ Cup Juvenile Fillies at the same track and very likely the Eclipse Award for champion two-year-old filly.

The fly in the ointment is Chop Chop’s performance in that BC Juvenile Fillies when a warm favourite – she had a rough trip, got hung out wide and could never figure, eventually trailing in last of 13. It may be safe to toss that given the circumstances, add in her recent sparkling works, and she stands out a mile with class relief on her side as well.

Her barnmate The Alys Look broke her maiden over course and distance in December and moved up nicely on her stakes debut next time, again over this course and distance. She couldn’t lay a glove on the easy winner but she was clear second-best with five and a half lengths back to the third, and clearly superior to fourth-placed Hayunevano, who broke her maiden here over a mile-sixteenth, and Cotton Candy Annie back in seventh.

If The Alys Look takes a more prominent position she could be a dangerous rival for her barnmate given her affinity for this circuit, although there’s an obvious gulf in class between them as it stands.

Fellow Fair Grounds fan Norah G has never run anywhere else and took a state-bred stakes over six furlongs as a hot favourite on her last start. However, Louisiana-breds are not a deep division and this is a major class hike, along with the requirement to stretch out beyond six furlongs for the first time.

Amber Cascade made her first visit to the Fair Grounds a successful one when breaking her maiden at the third attempt, leading at halfway over a mile-sixteenth and driving clear through the closing stages for a comfortable win.

It showed promise but she’ll obviously need to move up plenty to make her presence felt, which also applies to Forest Chimes, a romping winner here on debut over a mile-sixteenth against more experienced opposition. There was plenty to like about that performance and improvement is almost guaranteed.

It’s hard to look beyond Brad Cox’s pair and CHOP CHOP is the clear choice. Her Breeders’ Cup defeat is easy to forgive and this represents considerable class relief.

Take advantage to our free Horse Betting Guide and become a winner today. We offer a guide for all levels!