A Big Day for Trainer Michael McCarthy at Santa Anita 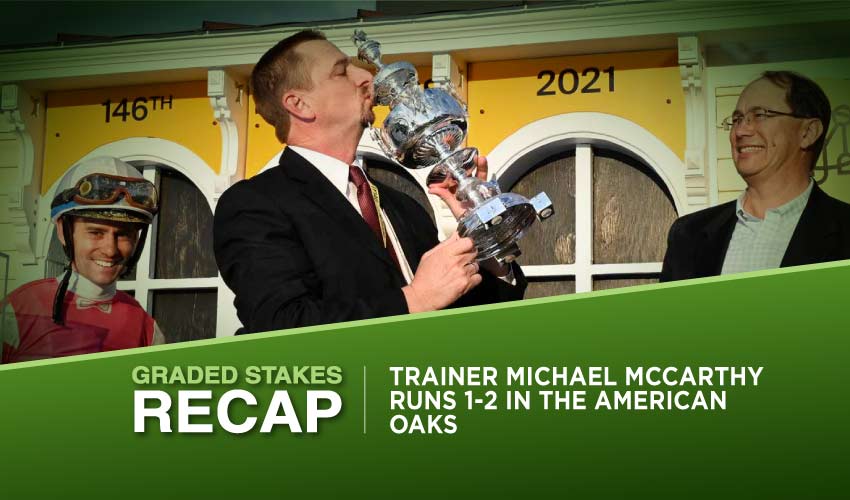 Opening day at Santa Anita on Sunday had a very different look about it, with all the turf races switched to the main track and downgraded after almost four inches of rain turned the grass course to mud. Trainer Michael McCarthy was the main beneficiary of the move, winning the American Oaks with Queen Goddess and the Mathis Mile with Law Professor.

Trainer Michael McCarthy made the very best of a difficult situation when saddling the one-two in the American Oaks at Santa Anita on Sunday, a race downgraded to Grade 2 status after all the turf races on the card were switched to the main track.

It’s usually unsatisfactory when races are moved off the turf, with all well-made plans and plays thrown out of the window, but McCarthy was one of the few who came up smiling when 14-1 chance Queen Goddess outran barnmate Nicest, both fillies having their first experience of racing on dirt and taking to it well.

“That was very good. It was spectacular,” said Michael McCarthy, who had four starters. “I gave all my owners the option to scratch their horses. It’s a Grade 1 [sic] and I didn’t know what to expect with the surface change.”

Neither did bettors, because the odds-on favourite Going Global could finish only sixth on her dirt debut after threatening briefly around the turn. That didn’t concern Queen Goddess, who went gate-to-wire under jockey Juan Hernandez and kept on strongly through the stretch to win by two and three-quarter lengths from Nicest, stopping the clock in 2:04 and three-fifths. Fluffy Socks came from last at halfway to finish third, three and a quarter lengths further back.

Queen Goddess, a daughter of Empire Maker, was making her breakthrough at stakes level and took her record to three-for-six. She will stay in training next year.

The San Gabriel suffered most from the switch to the main track with three of the seven entries scratched, but Bob And Jackie thrived on the unfamiliar surface and led at every call under jockey Jose Valdivia to break a nine-race losing streak.

It was the five-year-old’s first victory at Graded level, and the 5-1 shot showed plenty of determination through deep stretch to turn back the strong challenge of odds-on Friar’s Road and score by a nose, with Ready Soul a half-length back in third. The time for the nine furlongs was 1:53 and one-half.

“We never tried him on the dirt before,” said trainer Richard Baltas. “But we had nothing to lose with all the scratches, and he dug in for a great win.”

Professor lays down the law

Michael McCarthy sparked his Graded-race double when Law Professor came out on top in the Mathis Mile, making his breakthrough at stakes level after an exciting stretch duel.

The Constitution colt, the 4-1 third-choice, sat behind the brisk pace set by the favourite Beyond Brilliant until jockey Jose Ortiz sent him up to join battle on the far turn. At the top of the lane the two had the race to themselves, and Law Professor steadily nosed ahead through the final sixteenth to win by half a length, stopping the clock in 1:37 and two-fifths. There were eight and a half lengths back to Tarantino in third.

Make sure to stay tuned for the latest Horse racing odds, Races results and racing entries. Sign up NOW and get a 10% rebate.

Follow us on Social Media for instant Michael McCarthy updates!