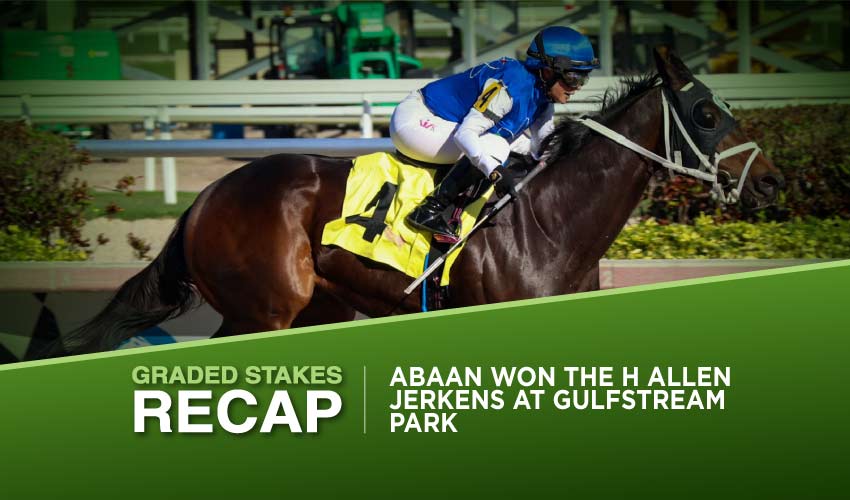 The Christmas Eve feature at Gulfstream Park was the quirky marathon test of the H Allen Jerkens, won in gallant all-the-way style by the lightly raced Abaan, who was giving trainer Todd Pletcher a record fourth victory in the two-mile contest.

It was not the most visually enthralling contest – at least not to American eyes, which are used to speed and flair – but the Allen Jerkens at Gulfstream Park on Christmas Eve was won in thoroughly effective and honest fashion by the improving Abaan, for whom this was a breakthrough victory at stakes level.

The four-year-old son of Will Take Charge had taken six tries to get rid of his maiden tag, something he only managed as recently as September, but with that victory at Saratoga came confidence and improvement and he has been making up for lost time ever since. He went to Gulfstream off a lifetime best in an allowance at Aqueduct and came away with another lifetime best on his stakes debut, despite never having run anything close to the two miles before.

That was also the case for several of his rivals, and Abaan took the race to them, out of the gate fast and quickly into a lead the 7-5 favourite would never relinquish. Luis Saez schooled him through very leisurely fractions – 27.88 for the first quarter, and the pace didn’t pick up for the whole of the next circuit – all the while conserving the gelding’s stamina for this step into the unknown.

Push eventually came to shove as the field circled the far turn for the second time, and when Saez opened the taps only second-favourite Ajourneytofreedom could go with the leader, and not for very long. Abaan was three lengths clear at the stretch call and kept on galloping, extending his advantage over Ajourneytofreedom – the best of trainer Mike Maker’s four runners in the race – to four and a half lengths at the wire, stopping the clock in 3:21 and three-fifths.

Fantasioso came home third, three and a quarter lengths further back, in a race in which the first three across the line occupied those positions throughout. It was the sort of race staged every day in Britain and Ireland, but this gruelling exam is much more of a novelty in the US. Exciting it may not have been, but Abaan was certainly an impressive winner.

“He controlled the pace and when I came into the stretch, I had a lot of horse left,” said Saez. “It was a long distance, but every step he felt comfortable. He just did it pretty easy.”

The Allen Jerkens – named for the late Hall of Fame trainer, known as the ‘Giant Killer’ for his habit of upsetting great names such as Secretariat, Kelso, Forego, and Buckpasser – has become a traditional pre-Christmas present for fellow Hall of Fame trainer Todd Pletcher, whose success with Abaan was his fourth in the marathon contest since it was inaugurated in 2015.

Make sure to stay tuned for the latest Horse Racing odds, Race Results and racing entries. Sign up and get a 10% rebate.

Follow us on Social Media for instant Abaan updates!