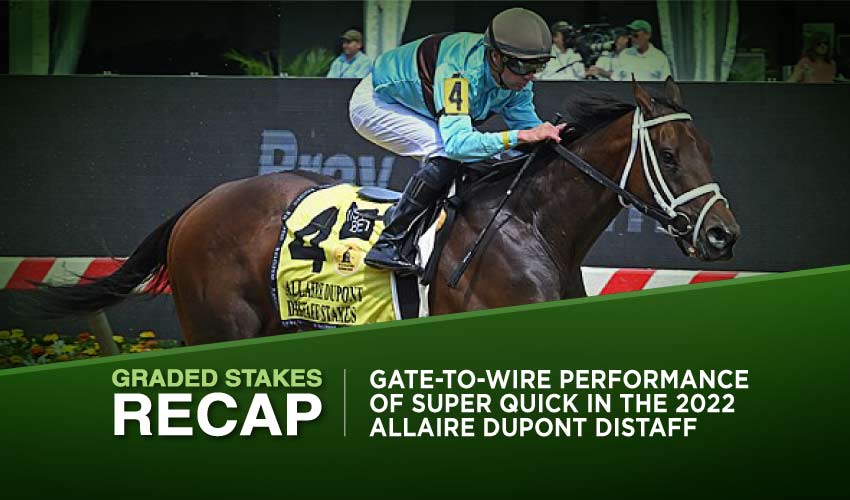 The brightest spotlight at Pimlico on Friday shone on Interstatedaydream, the filly posting the best performance of her career to take the feature G2 Black-Eyed Susan Stakes. The most eyecatching display on a stakes-heavy card came from Super Quick, who led from the gate to win the G3 Allaire DuPont Distaff by upwards of 14 lengths, while there were also victories for First Captain (G3 Pimlico Special), Lady Scarlet (G3 Miss Preakness) and Can The Queen (ungraded The Very One).

The form of the Kentucky Oaks got a big boost when Interstatedaydream produced an irresistible stretch run to win the Black-Eyed Susan, the distaff equivalent of the Preakness and the feature event at Pimlico on Friday.

Interstatedaydream – the 6-1 third-choice – had run third behind subsequent Oaks runner-up Nest in the G1 Ashland last time, and stamped her class on this race when turning back the challenge of favourite Adare Manor to win by a length and a quarter, with the rallying Radio Days getting up for third, a length further back. The Brad Cox-trained filly stopped the clock in 1:48 and four-fifths.

“She was very comfortable during the race and had something left down the lane,” said jockey Florent Geroux. “I expected Adare Manor to be a little bit forwardly placed, but when she sat right off me, I just took advantage.”

It was the most straightforward of races for Interstatedaydream, who sat just behind Beguine as she set consistent fractions and followed her all the way to the top of the stretch. That’s where Beguine imploded, dropping right out, but Interstatedaydream kept running hard, and although Adare Manor never let up in pursuit she couldn’t locate another gear and was never going to catch the winner.

This was the third win from five starts for the daughter of Classic Empire, and her first at stakes level. Her next target has not yet been confirmed, although the Woodbine Oaks on July 24 is a possible midsummer objective.

“All wins are great,” said owner Staton Flurry, who also has multiple G1 winner Shedaresthedevil. “A five-grand claimer or a Grade 1, they all mean a lot.”

On his previous start he ran the worst race of his life, but this time First Captain produced a lifetime best to steal the Pimlico Special in the final strides.

The dawdling pace set by Untreated meant that the front end was the place to be, so the 5-1 third-choice, equipped with blinkers for the first time, deserves extra credit for coming through from mid-pack, closing hard down the stretch to grab the favourite Vindictive in the shadow of the wire and put his head in front for the camera. Untreated stuck around for third, another length and a quarter away; the stopwatch showed 1:56 and one-fifth.

“When he gave me that turn of foot I knew he was coming,” said winning jockey Luis Saez. “Today he proved he’s a pretty nice horse.”

First Captain certainly needed to prove it after a dull effort in the G1 Carter, but the Shug McGaughey-trained colt is now five-for-seven and has paid back a big instalment on the $1.5m he cost as a yearling. Next stop could be the $1m G1 Whitney at Saratoga on August 6.

The Allaire DuPont Distaff was little more than a stroll in the park for Super Quick, who annihilated her rivals with a majestic gate-to-wire performance.

The 2-1 third-choice broke on top under Florent Geroux and just kept improving her position, soloing her way seven lengths clear off the home turn and easily extending her advantage through the stretch. Geroux didn’t need to go to the whip but for some unknown reason he did, before Super Quick crossed the line 14 and a quarter lengths clear of the favourite Exotic West, who in turn had a length in hand over Frost Point in third. The time was 1:47 and four-fifths, just half a second outside the track record.

“She’s named correctly,” said trainer Norm Casse. “I’m not so sure that she’s a filly who needs to be on the lead, but she’s certainly much better when she can get into her rhythm early.”

It looked a lot of money when she was claimed by trainer Mike Maker for $150,000 after her fourth start, but Lady Scarlet has paid it all back and more and made her Graded-stakes breakthrough with a dominant success in the Miss Preakness.

In a race diminished by the late scratch of morning-line favourite Under The Stars, the hectic fractions set by odds-on favourite Happy Soul and Gimmick set things up nicely for Lady Scarlet, who cruised past the front-runners in mid-stretch and kicked on to win by three and three-quarter lengths, with Happy Soul seeing off Gimmick for the silver medal by a length. The 5-2 second-choice stopped the clock in 1:10 and change.

“I got a perfect trip,” said jockey Irad Ortiz. “She did everything right – they went out a little fast and I was right there behind them, waiting for the time to go. I had plenty left for the stretch.”

The Very One Stakes

There was another all-the-way victory – although not in the startling fashion of Super Quick –  in The Very One, when Can The Queen doubled her tally of stakes wins with a comfortable success.

The six-year-old mare was away from the gate swiftly under Victor Carrasco and had her rivals under pressure as she turned for home, the 6-1 fourth-choice rolling on majestically to win by a length and a half from the late-running favourite Honey Pants, in a time of 57 and change. The longshot Whispurring Kitten, who had chased the winner hard from the gate, kept on gamely to hold third spot, a length further back.

“I’ve been taking my time with her,” said trainer Rodolfo Sanchez-Salomon. “She’s just like one of my babies, really.”

Stay tuned for the latest Preakness Stakes Odds. Check out the World’s major Racetrack entries and don’t forget to Sign-up and get up to a 10% horse rebate. We offer the best promotions