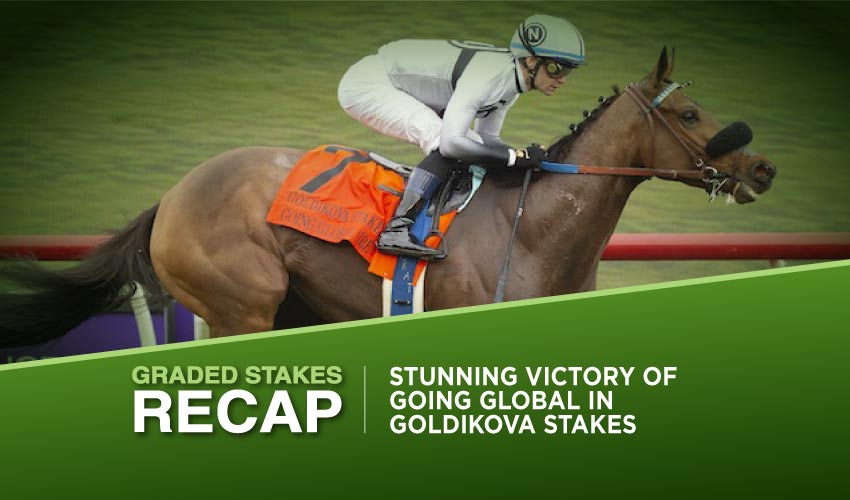 Saturday’s Breeders’ Cup races were preceded by a couple of Grade events attracting exciting participants, while it can’t be said they brought any surprises as the preferred horses scored victories here. At first, Lone Rock smoothly denied Tizamagician in a G2 race for super stayers, upon which Going Global came up with a stunning finish in the closing stages of the Goldikova Stakes, also check Alliance Stakes recap.

In the end, only five horses ran in this G2 race held at the distance of a mile and five furlongs, as two participants scratched from the battle for the purse of $250,000. As the race on the dirt surface didn’t attract any three-year-olds, only older participants clashed here, with Tizamagician (6-5) going for the front at the beginning. Leading the way throughout the race, he was closely followed by his most serious rival, six-year-old gelding Lone Rock, who was at his heels even at the final turn.

Although preferred Tizamagician carried less weight than Lone Rock, soon enough, it was clear he wasn’t going to resist his finish as Lone Rock swung by him, and supported by Ramon Vazquez, he surged for his second G2 win. Crossing the line in 2m 42.61s, Lone Rock only accentuated his superb 2021 campaign as he scored six of all of his seven starts, and this time, the Robertino Diodoro’s charge left the second Tizamagician behind by a length and a half. Unable to challenge the mentioned duo, Cupid’s Claws (57-10) finished third.

It’s also fair to say that Lone Rock lost his only race in 2021 to Locally Owned (48-10), who couldn’t hold a candle to any of his Saturday’s rivals, being also beaten by fourth Hapi Hapi (33-1) and settling for fifth.

The $300,000 G2 race over a mile welcomed a field of eight three-year-old and older fillies and mares, among which Princess Grace (14-5) and Going Global (11-10) were perceived as the leading victory candidates. Princess Grace, trained by Michael Stidham, was quick on her feet and showed the way on the turf surface, while Flavien Prat was patient with Going Global and settled in the midpack.

He urged the three-year-old filly to improve her position in the final turn, so once the field hit the final stretch, the favourite was already charging from third place. The jockey took her outside from where the Philip D’Amato’s bay rallied, passing by both Princess Grace and Zofelle (54-40) and running towards another prestigious triumph. The G1 Del Mar Oaks scorer crossed the wire in 1m 34.57s after she obviously enjoyed herself throughout the whole race, leaving smart Zofelle in second by a length and a half and Princess Grace trailing to third.

Although Princess Grace stayed on the same pace in the last stage of the race, she still held off fourth Abscond (68-10), with fifth Bodhicitta (10-1) being unable to close on them considerably. Warren’s Showtime was also in the mix prior to the race yet was scratched by the connections.