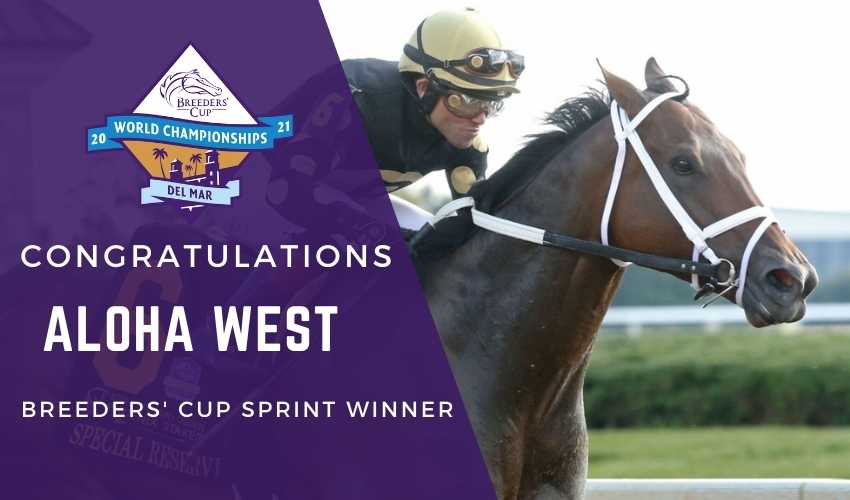 That was very close. Two sizzling speedballs battled to the line in the Breeders’ Cup Sprint and only the camera could separate them after a hectic six furlongs. Under the microscope, Aloha West had the very end of his nose in the right place when the camera clicked and Dr Schivel, who had the race won three strides from the line, two strides from the line, didn’t. That’s racing.

It was another upset result on US racing’s biggest afternoon following Gamine’s eclipse in the opener, with 1-2 shot Jackie’s Warrior expected to add to his glittering roll of honour against seemingly overmatched rivals. The favourite led for a half-mile, but when push came to shove as they reached the top of the lane Jackie’s Warrior had nothing more to give.

Dr Schivel swept smoothly to the lead and looked home for all money, but Aloha West was coming home like a runaway train under Jose Ortiz and made up five lengths through the last sixteenth, getting up to win in the last half of the last jump, stopping the clock in 1:08 and one-half, paying out at $24.60.

The unlucky horse of the race was Following Sea, who went for a gap on the rail at the top of the stretch but found that gap closing before he could get through it. He switched and stayed on gallantly but could only manage third spot. Special Reserve was fourth as Jackie’s Warrior faded, his energy spent after posting very fast early fractions.

It was the first stakes success for Aloha West, whose only previous experience of Graded company had been when runner-up to Special Reserve in the Grade 2 Phoenix Stakes at Keeneland. Trainer Wayne Catalano was claiming his fourth Breeders’ Cup win and his first for ten years.