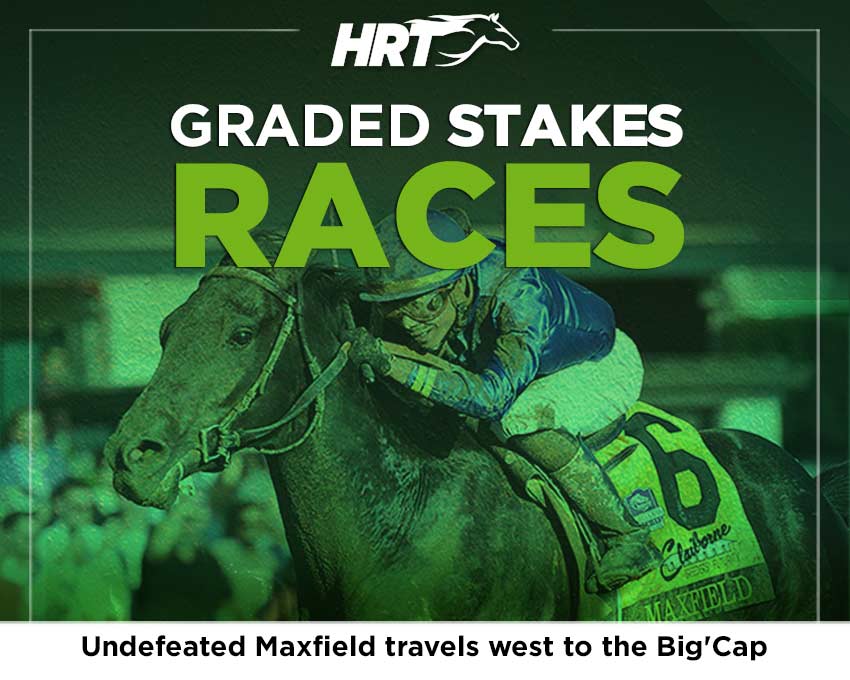 There are multiple America graded stakes races set to run this weekend at tracks like Santa Anita, Tampa Bay Downs, and Aqueduct. There will be three Kentucky Derby qualifying events offering points on a 50-20-10-5 scale to the top four finishers.

Here is a look at some of the top America graded stakes races for the weekend:

One of the most anticipated stakes races of the weekend is the $400,000 Lambholm South Tampa Bay Derby on Saturday. One of the Kentucky Derby qualifiers, the Derby is an important event for those looking to move up on the leaderboard.

The race is open to 3-year-olds and covers a distance of 1 1/16 miles.
The Tampa Bay Derby will feature a showdown between Hall of Fame trainer Bill Mott’s Candy Man Rocket, undefeated winner of the Sam F. Davis Stakes (G3) at the track, and Dale Romans’ Sittin On Go, the Sept. 5 Iroquois Stakes winner.

The field of 12 will also include names like Helium, Hidden Stash, and Boca Boy.

One of the races on the Tampa Bay Derby undercard, the $225,000 Hillsborough Stakes is a graded stakes race for 4-year-old-and-up fillies and mares. The field of 11 will cover a distance of 1 1/8 miles on turf.

The top name going into this one is Magic Attitude, a 4-year-old filly from Galileo trained by Arnaud Delacour. The Great Britain-bred filly has three wins, one second, and two thirds from eight lifetime starts.

She is coming into the Hillsborough following a third-place run in the Queen Elizabeth II Challenge Cup Stakes (G1) on October 10 and a Sept. 19 victory in the Belmont Oaks Invitational Stakes (G1).

Some of the other names among the field include Counterparty Risk and New York Girl.

One of the big graded stakes races on Santa Anita’s Saturday card is the $300,000 San Felipe Stakes for 3-year-olds. One of the Derby qualifying events, it is set to cover 1 1/16 miles with a field of seven.

The smaller field is being led by names like Bob Baffert’s Medina Spirit and Life Is Good. A Protonico colt owned by Zedan Racing Stables, Medina Spirit is coming into the race following a victory in the Jan. 30 Robert B. Lewis Stakes (G3) at the track. He was the runner-up finisher in the Sham Stakes, which was won by Life Is Good.

Some of the other top names in the field include The Great One and Roman Centurian.

The highlight graded stakes race on Santa Anita’s card is the $400,000 Santa Anita Handicap for 4-year-olds and up. Covering 1 1/4 miles, the race will include names like Independence Hall, Maxfield, Tizmagician, and King Guillermo among the solid field of eight.

A Street Sense colt, Maxfield is undefeated in five lifetime races. His most recent performance was a victory in the Feb. 13 Mineshaft Stakes (G3) at Fair Grounds, and his other top wins include the Matt Winn Stakes (G3) and Claiborne Breeders’ Futurity (G1).

The big graded stakes race on the Aqueduct card is the $300,000 Gotham Stakes, another one of the Derby qualifiers. The event covers one mile and is open to 3-year-old runners.

Capo Kane is having a strong 2021 campaign, winning the January 1 Jerome and finishing third in the Feb. 3 Withers Stakes (G3), both at Aqueduct. Freedom Fighter is coming off a second-place run in the Feb. 6 San Vicente (G2).

The field will also include Wipe the Slate, Highly Motivated, and Weyburn.

Make sure to check Horse Racing Tote for the latest Saturday graded stakes racing recaps; news and updated odds on the Road to the Kentucky Derby. Follow us on Social Media for Horse Racing Tote instant updates!