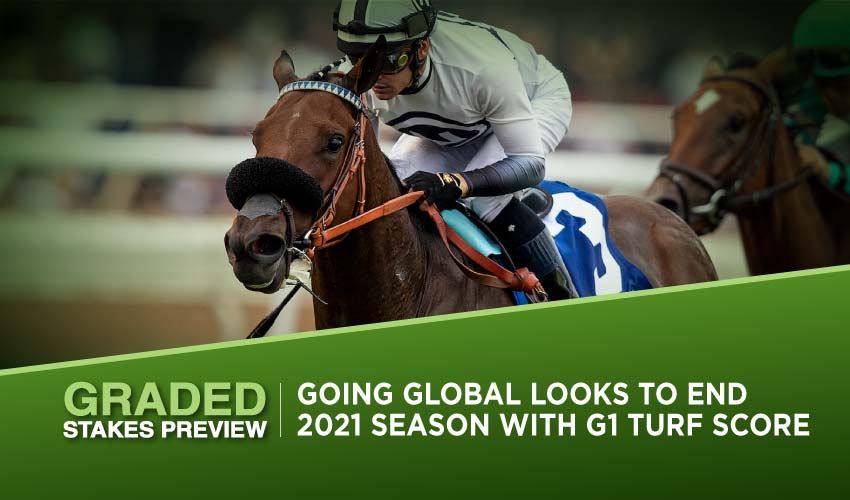 The focus on Boxing Day is firmly at Santa Anita, where the opening day of the meeting features six Graded stakes, three on dirt and three on turf. The turf schedule is headed by the Grade 1 American Oaks, in which fan favourite Going Global bids for her seventh success of the year and her fifth from five starts here, while Beyond Brilliant (Grade 2 Mathis Mile) and Hit The Road (Grade 2 San Gabriel) are other big names to watch out for.

European influence is usually the watchword on the weeds, but that isn’t quite the case in the American Oaks, the turf highlight of the opening day at Santa Anita on Sunday, a late Christmas present for all racefans.

The morning-line favourite Going Global may have begun her career across the water, but she’s an all-American girl now after developing into one of the stars of the year. The Irish-bred is six-for-seven during 2021, with only a half-length defeat robbing her of a perfect season, and she is unbeaten in four at Santa Anita.

Three Grade 3 wins here were followed by more prestigious honours down the coast at Del Mar, with the local Grade 1 Oaks – in which she took down today’s rivals Closing Remarks and Fluffy Socks, plus seventh-placed Ivy League – preceding arguably her lifetime best in the Grade 2 Goldikova, when she finished off her race in dominant fashion to win by a length and a half.

Going Global has never gone beyond the mile-eighth of the Del Mar Oaks, but her running style suggests the extra distance will not be an issue. That goes too for her Phil D’Amato-trained barnmate Burgoo Alley, another ex-Irish filly who made her stakes breakthrough when getting up close home to win the Grade 3 Autumn Miss here over a mile. She is nicely on the upgrade but has plenty to find with her stablemate.

Del Mar Oaks runner-up Closing Remarks has yet to win at Graded level and has finished second to Going Global all three times they’ve met. Board players will be interested but there’s no obvious reason to say she can finally flip the form with the favourite. Three-quarters of a length back in third at Del Mar was Fluffy Socks, who stopped a four-race losing streak when getting up in the last few jumps to win the Grade 2 Sands Point at Belmont Park. Trainer Chad Brown is a whizz with turf runners and she can’t be ignored from her inside post.

Trainer Mike McCarthy puts four in the gate, with the nicest of them being, well, Nicest, who really does bring an important European influence to the table. Her form at a mile and a half in Britain when third in the Group 2 Ribblesdale at Royal Ascot, behind two subsequent Group 1 winners, is very strong indeed, and in two runs Stateside she’s shown that she belongs in this company.

She was fourth in the Grade 1 Queen Elizabeth II Challenge Cup at Keeneland, a head in front of barnmate Queen Goddess, and then third in the Grade 3 Red Carpet at Del Mar, beaten less than a length, with barnmate Single Soul a length behind last of five on her stakes debut. Nicest will expose any weakness in stamina among her rivals and should be fully acclimatised now. The last McCarthy runner is stakes-placed Charges Dropped, who has never won anything better than a maiden.

It will be hard to stop American Oaks favourite Going Global adding to her tremendous record, but at these odds NICEST to show is a very tempting alternative.

Bettors will be looking to get on the Road in the San Gabriel, the opening Graded contest on Sunday’s stakes-heavy card – but which one?

Track specialist Hit The Road is four-for-seven here, but a quick glance at his overall record shows the obstacle that he must overcome today. His last four races have brought him victory in the Grade 1 Frank E Kilroe Mile here, and then defeat in the Grade 1 Maker’s Mark Mile at Keeneland, the Grade 2 Del Mar Mile and most recently the Grade 2 City Of Hope Mile back at this venue. Mile after mile after mile.

It’s all good form, including his last two when beaten by Mo Forza and Smooth Like Strait each time, and with those two top-notchers out of his way his path to victory looks easier, but the extra furlong is an unknown quantity.

The reverse is true for Friar’s Road, who drops back in distance after running third in both the Grade 2 John Henry Turf Championship here over a mile and a quarter and the Grade 2 Hollywood Turf Cup at Del Mar over a mile and a half. He did win his maiden at a mile, but that was on the main track, and the worry is whether he has the speed to figure over this distance on turf at a racecourse where he is zero-for-four.

The most recent San Gabriel runner-up – owing to a quirk of the calendar the race was run in January 2021, so he could be a quiz question in the making – Bob And Jackie has been beaten in all seven of his starts at Graded level and comes here on a nine-race losing streak, with sixth place in the Grade 2 Seabiscuit at Del Mar last time out not prompting too much encouragement.

Six and a half lengths ahead of him in third that day was Indian Peak, a two-time stakes winner who has never got it done at Graded level, and in fourth was Majestic Eagle, who is just three-for-33 lifetime and hasn’t won since June 2019, so the bare form of the Seabiscuit is pretty uninspiring.

Recent winning form belongs to the Phil D’Amato-trained pair Red Storm Risen and Ready Soul, who are both moving back up to Graded company after allowance optional claimer wins last time out. Red Storm Risen was the more impressive, going gate-to-wire to win by four and three-quarter lengths at Del Mar, but he was earlier three and three-quarter lengths behind Hit The Road when fourth in the City Of Hope.

Ready Soul got home by a neck over course and distance, with Red Storm Risen a length back in third, but he had previously been a well-beaten eighth in the John Henry Turf Championship, more than four lengths behind Friar’s Road.

Is a moderate affair for the grade and purse, with a question mark over every horse. HIT THE ROAD has a fine record at Santa Anita and is the selection.

The key to the Mathis Mile is likely to be found among the many Derbys that populate the racing schedules, with a pair of California contests top of the list.

On his stakes debut, in the Grade 2 Twilight Derby over a mile-eighth here in October, Beyond Brilliant put down a marker when finishing third, outrunning today’s rivals Flashiest, Zoffarelli and None Above The Law. He improved considerably on that performance next time out in the Grade 1 Hollywood Derby at Del Mar, again at a mile-eighth, when wiring the field and hanging on gamely in the closing stages to grab the dollars by a neck, again finishing clear of Zoffarelli and Flashiest.

That was a big step up, a little bit through natural improvement and a little bit through those forcing tactics, and Beyond Brilliant figures to be on the lead again over this shorter distance, with only the stakes debutant Cane Creek Road a rival for the speed. Further improvement is likely now he’s found his niche; barnmate Airman broke his maiden over course and distance at the sixth attempt but has been beaten twice since, including in stakes company, and has a six-month layoff to overcome.

Another Derby enters the mix via None Above The Law, who won the Grade 2 version at Del Mar in September by three-quarters of a length from Flashiest, with Zoffarelli (8-1) a never-in-it sixth. None Above The Law is a multiple stakes winner but comes here off two below-par efforts, while Flashiest must bounce back from his dull showing in the Hollywood Derby, and Zoffarelli hasn’t moved on since getting the Grade 3 La Jolla at Del Mar on a disqualification on his first start Stateside after emigrating from Britain.

More Derbys: Du Jour was fourth in the Grade 1 Belmont Derby and third in the Grade 1 Saratoga Derby, but then threw in a stinker when eighth in the Dueling Grounds Derby at Kentucky Downs, although many horses don’t act at that unorthodox circuit. Since then he has returned to Bob Baffert’s barn, where he began his career and won the Grade 2 American Turf over a mile-sixteenth at Churchill Downs in May, and if the move gives him a lift then he’ll have a strong chance.

Another one: Grade 1 Santa Anita Derby fifth Law Professor was a long way back that day and has only won an allowance optional claimer since, although that was last time out after a five-month layoff and he is worth a second glance. Tarantino was beaten in three Graded races at the beginning of the year, but ran third in an allowance at Keeneland last time out, on his first outing for seven months, and should be tighter for that.

If Du Jour regains his zip back at Baffert’s barn he has claims in the Mathis Mile, but BEYOND BRILLIANT is already a Grade 1 winner and is improving in leaps and bounds.

Make sure to stay tuned for the latest Horse Racing odds, Races Results and racing entries. Sign up and get a 10% rebate.