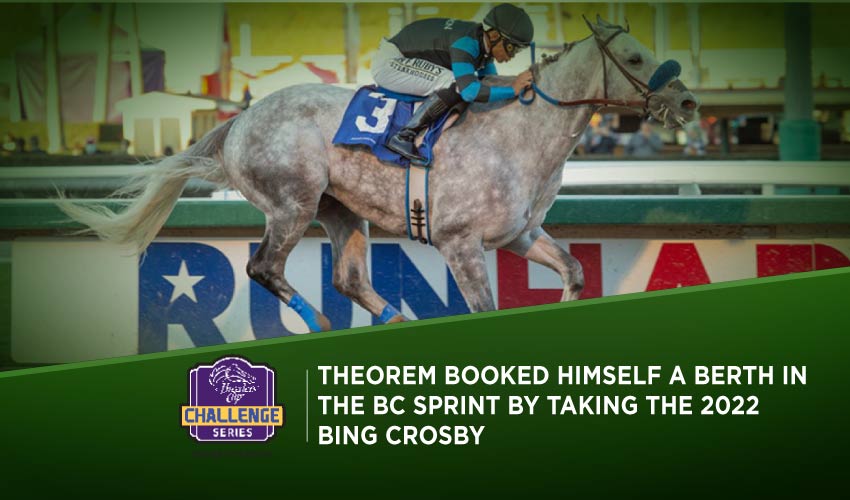 Favorites took a back seat in the Graded stakes at Del Mar over the weekend, with the biggest shock coming in Sunday’s G2 Eddie Read when Master Piece – only in the race after a late scratch – got the job done at 16-1. A day earlier, 7-1 shot American Theorem sealed a place in the Breeders’ Cup Sprint when winning the Win and You’re In G1 Bing Crosby, and 9-1 Royal Ship bounced back to his best to take a classy renewal of the G2 San Diego.

On Friday he wasn’t a runner. On Sunday he was a winner. Master Piece upset the applecart at Del Mar on Sunday, drawing in off the also-eligible list to spring a 16-1 surprise in the feature Eddie Read.

The six-year-old Chilean-bred only got his chance when barnmate There Goes Harvard was scratched, but the striking grey grabbed it with both hands. He raced a long way off the pace set first by Masteroffoxhounds and then by favourite Beyond Brilliant and still had a lot of work to do at the top of the lane, but Abel Cedillo found him some daylight and he soon surged clear for an easy victory, three and a quarter lengths clear of the late-running second-choice Hong Kong Harry.

The runner-up’s barnmate Cathkin Peak closed from last to take the show spot, but Beyond Brilliant faded in the stretch and came home a disappointing sixth. The stopwatch showed 1:46 and one-fifth. There was a pause while the stewards looked into some minor interference between the winner and the runner-up as the horses left the gate, but the result was soon made official.

“He’s a fresh, happy horse down here at Del Mar,” said trainer Michael McCarthy. “His work last week was very good and I knew he would run well. I told Abel he would be rolling late, but that last quarter was pretty impressive.”

Master Piece was snapping a losing streak that stretched back to last April, and making his breakthrough at stakes level in the US after being G1-placed in his native Chile. His next target may be the G2 Del Mar Handicap – a win-and-in for the Breeders’ Cup Turf – over a mile and three-eighths on September 3, in which he was runner-up 12 months ago.

American Theorem booked himself a berth in the Breeders’ Cup Sprint when running out a comfortable winner of the Bing Crosby, the highlight at Del Mar on Saturday.

Both horse and trainer George Papaprodromou were winning for the first time at G1 level, and although the 7-1 chance had to come five wide into the stretch he was always travelling better than those inside him. Joe Bravo even dropped his whip as he set down for the drive but it made no difference, American Theorem was away and gone and drew off to win by a length and a half, stopping the clock in 1:08 and three-fifths.

“I didn’t think I wanted to go that wide, but he just had his momentum up and we just kept on going,” said Bravo. “I dropped my whip and if I was ever nervous, that’s when I got nervous, but it turned out he didn’t need it.”

The late-closing Get Her Number had no chance with the winner but was clear best of the rest, four and a quarter lengths ahead of Letsgetlucky in third. Hot favourite Shaaz was a never-dangerous fourth.

“We’ve always believed in this horse,” said Papaprodromou. “The race turned out the way we planned. We knew with that post [nine] we would have to go a little wide, but it worked out perfectly.”

American Theorem is in the form of his life at the age of five, preceding this victory with success in the G2 Triple Bend at Santa Anita in May, the two best performances of his career. Obviously the BC Sprint, in which he will encounter last year’s champion sprinter Jackie’s Warrior, is now the main end-of-year target, but the grey may have a short break now after this sixth start of 2022.

The South American flavour of the weekend was triggered by the ex-Brazilian Royal Ship, who caused a mild upset at 9-1 when outrunning a deep field for the San Diego.

The Richard Mandella-trained six-year-old sat close to the pace under veteran Mike Smith as second-choice Defunded towed the field along the back stretch, but the leader gave way around the turn and Smith brought Royal Ship four wide to challenge.

They were soon in front, and Royal Ship cleared away down the lane to win by two and a quarter lengths in a time of 1:42 and four-fifths. Dubai World Cup winner and 2-1 favourite Country Grammer had a moment on the bend but then had no answer to Royal Ship’s change of pace. He stayed on over a distance that is too short for him to be runner-up, four and a quarter lengths clear of the frustrating nearly-horse Stilleto Boy.

Last year’s official Kentucky Derby winner Mandaloun has not been at his best since returning from a joyless trip to the Saudi Cup and was a lacklustre fourth.

“I’m learning more about him,” said Smith, who last won the San Diego way back in 2006 aboard Giacomo. “He’s a thinker. I didn’t want to take away anything that came easy to him. Last time the track was deep and he didn’t care for it.”

This was a welcome return to the big time for Royal Ship, a G1 winner in Brazil but zero-for-four at the top level since relocating north. It was his first success at Del Mar on his fifth start at the seaside track, and he is likely to return on September 3 for the headline $1m G1 Pacific Classic over ten furlongs, in which he was only seventh 12 months ago. Country Grammer is also being pointed towards the race.