Another Victory for Newgrange in Southwest Stakes 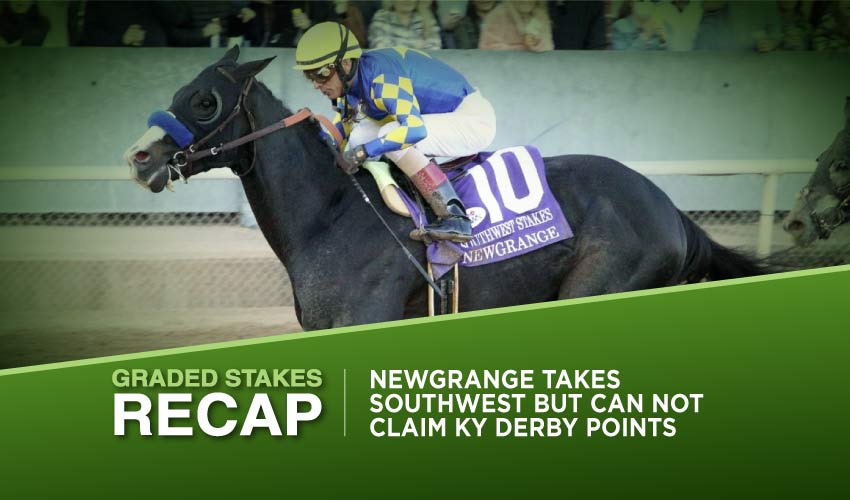 This Weekend’s Horse Racing Recap from around the country

As the previous weekend was packed with high-class action taking place throughout the whole USA, let’s look at some of the exciting races in this article, starting with the G3 Southwest Stakes at the Oaklawn Park – the part of the Road to the Kentucky Derby.

Three-year-old Newgrange maintained his unbeaten record here, running down all of his rivals in a fine style. We’ll also look at the most prestigious races organized at the Sam Houston Racecourse as preferred Pauline’s Pearl won their Sam Houston Ladies Classic, and the John B. Connally Turf Cup witnessed a dead-heat result thanks to Fantasioso and Another Mystery. Friar’s Road then smoothly scored the G2 San Marcos Stakes at Santa Anita Park.

Under normal circumstances, Newgrange (6-4) would earn 10 points for the Road to the Kentucky Derby thanks to his win in Saturday’s Southwest Stakes, the G3 dirt race held at the distance of a mile and a half of a furlong for the purse of $750,000. However, because his trainer Bob Baffert is banned from running his horses in the Churchill Downs, Newgrange indeed maintained his perfect record, still, it’s a question of whether his performances would mean anything towards the Kentucky Derby.

Piloted by John Velazquez, Newgrange had a great start, galloped in third throughout the race, and even though he seemed in trouble in the second turn, he managed to come back in the final stretch. Rallying in the middle of the track, he passed the former leader and scored his third victory out of three starts in 1m 45.83s. Newgrange’s finish occurred in time as two of his rivals also displayed eye-catching turn of feet, resulting in Barber Road (118-10) taking second place, a length and a half behind the winner, and Ben Diesel (5-1) running in third.

The front-running Kavod (138-10) had to settle for fourth, while the second chance of the race, Dash Attach (17-5), for fifth as his effort was slightly disappointing.

The most prestigious race held at the Sam Houston Racecourse was meant for four-year-old fillies and older mares who clashed at the distance of a mile and a half of a furlong for the purse of $400,000. The G3 dirt race saw the victory of four-year-old grey Pauline’s Pearl (3-5), who already had one G3 success under her belt, upon which she performed well at the stage, and as she bagged a Listed win last time out, she was expected to strike gold also in the Sam Houston Ladies Classic.

With Joel Rosario aboard, Pauline’s Pearl travelled close behind the leaders, charged from the outside in the final turn to easily surge for the front. The daughter of Tapit then almost effortlessly drew clear of her rivals to cross the wire in 1m 44.43s with the advantage of 3 and ¾ of a length to second Golden Curl (129-10), who ran a brave race. Audrey’s Time (17-5) took third.

Although the race has favoured trainees of Michael Maker in the most recent years, this time the G3 turf event for four-year-old and older horses saw Maker’s chances trailing in behind, including last year’s runner up in this a mile and a half-long race, Ajourneytofreedom (8-5), who was only sixth on Sunday. In 2022, most of the purse of $200,000 wasn’t earned by one victor but by two as the John Connally Turf Cup was announced to result in a dead-heat.

Fantasioso (94-10) had been showing some fine efforts for his trainer, Ignacio Correas IV, and finally scored his premiere Graded victory together with Another Myster (238-10). Still, it was far from easy for Fantasioso as he had a smooth trip; however, he had to put up a huge fight to prevail even in a dead heat. His finish came in time from the rear of the field, and as he smoothly passed by his rivals from the outside, he faced Strong Tide (7-2), who fought bravely, but he managed to leave him behind by a head, however, Another Mystery then flew from the outside to land the triumph alongside Fantasioso. They crossed the wire in 2m 31.28s ahead of the third Strong Tide as there was a considerable gap between the first trio and the rest of the field.

Mentioned favourite Ajourneytofreedom had some tough luck in the final stretch as he seemed primed to rally forward but he bumped into a barrier of horses, so he just couldn’t get better then sixth here.

Saturday’s G2 race welcomed a field of five four-year-old and older horses on the turf surface and the distance of a mile and a half. The purse of $225,000 was up for grabs here, while the primary victory candidate seemed to be the five-year-old Friar’s Road (11-10) trained by Michael McCarthy. After gathering fine places at the Graded stage, the son of Quality Road aimed to collect his first G2 success as he was simply brilliant in this year’s San Marcos Stakes.

Flavien Prat let the bay gallop in the third place where Friar’s Road remained even when the leading duo pressed the pace in the final turn. Only then the favourite was urged to close on them, and once Friar’s Road hit the final stretch and saw open space in front of him, nobody could’ve stopped him from winning his premiere G2 race in 1m 58.67s.

He quickly drew clear from his rivals to strike gold by four and a ¼ of a length in impressive fashion, suggesting he’s developing into a very good sort, capable of showing up decently even in the G1 company. Bob and Jackie (135-10) finished second after a good run, holding off third Say The Word (23-10).

In the final stretch, the front-running Acclimate (31-10) had nothing to offer and faltered to the last place as even Lincoln Hawk (78-10) passed him by in the closing stages.

Follow us on Social Media for instant Southwest Stakes updates!