Aqueduct over the weekend 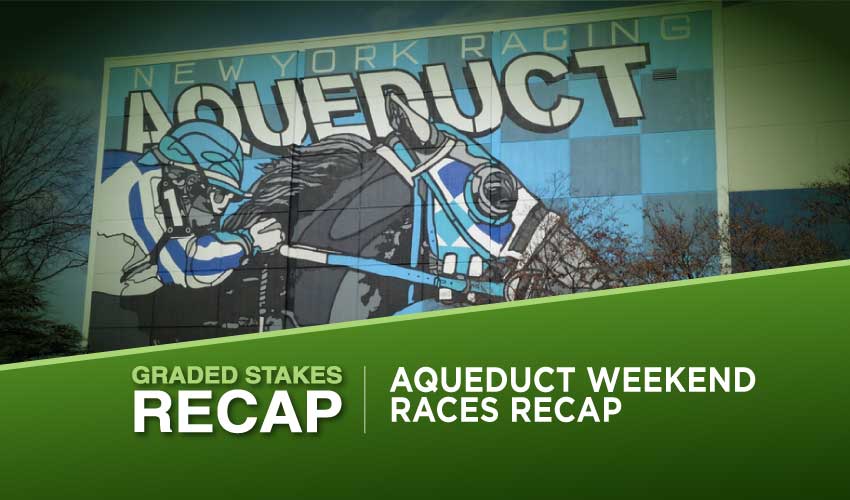 Everybody dreams of hitting the big time in New York, and for two trainers their dreams came true at Aqueduct over the weekend. Michael Catalano and Reeve McGaughey, at opposite ends of their careers, both trained their first Graded winner – Catalano with Hopeful Treasure in the Fall Highweight and McGaughey with Bees And Honey in the Comely. In between, Mutamakina ended her career with a flourish, landing the Long Island for the second year running.

Treasure at last for Catalano

Aqueduct was the place to be at the weekend for trainers moving up in the world, as Michael Catalano became the second to make the breakthrough at Graded level – following Reeve McGaughey – when sending out Hopeful Treasure to win the Fall Highweight on Sunday.

Catalano has been training for a lot longer than McGaughey, having saddled his first runners in 1988, so the success of the 18-1 longshot will have been particularly sweet. Hopeful Treasure, whose sole previous attempt in Graded stakes brought eighth place in last year’s Grade 1 Allen Jerkens at Saratoga, arrived off the back of a win in allowance company but bridged the gap to the higher level in some style.

Mychel Sanchez put the four-year-old just behind the swift fractions of track specialist and joint top-weight Chateau, and although the front-runner still had the call at the eighth pole Hopeful Treasure was finishing off strong. He hit the front with a sixteenth to run and turned back the late thrust of Green Light Go to win by a head, stopping the clock in 1:11 and one-fifth. Chateau faded into third, three and a half lengths back.

“I was always confident,” said Sanchez. “I know him really well, I’ve worked him since he was a baby. I told the trainer and owner that he was going to run his best race. They had him ready.”

Catalano certainly did have him ready, but his breakthrough victory might have been denied by circumstances beyond his control two days earlier, when the gates were closed at his base at Parx Racing owing to a suspected case of equine herpesvirus.

The case tested negative, travel was permitted. Hopeful Treasure went, and came back a winner. It was meant to be.

Mutamakina signs off in style

It was a case of different day, same result for Mutamakina, who defended her title in the feature Long Island at Aqueduct over the weekend, stretching her winning streak to three and ending her career on the track in the perfect way.

Twelve months ago the five-year-old mare won the Long Island by three-quarters of a length, and this time she had even less margin for error, running down long-time leader Candy Flower in the last few strides to score by a half-length. It was a victory that had looked unlikely in mid-stretch, with the longshot Candy Flower clear and still running strongly off steady early fractions, but a mile and a half is a long way and Mutamakina used every inch of it here.

“She’s really determined, I knew she was going to get there,” said jockey Dylan Davis, and he might have been the only one with such confidence, but when Mutamakina starts rolling she is a formidable force and the 2-1 favourite came from a long way back to score, stopping the clock in a tick over 2:28. The gallant Candy Flower had two and a quarter lengths to spare over Mutamakina’s barnmate La Dragontea in third.

“She had a really good year, she’s been important for us,” said trainer Christophe Clement. “This was her last race and she’ll go back to Ireland now and become a broodmare. She’s a very exciting prospect for stud.”

That really good year for Mutamakina included victory in the Grade 1 EP Taylor Stakes at Woodbine on her previous start, along with the Grade 2 Dance Smartly, also at the Toronto track. The daughter of Nathaniel, also sire of the multiple British champion filly Enable, retires as the winner of six of her 17 races, including two victories in France before she shipped to the US.

Honey so sweet for McGaughey

Like father, like son. The McGaughey name is synonymous with big-race success, with Hall of Famer Shug McGaughey having trained many champions, including Easy Goer, Lure and Personal Ensign. Last Friday, Shug’s son Reeve took his first steps along that path, winning his first Graded stakes when Bees And Honey sprang a surprise in the Comely at Aqueduct over the weekend.

The daughter of Union Rags, going further than a mile for the first time, was a 13-1 shot in a field reduced to six by late scratches, having only victory in a Keeneland maiden to her name before the gates opened. She took a wide trip under Jose Lezcano as Played Hard towed them along with dawdling fractions, and moved up to challenge the leader as they exited the turn.

Bees And Honey was soon in front and drew off from the eighth pole, stretching her lead to two and three-quarter lengths at the wire, covering the nine furlongs in 1:54 and two-fifths. Played Hard held on for second, a half-length ahead of the favourite Crazy Beautiful, who could never get involved at the sharp end.

“Every race she’s run, she’s been stronger in the last eighth of a mile,” said a happy McGaughey junior, who pointed to the addition of blinkers as a reason for his filly’s recent improvement. “They’ve focused her a little bit. They’ve got her to be more consistent throughout the race.”

Bees And Honey, who will spend the winter in Florida with McGaughey’s string at Tampa Bay Downs, has hit the board in all her five races, winning two. It was truly a red-letter day for the family as earlier on the card Shug McGaughey landed a double, including the Forever Together Stakes with Flower Point, who was also ridden by Lezcano.

Sign up and get a 10% rebate. Make sure to stay tuned for the latest Horse racing odds, Racing entries and Races results

Follow us on Social Media for instant Aqueduct races updates!