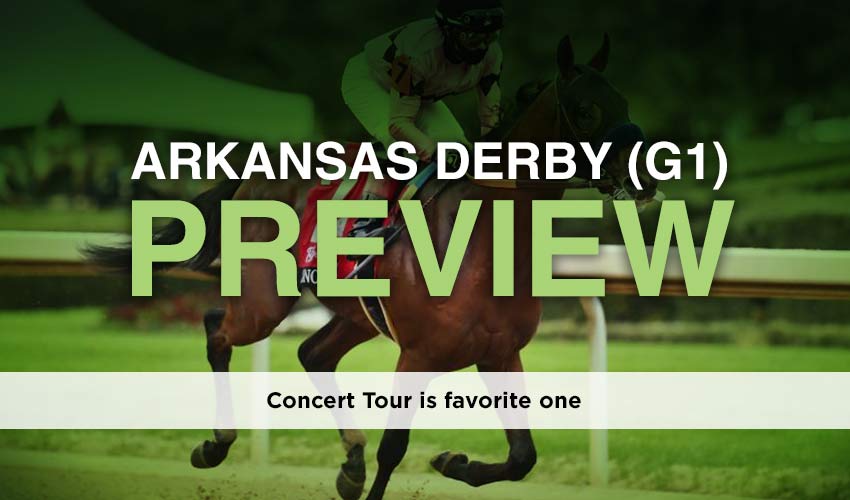 The Grade 1 Arkansas Derby 2021 is the biggest race this weekend, and it will give punters a first look at some of the leading contenders for the Kentucky Derby next month. The Arkansas Derby is run over a distance of nine furlongs at Oaklawn Park.

There have been a number of famous past winners of the race, which have gone on to win legs of the Triple Crown. American Pharoah won the Arkansas Derby on his way to winning all three events, while Smarty Jones and Sunny’s Halo won this race before claiming Kentucky Derby success.

These are the contenders for the Arkansas Derby 2021 edition:

There will be no shortage of quality in regards to contenders on display in this weekend’s Arkansas Derby, but all the attention will firmly be on Concert Tour. The three-year-old is currently the joint-favorite to win the Kentucky Derby next month and has been in exceptional form for trainer Bob Baffert. Concert Tour will be defending his perfect record at Oaklawn Park this weekend, and he was excellent on his most recent run at the same track.

The horse, owned by Gary and Mary West, won the Grade 2 Rebel Stakes by four and a half-length from Hozier. Joel Rosario will be on board once again this weekend, and he rode Nadal to success last year. Concert’s Tour other two wins have come in the Grade 2 San Vicente Stakes and a Maiden Special Weight success at Santa Anita.

Caddo River and Super Stock will be the leading contenders to end Concert Tour’s unbeaten run. However, both have fallen short against the Baffert-trained horse in the past. The Rebel Stakes saw all three involved, with Caddo River finishing fifth and Super Stock finishing in fourth.

Hozier was closer to Concert Tour in the same race but was still four and a quarter lengths behind the winner. The Baffert-trained horse has beaten Hozier on both career starts to this point, and it’s hard to see that form changing this weekend.

Last Samurai, trained by Dallas Stewart, has won once in four career starts. However, he has struggled since being stepped up in class to Group 3. He finished 13 and a half lengths behind Essential Quality in the Southwest Stakes, most recently.

Get Her Number could be an interesting selection and could be a decent chance if he recovers his form from 2020. The Peter Miller-trained horse was eight and a half lengths behind Concert Tour in the Rebel Stakes, but there is definitely room for improvement.

Everything points towards a win for Concert Tour in the Arkansas Derby. Baffert has an excellent record in this race, as he has trained the winner three times in the past ten years.

Concert Tour’s form is solid, and a win this weekend will see him emerge as the outright favorite for the Kentucky Derby. Get Her Number could be an interesting place bet for gamblers, as his run last time out can be scratched off since it was his first start in 168 days.

Follow us on Social Media for instant Arkansas Derby 2021 updates.