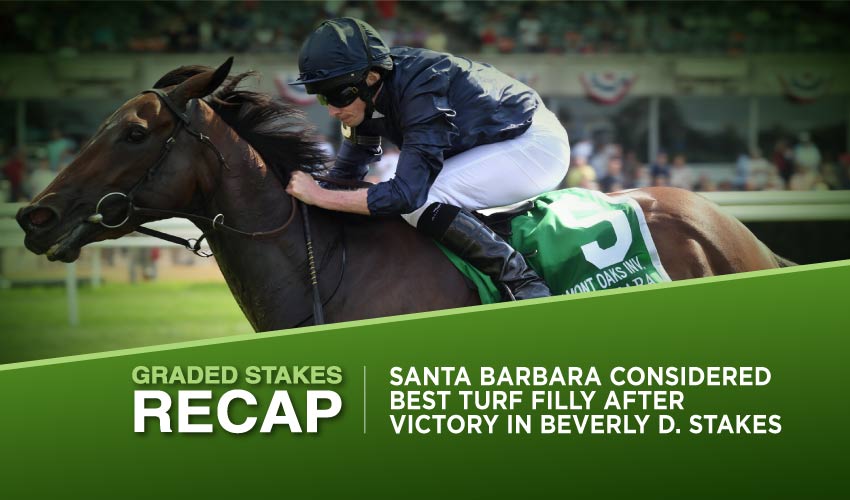 Arlington Final Season, call the cops. Daylight robbery in Northern Illinois on Saturday, in front of thousands of witnesses. Two Emmys and James Graham stole the $600,000 Grade 1 Mr D Stakes – the last hurrah of what used to be the Arlington Million – and got clean away with the loot.

Two Emmys – trained by Hugh Robertson – who had previously run in just two stakes and been beaten in both, led every step of the ten furlongs on turf, initially at a pace so funereal that he seemed to be galloping in slow-motion, finally at a proper rattle, finishing off the final quarter like a superstar. In behind, the other jockeys let Graham do what he wanted, showing no tactical intelligence whatsoever. When you call the cops, tell them the other jocks are accomplices.

The five-year-old gelding, who paid his few supporters at $56.20, covered the distance in 2:03 and a third and got home a neck ahead of hot favourite Domestic Spending, arguably the best turf horse in the US, who sprinted down the lane but came up just short, just too late. Glynn County filled third spot.

“I knew we were going slow,” said Graham. “I knew after the first quarter when I got him to go slow, he’d finish. I thought maybe they were going to jump on me early, but I guess they all bottled themselves up by trying to ride too smart a race.”

The other Graded stakes on the card were more conventional, produced more logical outcomes. Irish raider Santa Barbara now has claims to be considered the best turf filly in the US after her comfortable victory in the $400,000 Grade 1 Beverly D Stakes, over a mile and three-sixteenths.

Santa Barbara (Aidan O’Brien/Ryan Moore) came to Saratoga from victory in the Belmont Oaks and the even-money favourite was even more impressive here, grabbing long-time leader Mean Mary at the eighth pole and drawing away under a hand-ride to win by three lengths, stopping the clock in 1:54 and one-half. Lemista closed late for third, a neck behind Mean Mary.

The three-year-old is a half-sister to two Breeders’ Cup winners in Iridessa and Order Of Australia, and will now return home before making the trip to Del Mar for the Filly & Mare Turf in November.

Point Me By justified favouritism in the $300,000 Grade 1 Bruce D Stakes over the turf mile, coming from mid-division on the turn under Luis Saez and keeping on strongly in the lane, seeing off Tango Tango Tango and Ginsburned by two and three-quarter lengths and a nose. The three-year-old, trained by Eddie Kenneally, stopped the clock in 1:37 and change and paid out at $5.40.

Chad Brown, the chief victim of the Mr D felony, did at least go home with something to show for the day when his Shantisara gained her first success Stateside in the $100,000 Grade 3 Pucker Up Stakes, for three-year-old fillies on turf.

Flavien Prat brought Shantisara ($5.60 at the windows) through horses at the top of the stretch and drove home to win by three lengths from Oyster Box, in a tick under 1:52 for the nine furlongs. Flown was third, beaten a further two lengths.

Make sure to check Horse Racing Tote for all the latest horse news; weekend race results, graded stakes, Horse racing entries and so much more.