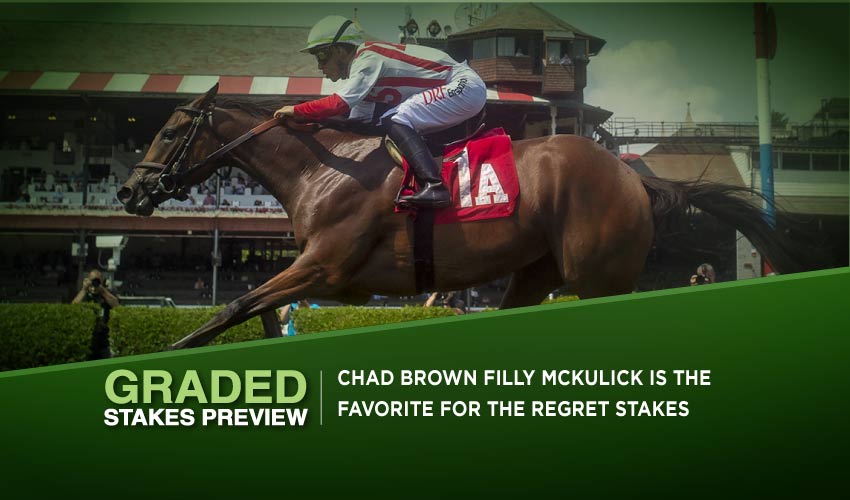 Turf is the surface of choice for the Graded-stakes action at Churchill Downs on Saturday, with the pick of the afternoon the G3 Regret Stakes, which showcases another Chad Brown-trained potential distaff star in the lightly raced McKulick. Later, the G3 Arlington brings together some familiar names, with Field Pass and Get Smokin taking on the up-and-coming Floriform.

The Regret – named for the first filly to win the Kentucky Derby, back in 1915 – is the highlight at Churchill Downs on Saturday, and as ever with distaffers on turf the place to start is Chad Brown, who has an exemplary record in this sector.

Brown is not just a turf trainer – Early Voting, Zandon and Jack Christopher, just in the last few weeks, illustrate that perfectly – but he excels on the weeds and has any number of star fillies and mares, with McKulick given her chance to move up the barn pecking order here.

With just three runs under her belt she has plenty of scope for improvement, and gave notice that her time was not far away when runner-up in the G2 Edgewood here over a mile-sixteenth four weeks ago. She closed strongly but could never get to the winner, beaten two and three-quarter lengths, and it was a strong showing off a seven-month layoff plus she was well clear of the third horse.

She’ll be sharper now and will have plenty of pace to run at, and should confirm the Edgewood form with longshot fourth and fellow closer Kneesnhips, beaten five lengths there and off the board in all four starts at Graded level, two of them here under the twin spires.

Plenty of that aforementioned pace will come from Beside Herself, who led at every call when winning a Keeneland allowance over a mile and three-sixteenths in late April, stretching out in good style. That was just what the doctor ordered after her slightly flat sixth in the G3 Herecomesthebride over a mile at Gulfstream Park in March, and the extra yardage at Keeneland was likely the key to that improved performance.

The slight cutback today shouldn’t pose a problem, although she may get hooked up on the front end with stakes debutante Lola Flo, who went gate-to-wire in a Belmont Park claimer over a mile despite fighting her rider through the early going. Lola Flo may affect the shape of the race but doesn’t have the class – two-for-15, both claiming – to make her pace stick.

Kentucky Oaks ninth Candy Raid is back on turf now, a surface she has shown little aptitude for in two starts in minor company, finishing seventh and ninth. She was impressive when winning a stakes on the synthetic at Turfway Park, upsetting the field at 52-1, but the runner-up was well beaten in the Edgewood and it’s uninspiring form.

Stakes debutante Walkathon is on a roll with two recent wins, taking an allowance optional claimer over a mile-sixteenth here three weeks ago. She is certainly improving and should go well despite the hike in class.

The form of the Edgewood at this track points squarely to McKULICK, who will be assisted by the likely fast pace and has any amount of improvement in reserve.

A reminder of a much-loved and sadly lost racecourse comes with the first running of the Arlington at Churchill Downs, its new home after the closure last year of the Chicago circuit that shared its name.

The only one of the four trainers involved today to win the contest in its old incarnation is Mike Maker, who saddles the veteran Field Pass. The seven-year-old has proved he isn’t a G1 horse, so this is a much more realistic opportunity for him to return to the winner’s circle.

Last year he was at his best from late summer onwards, winning the G3 Baltimore/Washington International Turf Cup at Pimlico, missing out on the G2 Knickerbocker at Belmont Park by a head, and then running arguably the race of his life in the G2 Seabiscuit at Del Mar, where he fought hard to get the job done by a head. He was never sighted in the G1 Pegasus World Cup Turf – he’s not a G1 horse – but showed enough when third in a mile stakes at Laurel Park last time to suggest he still possesses that vital spark.

The experiment of trying Get Smokin as a sprinter failed miserably when he was last of 16 in the G1 Al Quoz Sprint at Meydan in March, a peculiar decision given his solid and consistent form at around a mile. On his previous start he was runner-up to Shirl’s Speight – a G1 winner next time – in the G3 Tampa Bay when bidding to make all, with Floriform a half-length back in third after pressing the pace throughout.

There may again be little between the pair, although Floriform has since won a mile-sixteenth allowance at Keeneland and is a slow-burner typical of his trainer, winning three of his last five starts with further improvement to be expected.

Get Smokin’s barnmate Like The King is riding a six-race losing streak since winning the G3 Jeff Ruby Steaks on the Turfway Park synthetic 14 months ago, and turned in a lacklustre display when fifth in a Keeneland allowance on his first start of 2022. He can do better, but needs to start proving that.

Brian Lynch rolls the dice with two contenders, with Gray’s Fable the more likely after winning his first race for more than a year when wiring the field in a stakes here over a mile. He’s happiest when on the lead and may get that chance today. His barnmate Admission Office has been off the track for 15 months, during which time he has been gelded, an unusual move at his age, and there’s no guarantee he can recover his smart form of 2020 when he won the G3 Louisville here over a mile and a half.

This is a much more suitable assignment for the consistent GET SMOKIN after his G1 sprint failure in Meydan, and he is the choice to rebound to winning form.