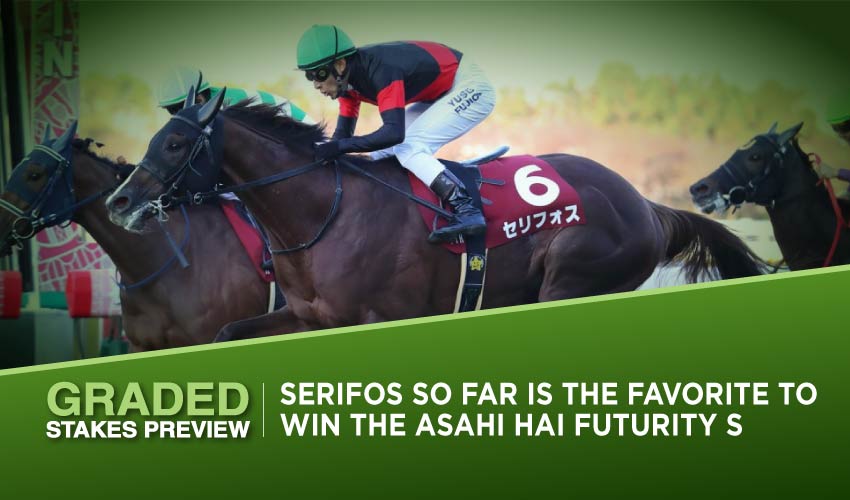 As we previously focused on an unofficial pinnacle of the Japanese season for two-year-old fillies, on Sunday, we are about to witness a possible victory of a new champion among two-year-old colts in the G1 Asahi Hai Futurity S. One filly is indeed in the field, yet the position of the favourite currently belongs to G2 winning Serifos, with Geoglyph looking like his most serious rival.

The G1 turf event with the purse of 135,580,000 Yen attracted the field of 15 two-year-olds who about to cover a mile distance. As the race is perceived as the season’s pinnacle for the juniors, some of the horses travelling to Hanshin have already made names for themselves, including Mitsumasa Nakauchida trained Serifos. The chestnut son of Daiwa Major is unbeaten in all three of his starts as after a successful debut; he struck gold also among the G3 company in the Niigata Nisai Stakes, upon which Serifos was pointed to the G2 Daily Hai Nisai Stakes in Hashin. Piloted by Cristian Demuro, he handled the race brilliantly.

Trailing quite far away from the front, he relaxed throughout the initial part of the race; however, once he was asked to move forward, Serifos enthusiastically complied, rallying ahead in the final stretch to just score the race. A similar tactic is expected of him to employ also on Sunday; still, it’s true his turn of foot isn’t that explosive, so if his finish isn’t timed properly, he might come short. On the other hand, none of his rivals has shown such a class yet, so Serifos is a justified favourite of the Asahi Hai Futurity S, while Toshin Macau is the only contender who has run in the G2 company as well. The Mizuki Takayanagi bound colt took second place back then at the distance of 7 furlongs.

Still, Geoglyph seems to embody the main challenge for the favourite, given he’s got Christophe Lemaire aboard and scored a G3 victory last time out. Trained by Tetsuya Kimura, the chestnut colt bagged both his debut and his second start, the G3 Sapporo Nisai Stakes held at the distance of a mile and a furlong, where he was simply impressive. Like Serifos, Geoglyph also commenced the race at the back at the field, but smoothly improved his position throughout the race, so that he turned for home in third.

After that, he effortlessly seized the front and galloped home unchallenged. Although he’s about to face Serifos together with some other interesting juniors here, Geoglyph certainly looks like a champion in the making. In terms of the placing contenders, we should mention a duo of Listed winners, Danon Scorpion and Do Deuce , and Purpur Ray as well, even though his performance was disappointing in the G2 Daily Hai Nisai Stakes, running only in fourth. Still, with Mirco Demuro aboard, he shouldn’t be entirely overlooked.

Our betting pick for the Asahi Hai Futurity Stakes is Geoglyph, as he seems more apt to show off another spurt of speed in the final stretch, while Serifos is more of a brutal force than an athlete, which might prove a disadvantage here.