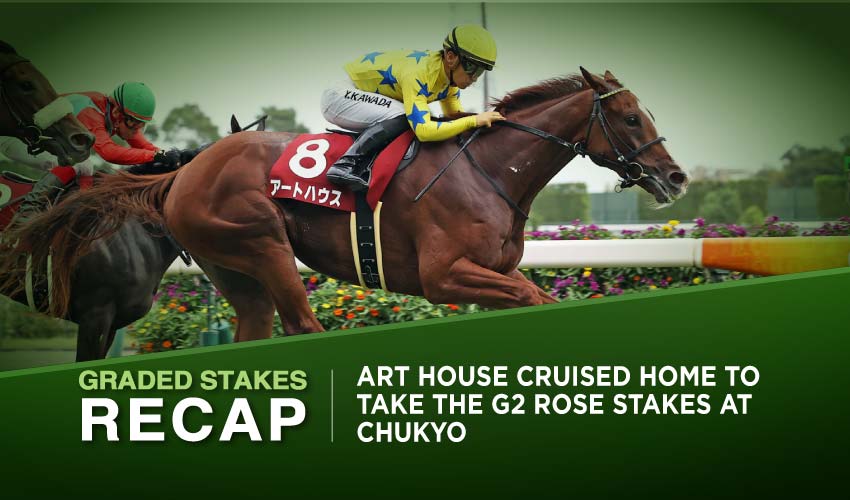 Two most appealing G2 races were held on the Japanese tracks during the previous days; both open only to three-year-olds. On Sunday, fillies lined up for the Rose Stakes at the Chukyo Racecourse, where chestnut Art House fulfilled the role of a favorite when resisting her rivals’ finish. On Monday, Ask Victor More surprisingly succumbed to Gaia Force in the Asahi Hai St. Lite Kinen at the Nakayama Racecourse.

Three-year-old fillies clashed in this G2 race over a mile and a quarter, where they fought for the purse of 100,420,000 Yen. On the turf surface, Art House (17-10) seized the role of a favourite, and after having a good start, she settled in fifth.

Piloted by Yuga Kawada, the chestnut galloped there until the final stretch when she rallied forward, quickly took command, and cruised home towards her premiere G2 triumph. The Mitsumasa Nakauchida bound filly scored the race by a length in 1m 58.50s, leaving Saliera (3-1) in second and Eglantyne (181-10) in third.

Art House has been showing some talent since her last year’s maiden victory, and even though she failed to shine in her second outings, she bagged a Listed win in 2022; moreover, her performance in the Japanese Oaks was a solid one. She finished sixth; therefore, Art House was expected here to play a significant role, which she did, and she held onto the first place until the wire, even though a couple of her rivals was closing on.

Saliera navigated successfully through the field to deliver a nice finish and take second place, with Eglantyne showing a good turn of foot. La Ruelle (74-10) weakened to fourth in front of fifth Memory Raison (149-10).

The purse of 104,800,000 Yen attracted a field of thirteen three-year-olds who competed in this G2 race over a mile and three furlongs. On the turf surface, the Japanese Derby contender Ask Victor More (8-5) started off as a favourite, settled near the lead, and took command in the final stretch; however, Gaia Force (41-10) simply showed a more powerful turn of foot. The grey colt, trained by Haruki Sugiyama, outran Ask Victor More to score the race by a head in 2m 11.80s, with Rousham Park (39-10) running in third.

After winning a Classic trial and delivering bold runs in the Japanese 2000 Guineas and Japanese Derby, Ask Victor More was the clear leading chance here. Even though he gave a good run, his finish just wasn’t powerful enough in the closing stages.

Gaia Force was galloping in the midfield, and piloted by Kohei Matsuyama, he rallied forward on the outside in the final stretch, briefly fought with the favorite, but quite smoothly managed to leave him behind. For Gaia Force, it was his premiere Graded success as until Monday; he was only a maiden victor who placed in a Stakes event. Rousham Park secured third place behind the mentioned pair, with Seiun Hades (269-10) taking fourth and Lagulf (132-10) fifth.