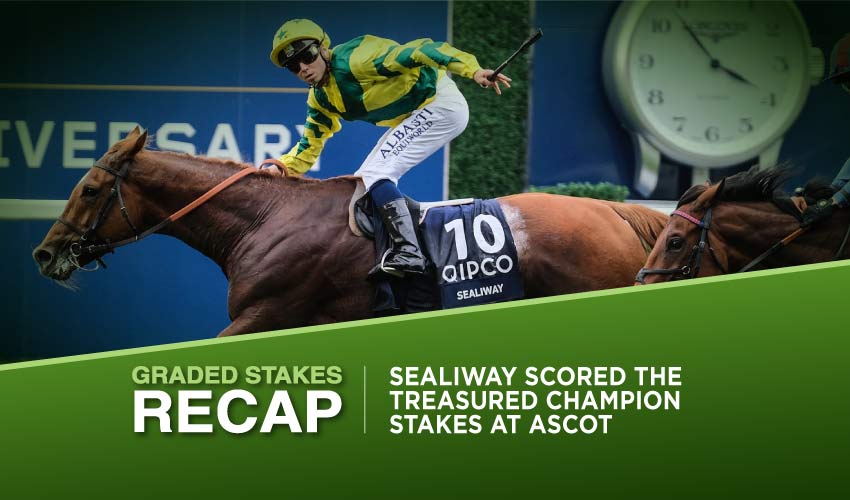 The British flat season has ended. The last prestigious meeting was held on Saturday, while the good to soft ground brought about some surprising Ascot racing results as the pinnacle of the day, the G1 Champion Stakes, went to France thanks to Sealiway, who easily defeated favorites Mishriff and Adayar.

Jockey Jim Crowley had a brilliant day at Ascot, scoring two G1 races thanks to Baaeed and Eshaada, and even though William Buick also bagged a G1 victory on the day, the Champion Jockey title escaped him once more. For the third time in the row, Oisin Murphy was crowned the champion, yet some challenges regarding his problems with addictive substances are still ahead of him.

The finale of the British series for super stayers was held at the distance of two miles with the purse of £500,000, while the favorite was crystal clear – five-year-old Trueshan (EvensF) trained by Alan King. The bay gelding won the last edition of the G2 turf race aboard with Hollie Doyle, who was absent when Trueshan scored the Prix du Cardan, but she was back in time to pilot him among the field of three-year-old and older horses towards his fourth G1 victory by 1 and ½ of a length.

Trueshan was quick of his feet, but the jockey took him back and hid behind the rivals so her mount could rest and relax. She then urged him forward in the last turn, which resulted in Trueshan going wide, but it didn’t matter in the end. The favorite charged for the lead, and while some of the other participants were successfully closing on him, Trueshan maintained a certain advantage over them and crossed the wire in 3m 30.68s. The second chance, Stradivarius (7-2), again performed a gallant effort when finishing from the rear of the field, and in the final stretch, he was gradually getting closer to Trueshan but had to settle for third in the end as second Tashkhan (50-1) fought hard as well.

While Hollie Doyle was beaming with joy after the victory, Frankie Dettori wasn’t satisfied with the ride at all as he felt he had every chance to win. However, when he pulled the chestnut horse outside to make a move, Baron Samedi (9-1) next to him kept forcing him wide. It didn’t take long before Stradivarius got rid of him; still, it might’ve cost the popular stayer second place. It must’ve been rather unpleasant for Dettori knowing that it may’ve been Stradivarius’ last race, given he’s a seven-year-old, but anything official is yet to be announced. Mentioned Baron Samedi took home the last money for sixth place as another duo finished in front of him – Hamish (11-2) and Master of Reality (80-1)

Creative Force (11-2) has finally done it and displayed he doesn’t lack any ability to strike gold at the G1 level as he succeeded in this turf race over six furlongs by a length. As the purse of £500,000 attracted the field of 20 sprinters, the event for three-year-old and older horses was expected to feature some eye-catching performances from the three-year-old participants. Still, Creative Force trained by Charlie Appleby was simply superb.

Running closely behind the leader, the Godolphin chestnut seemed only waiting for William Buick’s question, and when he received one, Creative Force answered with a burst of speed. Leaving the leader, Glen Shiel (22-1), behind easily, he cruised for home with still plenty to offer and crossed the finish line in 1m 13.79s. After showing the way from the beginning, seven-year-old Glen Shiel once again showed he adores this race, which he won last year, and despite the fact, his season 2021 was a bit underwhelming, his Saturday’s effort was brilliant. Preferred Art Power (3-1) was finishing from the outside, and even though he was too late to grab the first two places, he lost the third only by a head to Minzaal (16-1).

Creative Force has always seemed to be a smart sprinter, yet both his previous G1 outings didn’t result in success due to firm ground. However, on Saturday, the chestnut was granted with good to soft on which he prevailed easily and suggested he really should be taken into account in terms of future elite sprint races. All of the first four finishers are decent sprinters, to which fifth Vadream (16-1) joined after she hinted at her abilities throughout summer. Another duo of considered three-year-olds, Dragon Symbol (7-1) and Rohaan (5-1), simply didn’t fire on that day, which their long, challenging campaigns could excuse.

One of the big surprises of Saturday’s G1 races happened among three-year-old and older fillies and mares as the dominant G1 Epsom Oaks winner Snowfall (8-11) couldn’t keep up with some of her rivals again, finishing third. The £500,000 turf race held at the distance of a mile and a half found its pace-setter in La Joconde (28-1) who should’ve helped Snowfall to return to winning ways, but in the end, she helped Eshaada (16-1) trained by Roger Varian.

Jim Crowley had her galloping in the third place, turned for home in full chances, upon which they went for the lead. That was the easy part as three-year-old Eshaada had to keep finding more and more to hold off finishing Albaflora (3-1). Still, probably also thanks to the weight advantage, she maintained the narrow lead to the finish line. Crossing the wire in 2m 34.05s, Eshaada achieved her first G1 victory ahead of Albaflora, who confirmed to be an elite performer this year, while Snowfall couldn’t outrun the mentioned duo. At first, Ryan Moore had her closing the gap as she was finishing from the rear, but she went stiff before the final stage came and stayed in third place.

While Albaflora was the most dangerous rival for the favorite, Eshaada definitely wasn’t because she achieved her only win in a Listed company. Even though she was second in the G2 Ribblesdale Stakes, she was last in the G1 Yorkshire Oaks then. After she lost by 37 lights to Snowfall, it was simply hard to imagine her turning the tables on Snowfall, yet, her form culminated on the right occasion.

The G1 turf race over a mile offered a mouth-watering clash of two outstanding horses, while most of the purse of £1,100,000 was supposed to go to the teams of either Palace Pier (6-4) or Baaeed (2-1). In the end, the duo of favorites traveled sweetly throughout the race for three-year-old and older horses, and when it came to the final stage, both were digging hard.

Four-year-old Palace Pier at the barrier strived to prolong his remarkable season, in which he was unbeaten; however, three-year-old Baaeed ran him down by a neck. Unbeaten in his six starts, the William Haggas colt galloped on the outside of the field, and as multiple G1 winner Palace Pier surged forward, Baaeed followed him closely until he used the weight advantage perfectly to score the race in 1m 42.57s. The Queen Elizabeth II Stakes proved to be mainly about the mentioned duo; the rest of it was quite open, which Lady Bowthorpe (40-1) confirmed when beating some of the more preferred rivals to grab the third place.

While Palace Pier developed into the best older mile in 2021, Baaeed was gradually showing off his talent from smaller races to the G1 level as he bagged the G1 Prix du Moulin at first. On Saturday, he added another prestigious event. Jim Crowley had a lovely ride on him by no means; moreover, it seems we could see more of Baaeed’s exploits in the next season. Third Lady Bowthorpe cemented her position among the elite as she managed to leave last year’s winner, The Revenant (13-2) behind by a length, while Mother Earth (33-1) didn’t disappoint at all when taking the fifth.

The most shocking result of Saturday’s Grade race came in the last big race for three-year-old and older horses regarding British flat season. The G1 turf race over a mile and a quarter offered the purse of £1,200,000, while the leading chances simply couldn’t match the zeal Sealiway (12-1) traveled to Ascot with and gamely scored the treasured race.

The three-year-old chestnut trained by Cedric Rossi finished fifth in the Prix de l’Arc de Triomphe as the best of French horses. However, his class didn’t match the ones of Mishriff (13-8) and Adayar (5-2), who finished fourth in France. Still, Sealiway traveled smoothly in fourth place, and once the field was about to turn for home, Mickael Barzalona urged his mount to get to a better position.

Sealiway was already second when the field arrived at the final stretch, so when he left front-running Adayar behind, he only had to hold off the upcoming challengers. However, none of them outran the French raider even though Mishriff tried hard, and Dubawi Legend (6-1) flew home from the back of the pack. Sealiway managed to score his second G1 race, though, in 2m 8.31s by ¾ of a length. Irish 2000 Guineas winner Mac Swiney (40-1) ran in third.

Although Sealiway’s success was surprising, a French horse winning on the Champion Stakes’ day definitely wasn’t. The soft autumn ground has always played to their advantage, including Sealiway, whose first G1 victory also happened in October when he bagged last year’s Prix Jean-Luc Lagardere on a heavy surface. Behind Dubawi Legend and Mac Swiney, preferred Mishriff finished in fourth and probably closed off his career with not so exciting result, while the Epsom Derby winner Adayar grabbed the fifth.

Join us at JazzSports and make sure to stay tuned for the latest Ascot racing results, odds, and racing entries.