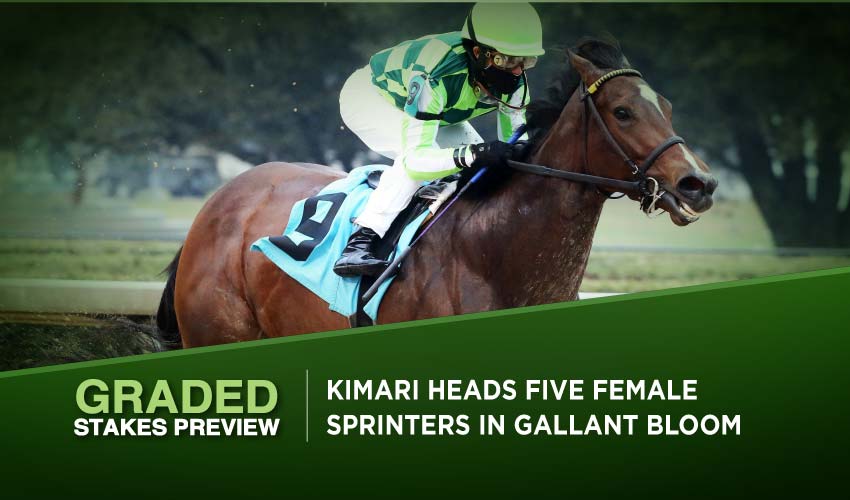 Distaffers are to the fore this weekend at Aqueduct – or Belmont at the Big A, as the NYRA marketing department would have it. Chad Brown could have a lock on the G3 Athenia on Saturday with turf routers Kalifornia Queen and Love And Thunder, and the following day it’s the turn of the main-track sprinters, led by Kimari and Lady Rocket, in the G2 Gallant Bloom

Sometimes it pays to NOT think outside the box, and the Athenia at Aqueduct on Saturday, the feature event despite only attracting a short field, is a good example of that angle.

New York native Chad Brown has won the Athenia a record six times, has won five of the last six, and is practically a lock to take it away again with two of the five runners including the morning-line favourite. His pair aren’t the best of what is an outstanding group of distaffers in the barn, but they’re still pretty good.

The odds-maker’s choice is Kalifornia Queen (6-5), who comes here off an 11-month layoff since running third in the G1 EP Taylor at Woodbine over ten furlongs, when she tried to go wire-to-wire but was nailed at the sixteenth pole and beaten two necks. She was allowed a soft lead there, a departure from her usual stalking tactics, and she could again get her own way out front with so few rivals to harry her.

A long layoff is not normally a problem with this barn and she has a class edge over stablemate Love And Thunder (5-2), who is zero-for-six at stakes level but that’s not all her fault. On her most recent start, in a mile stakes at Saratoga, she had no daylight when full of running in mid-stretch and could only get out when the race was done, finishing well for third, beaten a length and a half.

She has never stretched out this far – she’s been a mile-sixteenth, but her best has been at a mile – and will be coming for her barnmate late, as long as her stamina holds out.

Last October she finished a length behind In A Hurry (5-2) when they ran four-five in the G3 Noble Damsel over a mile at Belmont Park, neither filly playing much of a part in the contest.

In A Hurry then ran up a six-race losing streak before snapping it at Pimlico over a mile-eighth last time, making her stakes breakthrough when allowed to dawdle along on the lead before digging in late to score, although she won’t be allowed that privilege this time.

Stakes debutante Evvie Jets (5-1) is one-for-three at the Big A and has been in good form of late, winning an allowance optional claimer at Belmont before coming off second-best in another AOC at Saratoga, doing her best work late over a mile with the inconsistent Tass (12-1) fading to finish last after pressing the pace to past halfway. Tass won a minor stakes at Colonial Downs last time but this could be a culture shock for both horses.

Chad Brown has the key to this and KALIFORNIA QUEEN, whose long layoff is only a minor concern, can make her class count.

Sunday’s highlight at the Big A is the Gallant Bloom, which has drawn an identically short field to the Athenia and looks even more of a match-race – if a mighty intriguing one – than that contest.

Both the big names are models of consistency, with Kimari (4-5) eight-for-15 and coming off a high-quality performance in the six-furlong G2 Honorable Miss at Saratoga in July, when she duked it out down the stretch with the tenacious Frank’s Rockette and came out on top by a half-length.

That was a classy way to bounce back from a flat fifth in the G1 Derby City Distaff at Churchill Downs, and her victory in last year’s G1 Madison at Keeneland, a stalk-and-pounce score that didn’t fully display her superiority, gives her a class edge that her main rival can’t match. This intermediate distance should be ideal.

Twelve months ago Lady Rocket (2-1), seven-for-15, was runner-up in the Gallant Bloom when it was staged at its usual home Belmont Park. She has a 100 per cent record at Aqueduct, going gate-to-wire and romping by nine lengths in the G3 Go For Wand here over a mile last December, and used those tactics to best effect again when going all the way in the seven-furlong G3 Chicago at Churchill Downs in June.

There’s always a ‘but’, though. She was a length and a half behind Kimari when they ran three-four in the G1 Madison at Keeneland in April, her trailblazing tactics not enough that time, and comes here off an uncharacteristically poor show in the G1 Ballerina at Saratoga, when she couldn’t lead and came home a weary sixth. She has something to prove now.

It’s quite a steep drop back to the others. Remain Anonymous (7-2) produced a career-best last time out when making her stakes breakthrough at Parx Racing, clearing right away to win by five and three-quarter lengths over six furlongs. She needs another career-best to even get in the mix today, but she’s going the right way.

Sterling Silver (12-1) won a stakes over course and distance in January but couldn’t then cope with the demands of the Road to the Kentucky Oaks trail. Her fourth place in the G1 Test at Saratoga looks fine on paper but she was never a factor and beaten 11 and a half lengths, although her performance when a neck behind Wicked Halo in the G2 Prioress back at the Spa gives her a puncher’s chance here, although her patient tactics may not play well.

The Chilean filly Cheetara (12-1) won a stakes over today’s distance at Hawthorne in June, but has been below that level in her last two starts and may struggle.

Lady Rocket needs to rebound and the better option is KIMARI, a G1 winner who will be suited by having plenty of pace to run at.