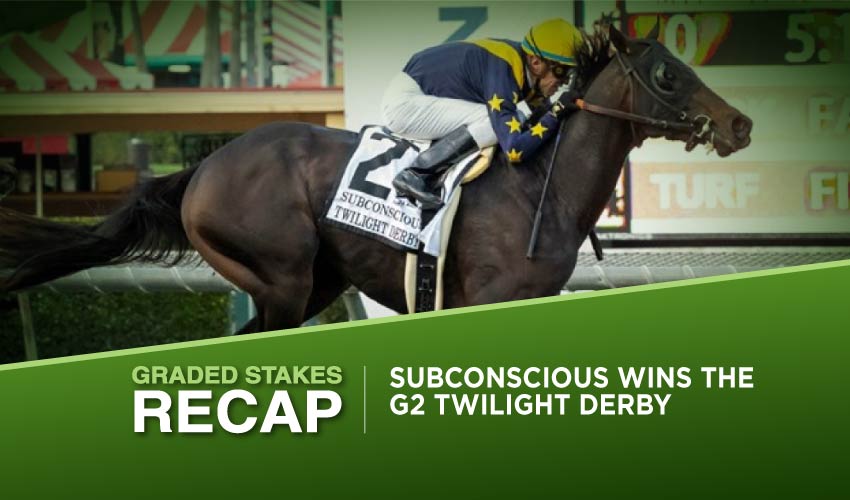 The past weekend at Santa Anita Park brought some high-action cards, featuring primarily a couple of Grade races where two promising three-year-olds showed their potential. At first, Burgoo Alley ran down all of her rivals in the G3 Autumn Miss, beating also more preferred participants, upon which Rock Your World disappointed in his return to the turf surface and didn’t play a huge role when Subconscious struck gold in the Twilight Derby.

The fast pace in this G3 turf race for three-year-old fillies didn’t pay off to the leader as Burgoo Alley (53-10) scored the win from behind. At the distance of a mile, eight participants strived to seize most of the purse of $100,000 with three considered contestants aiming at the front from the start; however, Umberto Rispoli just waited with his mouth trained by Philip D’Amato at the rear of the field.

Last time out finishing third in a Listed, Burgoo Alley was expected to run well again and snatch a fine place, and when the field was turning home, the chestnut filly was raring to be unleashed. In the final stretch, she had enough space to charge forward, which she did, and fighting then with Spanish Loveaffair (29-10), she just won her first Grade race by half of a length in 1m 34.37s

After following the leader, Spanish Loveaffair took command in the final stretch but couldn’t come up with a sufficient answer to Burgoo Alley and had to settle for second place, with Javanica (149-10) finishing in third.

The other two supported fillies had no say in the final fight as Zero Tolerance (39-10) weakened considerably in the final stage and was fourth, while Madone (9-2) put on another underwhelming performance when managing only 7th.

In the end, it was progressive Subconscious (29-10) led by Juan Hernandez, who was hugely supported prior the G2 race for three-year-olds and completed a hat trick when bagging this event at the distance of a mile and a furlong.

With the purse of $200,000 up for grabs, mainly Santa Anita Derby winner Rock Your World (13-10) was taken into consideration, yet after showing the way, he was utterly empty in the final turn and finished one but last. In his only sixth start, Subconscious trained by Richard E. Mandella stalked him throughout the whole event, and as the leader was weakening, the gelding took over and quite easily held off all of his rivals.

It seems the bay could have a promising future in front of him as he left second Cathkin Peak (26-1) behind by a length and a quarter in 1m 47.00s. Beyond Brilliant (109-10) looked the one to threaten the subsequent victor in the final stretch, but as the finish line was getting close, the colt was grew tired and had to settle for third.

Besides Rock Your World, None Above The Law (129-10) was disappointing as well when never being a factor, which also applies to an emphatic winner of the G3 New Kent Virginia Derby, Wootton Asset (204-10), who finished last.

Follow us on Social Media for instant Santa Anita updates!