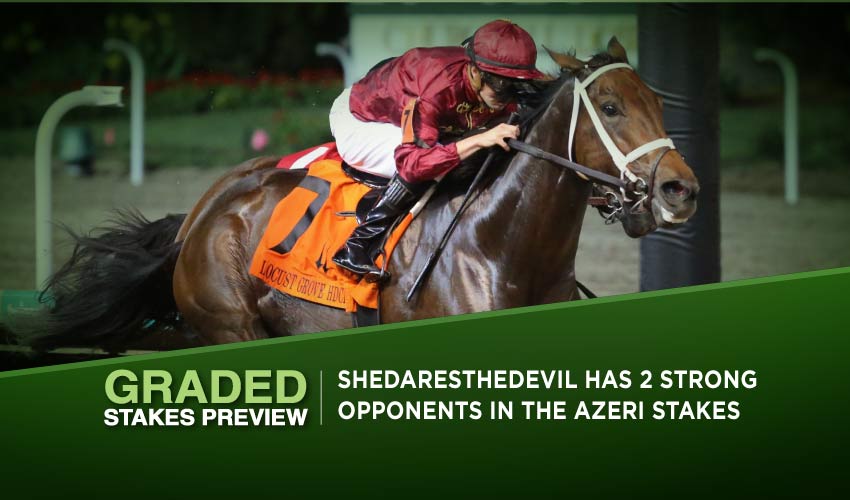 Saturday’s card at the Oaklawn Park has its pinnacle in the G2 Azeri Stakes meant for four-year-old fillies and older mares, among which the brilliant Shedaresthedevil will attempt becoming a back-to-back winner of the event. She’ll face especially multiple G1 winner Ce Ce here.

The $350,000 dirt race is open to four-year-old fillies and older mares who are about to line up in this G2 event to cover the distance of a mile and a half of a furlong. Some real stars struck gold in the Azeri Stakes, while this year’s field doesn’t lack big names either as six-year-old mare Ce Ce deserves to be mentioned right away, given she’s scored three G1 races, including the Breeders’ Cup Filly and Mare Sprint during the Breeders’ Cup 2021.

The willing and always trying chestnut trained by Michael W. McCarthy commenced the new season earlier than last year, and even though she failed to deliver in the G2 Santa Monica Stakes, she didn’t run a bad race behind victorious Merneith. Honesty, the more curious fact about Ce Ce is that the team points her towards a longer distance than she’s been seen on recently. She used to excel over the mile, so it shouldn’t stop her though, unlike the rivals as some of them possess real brilliance – we’re talking about five-year-old Shedaresthedevil who’s bagged three G1 victories as well.

The Brad Cox bound bay achieved her first grant success when winning the Kentucky Oaks, upon which she won other two races among the elite, namely the La Troienne Stakes and Clement L. Hirsch Stakes. Moreover, Shedaresthedevil recorded a narrow win in the Azeri Stakes 2021, where she defeated another star mare, Letruska.

She, indeed, didn’t perform well in the Breeders’ Cup Distaff last time out, but the race didn’t go as expected for most of the anticipated contestants, including Letruska, so the outing should be left behind, ignored, and let’s focus on what talented Shedaresthedevil shows us in the season of 2022.

It would be unfair to say that the rest of the field should be no match for the mentioned duo but they really need to improve to get into contention. Pauline’s Pearl is a solid filly, at least for the G3 company, given he’s scored two times at the stage as she also won the G3 Houston Ladies Classic Stakes is a good style in front of Golden Curl.

Still, she’s carrying the biggest weight here, unlike a duo of other four-year-old fillies who could be interesting here. We’re talking about Super Quick , who’s just an Allowance victress, but there could be more about her, while Lady Mystify triumphed at the G3 stage, beating even Pauline’s Pearl. At this moment, she doesn’t look ready to fight for the win with likes as Shedaresthedevil and Ce Ce, but she could develop into a rather good filly in the future.

Our Horse betting pick for the Azeri Stakes is:

Shedaresthedevil, who’s attempting her second victory in the race. She likes both the distance and the track and shouldn’t mind the layoff between her runs.

Follow us on Social Media for instant Azeri Stakes updates!