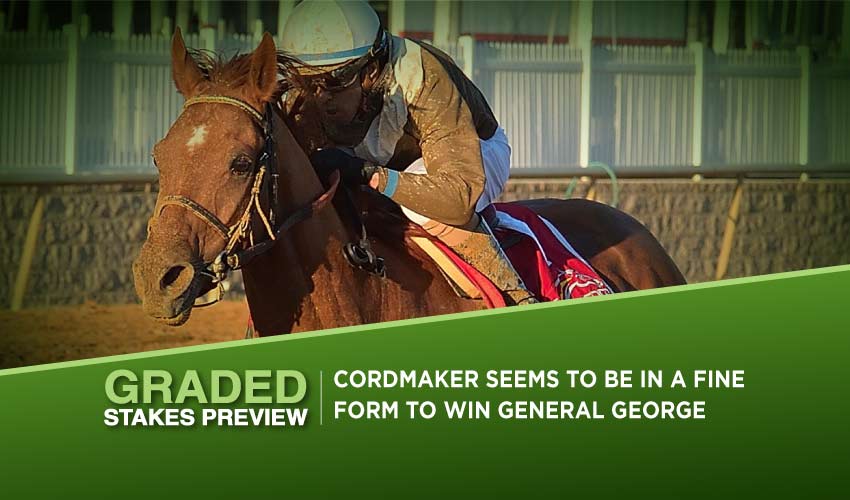 Saturday’s card at Laurel Park offers two G3 races held at the distance of seven furlongs, and even though the fields are hugely competitive, we can talk about a couple of favourites eager to add another victory to their records.

At first, five-year-old mare Glass Ceiling attempts scoring the Barbara Fritchie Stakes among fillies and mares. Subsequently, seven-year-old Cordmaker seems to be in a fine form, which he can prove in the General George Stakes.

The first G3 race of the day is open to four-year-old fillies and older mares who will compete for the purse of $250,000. On the distance of seven furlongs, eight participants will hit the dirt track, while one of the most interesting mares in the field is five-year-old Glass Ceiling trained by Charlton Baker.

The daughter of Constitution tried to score among the elite in the past but settled in the Claiming and Allowance races in the end; however, when pointed to the Listed company in autumn 2021, Glass Ceiling proved to be capable of running well there, too. On the distance of 7 furlongs, she came in second in October and then shined in the Garland of Roses Stakes at Aqueduct.

In December, Glass Ceiling began the race at the rear of the field, but as soon as the jockey urged her to improve her position on the outside, it looked like there was nothing easier for her. In the final stretch, she was already third, upon which she just swept her rivals by. In the season of 2022, Glass Ceiling kicked off with a smooth victory in an Allowance race.

Unlike her, seven-year-old Jakarta has placed in the Graded races several times, including her most recent effort in the G2 Inside Information Stakes in January, where she went for the front in the final turn to be bettered by a couple of finishing rivals.

After bagging a Listed race, Jakarta once again delivered a good effort and looked in a fine form, so if Glass Ceiling ran into some difficulties due to her late-running tactic, Jakarta could be the one to use it to the fullest.

Six-year-old Kaylasaurus is another contestant to consider as she’s been running in good form, too. After scoring an Allowance race, the bay went on to record her first Listed victory in the Willa On The Move Stakes in Laurel Park when performing an eye-catching finish from last to first.

From a seemingly impossible position, Kaylasaurus showed what she was capable of thanks to her imposing turn-of-foot. Although she failed to repeat such a performance in a black-type event, What A Summer Stakes, still taking second place wasn’t disappointing from her at all. Indeed, she looked a bit stiff in the final stage, so moving from six furlongs to seven could suit her and her running style; however, only Saturday’s race can answer that.

The last to mention is Bold Confection, a four-year-old filly who’s never lined up in a Graded race, but she’s won two Allowance races smoothly, so it’s only fair she’s about to try to succeed in this competition. Stepping up from six to seven furlongs doesn’t look to be a problem in her case.

Our betting pick for the Barbara Fritchie Stakes is:

Glass Ceiling due to her effortless victory in the Garland of Roses Stakes. A couple of her rivals look ready to score this, too, but Glass Ceiling even seems capable of further improvement

For the same purse of $250,000, seven four-year-old and older horses are about to compete at the distance of seven furlongs and on the dirt surface. The leading chance of this G3 event seems to be the seven-year-old gelding trained by Rodney Jenkins, Cordmaker, who’s been delivering pleasing efforts throughout his career.

He placed in the G3 races won some Listed events, including November’s Richard W. Small Stakes; moreover, Cordmaker looks to be running in a fine form recently. Besides the mentioned win, he bagged three black-type successes since September and overall, the chestnut is giving the vibe he’s utterly enjoying himself.

He proved that also in January when winning the Jennings Stakes for the second time; still, he grew a bit tired in the closing stages, so aiming the gelding to a shorter distance might suit him as he seems quick enough to cope with the pace from the beginning. In terms of his rivals, Shackqueenking bumped into him on a few occasions and didn’t pose a threat to him, but he’s a place contender, which applies to Threes Over Deuces as well.

The seven-year-old narrowly scored a Listed win in December but then came too late with his finish and had to settle for fourth place last time out when carrying the biggest weight. On Saturday, all participants carry equal weight with the exception of Timeless Bounty, and therefore, Threes Over Deuce could make amends for the performance.

Another participant to consider is Air Token (), victor of an October black-type who’s about to step up from six to seven furlong once again, but we’re not sure he’s about to relish it. Still, he’s suggested he’s in form thanks to his easy January win in an Allowance.

Mentioned Timeless Bounty is the only four-year-old in the field, and even though he’s a Listed winner who finished fifth in the G1 Malibu Stakes, he was far away from the victorious Flightline.

Our top pick for the General George Stakes is Cordmaker, as he’s consistent and classy enough to strike this.

Follow us on Social Media for instant General George updates!