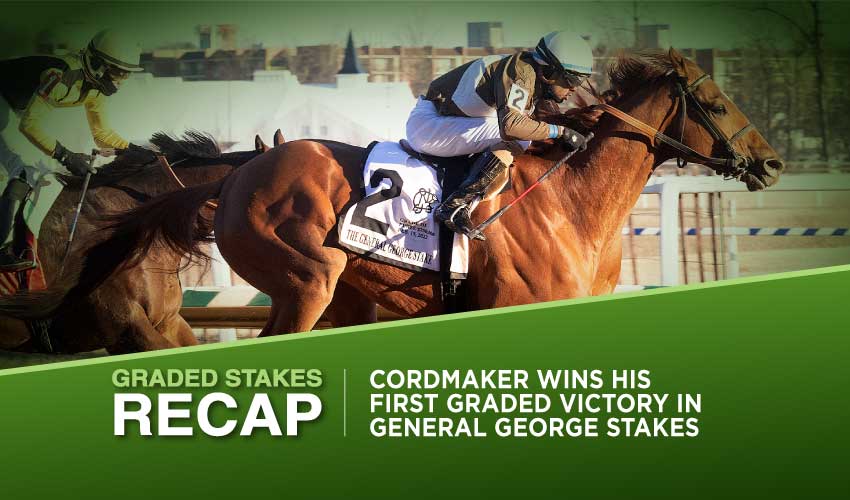 A couple of Saturday’s G3 races at Laurel Park saw no surprises as both favourites were able to deliver thanks to a certain portion of luck. At first, a spot at the beginning opened for mare Glass Ceiling, who went on to score the Barbara Fritchie Stakes in front of boldly running Jakarta, upon which seven-year-old Cordmaker achieved his premiere Graded victory in the General George Stakes.

The G3 dirt race was held at seven furlongs and welcomed a field of eight four-year-old fillies and older mares. They met up to compete for the purse of $250,000, while five-year-old Glass Ceiling (9-10) fulfilled the role of a favourite after a great ride provided by Dylan Davis. The mare trained by Charlton Baker usually starts quite badly, which was Saturday’s case as well; however, the jockey spotted a gap, pushed Glass Ceiling forward, and in a matter of a few seconds, the talented bay charged from last to second place behind leading Jakarta (4-1).

Although the favourite used to rely on her lethal finish in the final stretch, she proved to perform well even when being closer to the pace on Saturday. Therefore, after she bagged the Listed and Allowance victories, Glass Ceiling fought for her premiere G3 win with mentioned Jakarta throughout the final stretch, but in the end, she confirmed to be the best mare in the field and scored the race in 1m 23.82s. Completing a victorious hattrick, the daughter of Constitution won by a half of a length to second Jakarta, who more or less delivered the performance expected of her as she kept hard trying Fille d’Esprit (36-5) in third.

Luck and a perfect ride by a jockey played a huge role also in this dirt G3 race over seven furlongs. The purse of $250,000 attracted a field of seven four-year-old and older horses, including preferred Cordmaker (11-10) trained by Rodney Jenkins. Despite being seven-year-old, the chestnut was yet to strike at the Graded scene; however, he reached the beginning of a year in a pitch-perfect form, having Listed and black-type triumphs under his belt, to which he added another black-type in January and continued in a similar fashion in the General George Stakes.

Cordmaker didn’t have the best start, but thanks to a spot at the fence, jockey Victor R Carrasco could point his mount there, so the gelding was suddenly sitting in fourth. The pair got lucky later as well because the leading outsider Wat Tocsin (49-1) left the inner track in the turn for home, allowing Cordmaker to use it and rally forward. The favourite galloped first throughout the whole final stretch, hanging to the right a bit, so War Tocsin had to switch to his inner side; still, it looked that Cordmaker had everything under control, scoring the race in 1m 23.58s. War Tocsin crossed the wire in second, ¾ of a length behind the victory, with Sir Alfred James (57-10) grabbing a third place without posing a threat to the mentioned duo.

Follow us on Social Media for instant Barbara Fritchie updates!