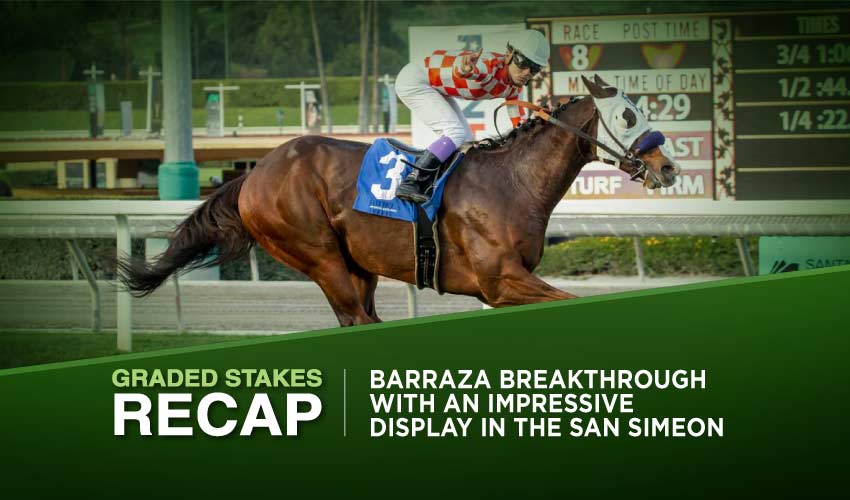 The speedy Barraza stole the show at Santa Anita on Sunday when winning his fourth consecutive race at the track, making his Graded-stakes breakthrough with an impressive display in the San Simeon. Twenty-four hours earlier, the improving Sumter had shown that he was cut out for bigger things when an all-the-way winner of the ungraded Pasadena.

There’s nothing quite as exhilarating as a horse on a hot streak, and Barraza continued to blaze a trail towards the top when completing a four-timer in the San Simeon, the highlight at Santa Anita on Sunday afternoon.

The four-year-old son of Into Mischief is climbing the ladder fast and signed for his first Graded win with relative ease, continuing his love affair with the Los Angeles track where he has now won those four straight and five in all.

Given a patient ride by substitute jockey Daisuke Fukumoto, who had never ridden over Santa Anita’s quirky downhill turf track before, Barraza – the 9-5 second-choice – was last early on behind the speedy fractions set by Bombard and came very wide on the turn, but his superiority soon told and he drew off to win going away by two and three-quarter lengths from Indian Peak, who was a half-length ahead of the favourite Beer Can Man. The time for the six and a half furlongs was 1:12 and three-fifths.

“I think he is just developing,” said trainer Vladimir Cerin. “He’ll go two turns again and I think he’ll do it just as well.”

Barraza’s only previous start at Graded level resulted in eighth place in last year’s Grade 2 Del Mar Derby, but he is unbeaten since then, a different horse, and as Cerin notes there is every chance that he can stretch out again.

Sumter stretches out, steps up

There were two questions for Sumter to answer before the Pasadena at Santa Anita on Saturday – could he stretch his stamina out to a mile and upgrade his class into stakes company? The answer on both counts was a resounding yes.

The Richard Mandella-trained colt had never gone beyond five and a half furlongs, but bettors made him the 8-5 favourite and jockey Flavien Prat rode him with no fear, taking him to the lead from the gate and staying out front throughout.

Sumter put a little daylight into the field at the eighth pole and kept on well to turn back the late thrust of Handy Dandy by three-quarters of a length, stopping the clock in 1:34 and four-fifths. Crosby Beach filled third, a length and a half further back.

“He was travelling super,” said Prat, winning his third race of the afternoon. “I think it was as impressive as last time, especially with the longer distance. That was a question but the race went well.”

Sumter is now two-for-five and according to Mandella will be pointed towards the ungraded Singletary Stakes over the same course and distance on April 2, in which the runner-up and third here may again renew rivalry.

Follow us on Social Media for instant Barraza updates!