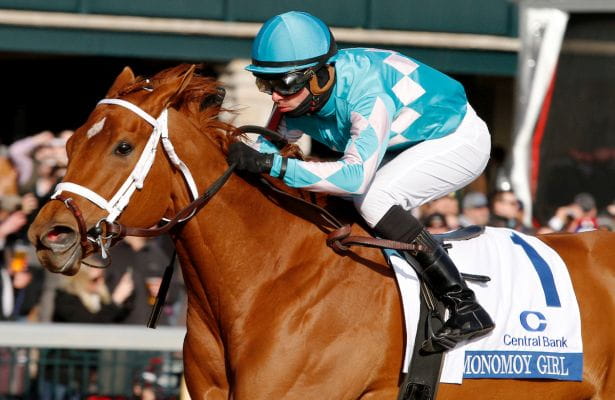 The Grade 3, $250,000 Bayakoa Stakes is one of three stakes races on Sunday’s card at Oaklawn Park. Tagged as Race 9, the event covering 1 1/16 miles is open to 4-year-old-and-up fillies and mares. It was originally scheduled for February 15 before being postponed due to harsh winter weather conditions.

The top names in the field include Monomoy Girl and Finite.

Most of the attention coming into the Bayakoa Stakes is on Monomoy Girl. Owned by My Racehorse Stable, Spendthrift Farm, and Madaket Stables, she will be making her highly-anticipated 2021 debut in the Bayakoa.

The 6-year-old mare from Tapizar is trained by Brad Cox. Her last race came back on November 7 in the Longines Breeders’ Cup Distaff (G1) at Keeneland, where she won the event for a second time.

The day following her victory, she was sold by her original connections, which included owners Michael Dubb, Sol Kimin’s Monomoy Stables, The Elkstone Group, and Bethlehem Stables.

Monomoy Girl can put up speed, with her Distaff victory resulting in a 113 Beyer Speed Figure. Prior to that performance, she registered a 107 in her La Troienne Stakes (G1) win on September 4 at Churchill Downs. In a July 11 victory in the Ruffian Stakes (G2) at Belmont Park, she registered a 113.

The runner has a total of 13 wins from 15 career starts, despite her long career, which played a role in Cox deciding to train her for one more year.

Monomoy Girl is the even-money favorite at 1/1 for the Bayakoa Stakes. She will break from the outside post under regular rider Florent Geroux.

Finite and Another Broad threaten

The biggest threat to Monomoy Girl in the Bayakoa Stakes is Finite, owned by Winchell Thoroughbreds, Thomas Reiman, William Dickson, and Debroah Easter. A 4-year-old Munnings filly, she is trained by Hall of Famer Steve Asmussen.

The multiple grade 2 winner will also make her 2021 debut, with her last race coming back on December 26. She closed out her 2020 campaign with a fourth-place effort in the La Brea Stakes (G1) at Santa Anita Park.

Finite has a total of six wins and three seconds from 12 career starts. Prior to the La Brea, she won the Chilukki Stakes (G3) at Churchill Downs on November 21. She also finished second in the October 17 Lexus Raven Run Stakes (G2) at Keeneland.

Finite’s morning line odds are 9/5. She will break from post 3 under regular rider Ricardo Santana, Jr.

The third choice coming in to the Bayakoa Stakes at 6/1 is Farefellow Farm’s Another Broad, a 6-year-old mare from Include also trained by Asmussen.

Her last race was a third-place finish in the December 26 Allaire DuPont Stakes (G3) at Laurel Park. That followed another third-place run in the November 26 Falls City Stakes (G2) at Churchill.

Another Broad will break from post 2 under regular jockey Joel Rosario.
The entire field of the Bayakoa Stakes, listed in order of post position, is Chance to Shine, Another Broad, Finite, Istan Council, Our Super Freak, and Monomoy Girl.