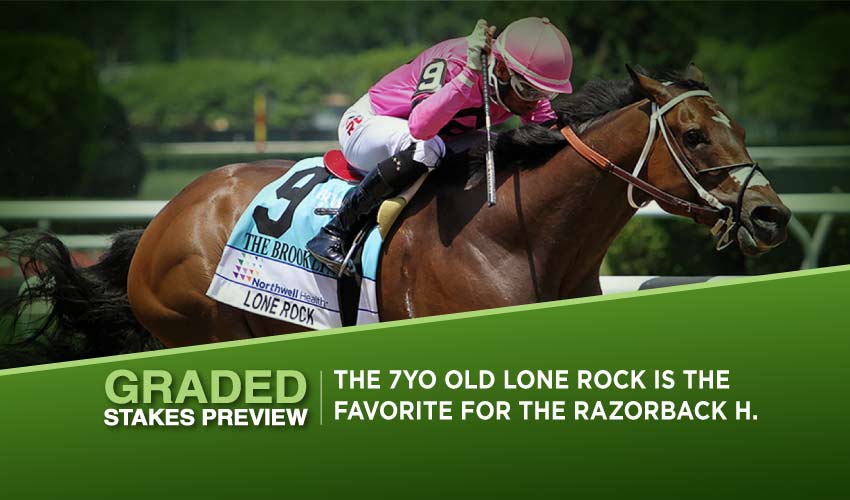 Saturday’s card at the Oaklawn Park offers two G3 dirt races, while one of them is the prestigious Razorback that attracted consistent Lone Rock who could be aiming even at the G1 Dubai World Cup.

He’s about to face some exciting rivals here, including the G1 placed duo Super Stock and Plainsman. Four-year-old filly Coach then headlines the Bayakoa Stakes where she could repeat her fine performance from her previous outing; however, there’s another interesting front-runner in the field – the G1 American Oaks scorer Queen Goddess.

First, let’s take a look at this G3 race open to four-year-old fillies and older mares. The field of seven participants will cover the distance of a mile and half a furlong, vying for taking most of the purse of $250,000. On the dirt surface, four-year-old Coach could conclude a victorious hattrick.

The daughter of Commissioner placed third in a G2 as a junior; however, she didn’t repeat such a form since, as in 2021, she collected places in Listed and G3 races, but once Brad Cox pointed her towards the elite in the G1 Kentucky Oaks, she failed to impress when finishing ninth. After that, she rested for more than six months to show up in December, securing a win in an Allowance race with the advantage of two lengths over Jilted Bride .

Coach was able to transfer her form to 2022 as she aimed at the Listed Pippin Stakes; she employed a front-running tactic once more to score the race easily, leaving Miss Bigly behind by three lengths. Currently, we can’t see Coach becoming a G1 star for the connections, yet she definitely looks prime to shine at the G3 stage, moreover, when she’s already bettered one of her most serious rivals here.

Six-year-old Miss Bigly spent most of her career in maidens and Allowance races, but as she tried her luck in more quality company in 2021, she delivered some fine performances to place there, winning the black-type Tranquility Lake Stakes at Del Mar. The Philip D’Amato trained mare then finished third in the G2 Zenyatta Stakes and G3 Chilukki Stakes. Even though she couldn’t hold a candle to Coach last time out, she still ran a good race in second.

Still, she might find it challenging to repeat the placing as the mentioned couple faces, for example, Queen Goddess trained by Michael McCarthy. The four-year-old filly has only six starts under her belt, scoring not only a maiden and an Allowance race but also the G1 American Oaks.

After finishing fifth in the G1 Queen Elizabeth II Challenge Cup in October, Queen Goddess became quite underestimated for the American Oaks; however, she demolished the field with her front-running style. If she shows something similar on Saturday, she is a victory contender here, but it’s necessary to remind that Coach is also a front-runner. Hence, there probably isn’t a peaceful race ahead of Queen Goddess.

Moreover, the field is quite competitive, so progressive Mariah’s Princess is in the mix as well as Matera who placed at the G3 scene last time out and struck gold among the Listed company in the past. Basically, She’s All Wolfe is the last to mention, while she’s the only participant whose success would be surprising. She’s bagged three black-type victories in her career, though.

Our top pick for the Bayakoa Stakes is Coach to use her early speed to lead throughout the race and draw clear of her rivals in the final stretch. In terms of snatching a fine place, we’re inclined to trust in unexposed Mariah’s Princes.

The prestigious G3 Razorback offers the purse of $600,000 to a field of nine four-year-old and older horses who will compete at the distance of a mile and half a furlong. It’s no shock that the most carrying contestant on the dirt surface is seven-year-old Lone Rock, trained by Robertino Diadoro. In 2021, the gelding was a pleasure to watch running, given he won six of eight starts, including the G2 Brooklyn Stakes and Thoroughbred Aftercare Alliance Stakes, during the Breeders’ Cup card at Del Mar.

Besides that, Lone Rock scored a Listed and two black-type races, which was also the case of his most recent run in December. Although he’s a classy specimen, a shorter distance is awaiting Lone Rock here, and he’s also shown he’s prone to lose to rivals that carry considerably less weight, but when looking at the field, it’s hard to imagine Lone Rock losing to horses like Last Samurai or Thomas Shelby who are useful, yet in terms of class, no match for the favourite.

Promise Keeper and Rated R Superstar carry slightly more than the mentioned duo, and even though the former is relatively unexposed, he hasn’t hit the track since June, so we might side with the nine-year-old veteran who displayed his ability in January by winning a Listed. Despite his age, Rated R Superstar’s form look strong enough to play a role in this race; still, it’ll be difficult for him to oppose the G1 placed duo, consisting of Plainsman and Super Stock.

Seven-year-old Plainsman has two G3 victories under his belt, while last time out, he finished third in the G1 Cigar Mile, leaving behind some big names, including Code of Honor or Ginobili. Super Stock failed to impress in the Kentucky Derby but won two Listed races since and should be capable of putting up a good effort in the G3 company.

Considering everything that was said, another factor can impact the result as not many of the participants have been out in 2022, so freshness could be something playing in Rated R Superstar’s (running the Razorback for the fifth time) and Thomas Shelby’s cards.

Our betting pick for the Razorback is Lone Rock due to his exploits in 2021, but as he’s disadvantaged over the rest of the field, we won’t be surprised if he gets bettered by any of his rivals.