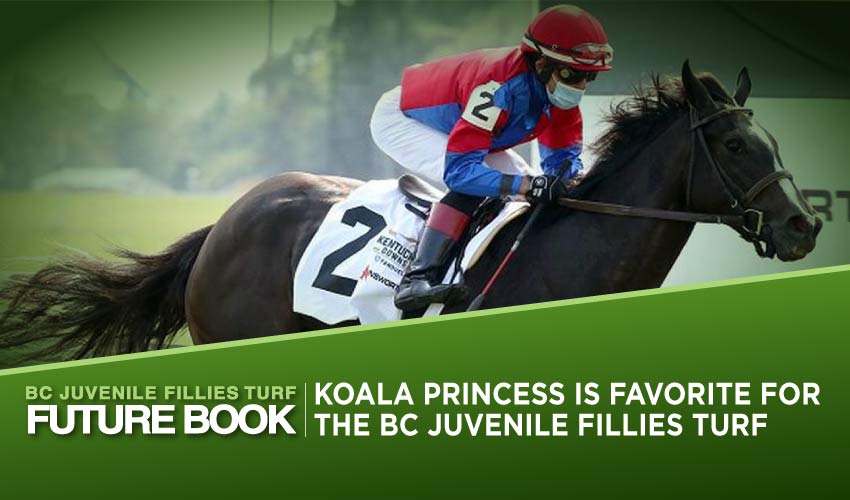 With the Breeders’ Cup at Del Mar now just over a week away, our spotlight falls upon the BC Juvenile Fillies Turf, another of the races on Future Stars Friday that features an exciting match-up between the US defense and the European raiders.

Some of the races at this year’s Breeders’ Cup have heavy, standout favourites. Think Gamine, Averly Jane, Life Is Good. Yet it’s hard even to be confident about the identity of the favourite, let alone her prospects of victory, in the Juvenile Fillies Turf, which is the most open and closely contested race of the entire weekend.

There are positives and negatives about practically every filly in the field. Take future-book favourite Koala Princess (+550), unbeaten in two and winner of a stakes at Kentucky Downs last time. She was impressive that day, coming through to lead inside the final furlong and win going away by two and a quarter lengths, but form at that unorthodox circuit doesn’t always translate well to conventional tracks, and she’s never gone further than six and a half furlongs.

Then there’s Pizza Bianca (+750), who won a Saratoga maiden over a mile-sixteenth before hitting the big league in the Grade 1 Natalma at Woodbine over a mile, where she finished off her race well but couldn’t get to grips with the winner Wild Beauty, going under by two and a quarter lengths. Wild Beauty was well beaten next time out in a Group 1 that we’ll hear more about, and the fourth horse is still a maiden from four starts.

It isn’t to say that the fillies in this race aren’t good horses, because they are. It’s just that none have yet indicated that they have the ability required to win a championship Grade 1. Success for any of them couldn’t be called a surprise.

Wide-margin Saratoga maiden winner Consumer Spending (+800) impressed visually when taking out a stakes at Laurel Park over a mile-sixteenth, driving through to win by two and a half lengths, but it was a mediocre contest and the runner-up and third were boxcar longshots. In the ‘pro’ column, trainer Chad Brown is in dynamite form and has won this race five times, four in the last seven years.

Course and distance form comes from Cairo Memories (+800), who won on debut here when ripping it up by four and a half lengths, and then kept her unbeaten record intact when turning in a similar display in a stakes at Santa Anita, clearing away to beat Helens Well (+2000) by two and a quarter lengths. This is obviously a much more competitive contest, but course and distance winners earn a big plus when there’s not a lot to go on.

The Europeans have won this race only twice, and not since 2013. This year the raiding party has substance to it and is led – on official ratings at least – by Hello You (+900), who is two-for-six and ran a lifetime best last time out when winning the Group 2 Rockfel at Newmarket over seven furlongs. She hit the front a furlong out and kept on well on the rise to the line to beat Cachet by a length and a half, looking as though the mile would suit.

The form of the British contingent is tightly tangled. On her previous start Hello You was only fourth in the Group 2 Prestige at Goodwood over seven furlongs, beaten a length and three-quarters by the battling Mise En Scene (+550), who was having just her second outing.

That success earned Mise En Scene a step up in class for the Group 1 Fillies’ Mile at Newmarket, although she couldn’t handle the brilliant Inspiral, the likely European champion two-year-old filly, who was a dominant winner. Mise En Scene was fourth, a short head behind Cachet (+1300), who outran longshot odds to post the best performance of her career. Back in fifth was the aforementioned Wild Beauty, who beat Pizza Bianca comfortably at Woodbine.

Mise En Scene found traffic problems and did her running late at Newmarket, and should flip the form with Cachet, who ran out of gas in the last 100 yards and has been beaten six times straight since her winning debut. On the numbers Mise En Scene also has the call over Hello You, but Goodwood is about as eccentric a track as you’ll find anywhere and – like Kentucky Downs – the form doesn’t always translate, and Hello You does come here off a lifetime best.

French contender Malavath (+1500) is improving with every run and won the Group 2 Criterium de Maisons-Laffitte at Chantilly with a little more in hand than the official margin of a neck indicates. She is ready to step up, but has only raced at six furlongs and only won on soft ground, so it’s a guessing game as to how she’ll cope with Del Mar’s firm-ground mile.

Jessamine could be key

Another piece of the puzzle comes with the outcome of the Grade 2 Jessamine at Keeneland over a mile-sixteenth, in which California Angel (+1000) finished like a locomotive to get up in the last jump and win by a head, with Turnerloose (+1500) a neck back in third, foiled in a blanket finish after attempting to go gate-to-wire.

That late flourish took California Angel’s record to two-for-two on turf, both at a mile or more, with her only defeat coming over six furlongs on dirt. She is obviously suited by having a fast pace to run at, which Turnerloose, easy winner of a Kentucky Downs stakes on her previous start and one of the few pace factors here, will likely provide again.

Brad Cox, winner of the Juvenile Fillies Turf 12 months ago and trainer of Turnerloose, also has Bubble Rock (+1000) in contention after she followed victory in a Saratoga maiden with a narrow success in the Grade 3 Matron at Belmont Park. She stole it late, getting up to win by a half-length, and is another – like Koala Princess and Malavath – who is going into unknown territory over a mile.

Betting Prediction for the BC Juvenile Fillies Turf

The Juvenile Fillies Turf is a minefield of potential, with pros and cons about every horse in the field. Some have stamina issues, some have class queries, and with so much in dispute the careful bettor should compensate with decent odds. Maybe CALIFORNIA ANGEL, in form and with proven stamina, can be the one.