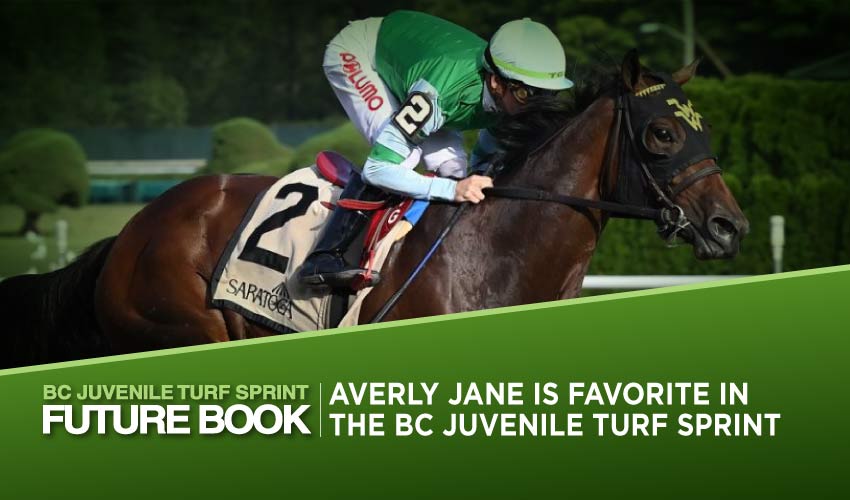 With the pre-entries known, the Breeders’ Cup fields are taking on their true appearance. Here we look at the main contenders for the BC Juvenile Turf Sprint, the relatively low-key opening race of the world championships on Future Stars Friday.

The newest addition to the Breeders’ Cup canon has yet to build substantial interest and still holds only Grade 2 status in its fourth year of existence. Neither of these potential discouragements has had any effect on trainer Wesley Ward, who has saddled the last two winners of the race and comes loaded with fillies to Del Mar.

If Ward could have designed his own Breeders’ Cup race it would be this one, and if he could design the ideal horse for the contest it might look a lot like Averly Jane (+250), who is four-for-four in a scintillating campaign that has already brought three stakes victories.

She finished her race off brilliantly to win at Churchill Downs in April, returned after a summer break to wire the field and win by seven lengths at Saratoga, and then repeated the dose on turf for the first time at Keeneland, where she was eased in the closing stages but still won unchallenged by three lengths and broke the stakes track record.

Averly Jane is fast, blisteringly fast. She gets out of the gate and goes like hell, adapted to turf last time as though she had been running on it all her life, and although this naturally represents the stiffest test she has faced, she looks head and shoulders above her rivals.

The opposition is led by barnmate Twilight Gleaming (+450), who – like many of Ward’s fastest juveniles in recent years – spent the summer in Europe. She attempted to make all in the five-furlong Group 2 Queen Mary at Royal Ascot, but the rise to the line caught her out and she was beaten a length and a half by Quick Suzy. Next time out she splashed through the mud to win a stakes at Deauville, on the lead throughout, and is expected to be suited by the return to a faster surface.

Twilight Gleaming may not have the pure speed of her better-fancied stablemate – it is much easier to get and keep the lead in Europe than it is in the US – but looks superior to Ward’s third entry Kaufymaker (+1500), who is on the also-eligible list. She made little impact at Royal Ascot against colts and has been beaten on both her starts since, latterly when a plugging-on runner-up behind Averly Jane at Keeneland.

The European challenge for a race that was designed to suit them is headed by Armor (+800), who posted a lifetime best on his sixth start when third in the Group 1 Middle Park at Newmarket over six furlongs. He didn’t get the clearest run through, but was beaten only three-quarters of a length in a blanket finish to a race that habitually crowns Europe’s best two-year-old sprint colt. He has a Group 3 win at Goodwood at this distance and his trainer Richard Hannon is as noted for fast horses in Britain as Ward is in the US.

Back in fifth at Newmarket was Twilight Jet (+2500), who has run ten times this year and holds his form remarkably well, as he showed on his most recent start when a two-length winner of the Group 3 Cornwallis at Newmarket over five furlongs. That was a lifetime best and he appeals as the type to adapt well to the different circumstances Stateside, but he is only two-for-ten lifetime and has been on the go a long time.

The filly Quick Suzy (+1200) was too quick for Twilight Gleaming in the Group 2 Queen Mary at Royal Ascot over five furlongs, finishing her race off by far the stronger. Next time out she was well down the field in a Group 1 over six furlongs at Deauville in August and hasn’t been seen since. The flying five looks right for her and if she can reproduce her Ascot form she will be a leading contender.

A drop down in distance is likely to benefit Hierarchy (+1500), who has made two big steps forward on his last two starts without winning. Last time out he led just about everywhere but the line when beaten a head in the Group 2 Mill Reef at Newbury over six furlongs, although with Averly Jane in the field he may struggle with the early pace.

The reduction in distance is also a positive for Go Bears Go (+5000), whose stamina gave out over seven furlongs in the Group 1 Dewhurst at Newmarket last time. His five-furlong form from the summer, notably when runner-up in the Group 2 Norfolk at Royal Ascot, could put him in the picture here.

Two wins on synthetics at Arlington and Woodbine preceded a switch to turf for One Timer (+1500) and he took to it brilliantly, extending his winning streak to three in a stakes at Santa Anita over five furlongs. He had too many guns for the late-closing Time To Party (+3500), who was in receipt of 4lb and three-quarters of a length back at the wire, and the extent of his ability remains unclear given his unbeaten status. Time To Party is a course and distance winner but has plenty to find if he is to flip that Santa Anita form, and must first come in off the also-eligible list, although that looks likely.

On his first start on turf Run Curtis Run (-) tried to lead at every call in the Grade 3 Futurity at Belmont Park over six furlongs, but the task proved too much and he was caught by Slipstream (first preference elsewhere) and beaten a length. A try at this flying five looks logical, although he did win a Saratoga stakes over six on dirt back in July.

Derrynane (+1200) won a stakes at Woodbine over five furlongs last time out, but the quality of that form is debatable and he was soundly beaten in a Saratoga stakes the time before. Like all two-year-olds, though, he is developing at an individual rate to his peers and he may be ready to move up again.

Early Betting Prediction for the BC Juvenile Turf Sprint

The European challenge is strong, as expected, but it doesn’t look as potent as the Wesley Ward entry and the trainer should win the Juvenile Turf Sprint for the third straight year. AVERLY JANE is a very fast filly and is a firm choice to take her unbeaten run to five.

Get a Daily Rebate and make sure to stay tuned for the latest Breeders Cup Horse racing odds, racing entries and Races results.

Follow us on Social Media for instant BC Juvenile Turf Sprint updates!