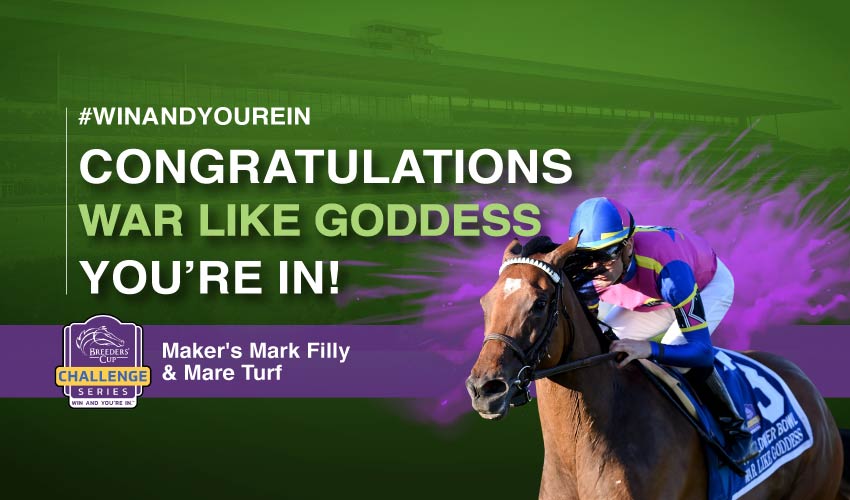 This September 4th The Spa hosted the last two Breeders’ Cup Challenge Series: Win & You’re In Jockey Club Gold Cup and the Flower Bowl Stakes, Horse Racing Tote brings you the recap of these great races in case you miss it!

Max Player already had a ticket to the Breeders’ Cup Classic, but his victory in the Jockey Club Gold Cup at Saratoga on Saturday gives him VIP credentials for the big one at Del Mar in November.

The four-year-old son of Honor Code still sits a little way behind divisional leaders Knicks Go and Essential Quality as the countdown to the Classic ticks on, but with this authoritative success comes confirmation that he is a legitimate danger to both those big names. Max Player drew off in the final sixteenth to beat Happy Saver by four lengths in a time of 2:02 and one-half, paying off at $9.60 and giving trainer Steve Asmussen plenty of encouragement with California in mind.

“That was the best to date and hopefully he’ll go better,” said Asmussen, for whom this was a fourth Jockey Club Gold Cup. “He’s matured wonderfully and he’s made a beautiful older horse. He’s getting strong and running his best races at the right time. This is who he is, and I thought this was a dominating win.”

Max Player, now four-for-11 lifetime with $1.2m in his bankroll, was making his breakthrough at Grade 1 level after several close-but-no-cigar attempts in last year’s biggest races, finishing third in the Belmont and Travers, fifth in the Kentucky Derby and Preakness. He came to Saratoga on the heels of an upset victory in the Grade 2 Suburban on a sloppy Belmont surface in July, and doubts over the veracity of that display led to his position as the third choice in the betting market.

The fractions were set by favorite Forza Di Oro, with Ricardo Santana keeping Max Player at that rival’s quarters from the gate. As they straightened up for the stretch run Santana sent his mount up to challenge and Max Player quickly took command, a length in front at the eighth pole and extending his lead with every stride. Last year’s Gold Cup winner Happy Saver, never a threat at any stage, came from some way back to snatch the runner-up spot by half a length as Forza Di Oro’s stamina gave out through the final strides.

“He ran the Suburban under different circumstances on an off track,” added Asmussen.

“For him to do this on a fast track in the Jockey Club Gold Cup is very satisfying.” One factor in Max Player’s improved form has been his prominence in races. He chased the pace in the Suburban, and those tactics worked again here for a horse who does not have push-button speed but can sustain a challenge over distance.

“Before he never breaks, today he broke good, I was really happy with him,” Santana told the Daily Racing Form. “You guys can see how different he was today, how much the best he was. All I can say is he ran his race.”

Max Player will now head straight for the Classic, Asmussen declaring that he will ship to Del Mar early to acclimatize to the warmth of southern California, the colt never having been further west than Kentucky in his life. Whether he has the class to overthrow the established order is debatable but plausible, for this is a new Max Player, a player who is now a contender.

Joining Max Player on the way west will be War Like Goddess, who earned her passage with a dominant display in the Flower Bowl, another race transplanted from its traditional home at Belmont, and a win-and-in passport for the Breeders’ Cup Filly & Mare Turf. War Like Goddess is a filly on a roll, climbing the Graded-stakes ladder step by step and reaching the top rung on her first attempt, a fine example of the measured approach characteristic of her trainer Bill Mott, winning his fifth Flower Bowl.

Two victories at Grade 3 level in spring were followed by the Grade 2 Glens Falls over a mile and a half at the Spa last month, and War Like Goddess showed she didn’t want for speed at this slightly shorter trip with a dazzling and decisive change of gear in mid-stretch.

Julien Leparoux held the four-year-old daughter of champion turf sire the English Channel a way off the pace set by La Signare, only moving closer as the field circled the far turn. On straightening up he steered War Like Goddess into daylight on the outside and she lit the afterburners, sweeping past Great Island and clearing away to score by two and a quarter lengths, stopping the clock in a tick over 2:13. Great Island held off stablemate My Sister Nat by a nose to claim the runner-up berth.

“She’s a classy filly. You can do whatever you want and she’ll still give you that punch in the end,” said Leparoux of the 2-5 favorite. “It’s nice. It’s a sign of the good ones, for sure. The Breeders’ Cup is the goal, so if she gets there healthy she’ll be going in with a big chance.”

War Like Goddess has now been beaten only once in seven starts, her sole defeat coming at Gulfstream in February on her first outing of 2021. Her entire career spans less than 12 months – she was unraced at two – and she has improved with every race, that process reaching its logical conclusion in her first Grade 1.

The Filly & Mare Turf, a race Mott has never won, a race that has been the preserve of either the Europeans or Chad Brown in the last nine years, is run at the Flower Bowl’s mile-and-three this year and War Like Goddess appears to be the best of the home team. She is expected to go straight to Del Mar without another run, Mott reckoning his filly is better fresh. Leparoux leaves it up to the boss.

“Bill Mott knows how to get them to these Grade 1s,” he added. “They took their time with her and it has paid off.”

It may well pay off again next time. Time is money, as they say.