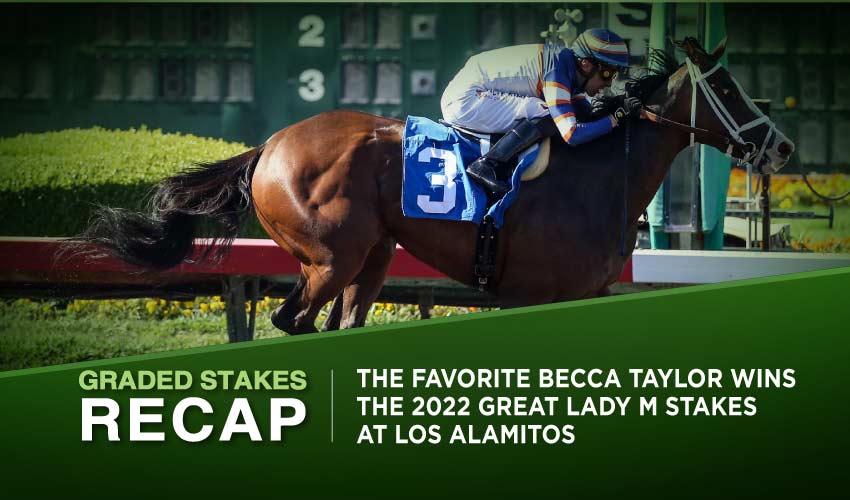 Los Alamitos on Monday afternoon was dominated by the remarkable sprinting filly Becca Taylor, who took her lifetime record to a nearly-perfect nine wins from ten starts with a comfortable success in the 2022 Great Lady M Stakes, her biggest success to date and almost certainly not her last.

Becca gets better and better

The 3-5 favorite, who likes to run on or near the pace, was fast away from the gate and quickly into her preferred spot, sharing the fractions with Brandon’smylawyer through the opening quarter before asserting around the turn.

The posse was on her almost immediately, though, with Elm Drive moving up to challenge on her outside and Samurai Charm a big danger on the inner, but Becca Taylor turned them both back and had the race to herself in the last sixteenth, crossing the line two lengths clear in a time of 1:15 and one-fifth. Samurai Charm took the silver medal, a length and a half clear of second-choice Elm Drive.

“She broke sharp again today,” said jockey Juan Hernandez. “I didn’t want to go head-and-head with the inside horse. I was able to keep her outside. She relaxed a little bit more. I didn’t want the front, but she did it on her own.”

A nose is not very much – an inch, a centimeter, a whisker – but it’s the only thing keeping Becca Taylor from being a perfect ten. That was the official margin when she suffered her only defeat, after bidding to lead all the way in a stakes at Santa Anita in March, so nearly home but nailed at the wire by Eddie’s New Dream, who will be the answer to a quiz question if Becca Taylor keeps going like this.

“That nose will haunt me for the rest of my life,” said trainer Steve Miyadi. “Her form doesn’t look like she is real speed, but she is. One day she is going to break running and wow everyone.”

Becca Taylor is already pretty high on the wow factor. Those nine wins now include two Graded-stakes victories and two state-bred stakes scores, and she has won on the main track, on the synthetic surface at Golden Gate Fields, and on turf, with her bankroll just a pocketful of loose change short of $500,000.

She can apparently do it all, and although this six and a half furlong is the furthest she’s gone, there seems little doubt she can stretch out to seven, which would open lots of doors as she seeks that G1 tag that would treble her value as a breeding prospect.

As might be obvious, Becca Taylor is named after a person, the niece of owner-breeder Nick Alexander. “She’s a very special girl,” said the doting uncle. He could just as easily have been talking about his horse.

Stay tuned for the latest Breeders’ Cup Odds. Check out the World’s major Racetrack entries, and horse racing results and don’t forget to Sign-up and get up to a 10% horse rebate. We offer the best promotions